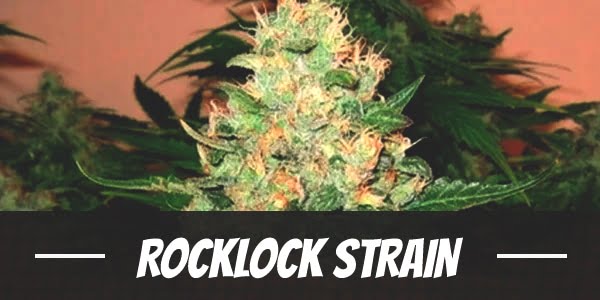 Cannabis strains come with so many weird names that having one called Rocklock does not raise an eyebrow. Yet, if one were to think of the effects that this hybrid can induce, then the reason for its name becomes apparent. On the surface, it is an Indica-dominant strain that will deliver what these types of plants do. However, there is more than meets the eye.

DNA Genetic Seeds has been around for a long time, and fans of cannabis cannot miss their name. They used two potent strains in creating Rocklock – Rockstar and Warlock.

From Rockstar, Rocklock inherited its potent Indica effects, one that is heavy hitting. At the same time, it also took some of its notable cerebral effects.

Meanwhile, the other strain, Warlock is also Indica-dominant. Even so, it possesses an interesting energizing and focused cerebral buzz that also found its way to its offspring. One thing to note too is that this particular hybrid was a third-placer in the High Times Cannabis Cup 1997. Bred to grow indoor, the same trait was also passed on.

In using those two strains, the result is one that has the best of their Indica traits while still providing an unforgettable mental buzz.

Considering that its Indica side is 80%, one would think that at best, users will feel a mild mental buzz. Perhaps that is what it is, but before getting ahead of ourselves, it is important to understand one thing. Containing up to 20% THC, Rocklock is not to mess around with especially when considering how it works.

The strain acts fast. It does not take long for users to feel a euphoric sensation rushing into the head. Not even the worst problem causing tremendous stress can stand in its way. As it surges in, it breaks down the wall that inhibits creativity. Coupled with the clarity of the mind and ability to focus, ideas can form quickly and easily.

Meanwhile, as the cerebral buzz hits its peak, the body feels heavier. Users, at this point, while feeling happy also start to feel a sense of overwhelming relaxation taking over. As a result, most users feel body stoned where the mind remains clear, and yet the numbing sensation warping over the body stops them from moving.

In most cases, for other strains, that is, the urge to sleep is too much that most drift off to dreamland. Not for Rocklock though. Many of its users, in fact, remain awake even as their body swim in wave after wave of relaxing sensation.

Lock to the couch, the buzzing mental high continues to beat on as if a portable music player is embedded in the brain playing rock music.

When it comes to its aroma, there is nothing spectacular or repulsive about the Rocklock. In some ways, the simplicity of its earthy scent that is reminiscent of hash is what makes it appealing.

While we describe its scent as being ordinary, there is none of that when it comes to how it tastes. Hash is evident and blending with it is an interesting mix of herbs, lavender, and berry. Combusted and used, it also has a sweet and spicy note.

About the only symptoms suggesting something other than the desired effects are dry mouth and eyes. Such is common with using cannabis. In some instances, though, people who use too much may feel these symptoms worsening. At the same time, they may also feel dizzy.

Other than the concerns mentioned above, there is nothing much to worry about.

Even with a much smaller Sativa side, the buzzing mental effects it delivers can wipe away stress. In essence, it makes it easier for people to deal with mental disorders and that includes PTSD and depression.

As for the numbing physical effects it delivers, an immediate benefit it gives to patients is pain-relief. It also comes with analgesic properties that make it useful in dealing with inflammation and muscle spasms.

Rocklock is a beautiful plant with its green leaves taking on a purple hue as it reaches maturity. It produces dense buds covered with orange hairs and a thick coating of sticky crystals.

Unfortunately, the plant may not be suitable for cultivation outdoor. One of the traits it inherited from Warlock is that it is specifically designed to grow indoor. As such, some people may want to try planting it in their garden, but there is no guarantee that it will thrive and produce the results they want unless they are expert growers.

Indoor, Rocklock can grow in a hydroponic setup but to bring out its best, the recommendation is to use soil as its medium. One thing that growers will want to do is to use the Sea of Green training method to enhance its growth and encourage a better yield.

Rocklock has a rather quick flowering time. As early as the seventh week, expert growers can trigger the flowering stage. Once it is ready for harvest, they can expect a yield of 18 to 21 ounces of buds.

If it takes growers with experience to cultivate this plant indoor, then it is safe to assume that the only way Rocklock can thrive outdoor is under the care of expert horticulturists. Under the right conditions, each plant can produce around 18 ounces of buds. From vegetative growth stage, the transition to the flowering stage is during the first to second week of October.

Have you ever smoked or grown your own Rocklock? Please let me know what you think about this marijuana strain in the comments below.