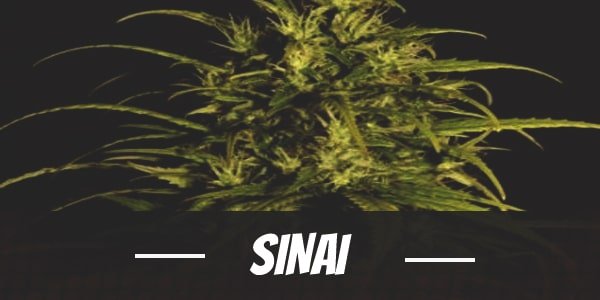 Sinai is any landrace that grows natively in the Sinai Peninsula. Its history is embedded in the stories of Ancient Egypt, where it was once used to create a hash using traditional Middle Eastern methods as it shares various traits with indigenous varieties from the area. Fertilizing, however, involved using mud or fresh camel dung.

Today, the indigenous varieties are cultivated by the Bedouin people for similar reasons. Only this time, the strain is a worldwide phenomenon especially after its introduction to the cannabis community by The Real Seed Company. While growing the landrace, some enthusiasts may come across an Indica phenotype. It is much shorter in height while its buds are heavier due to its density.

Though not as potent as modern strains, Sinai remains potent even for beginners. Its THC levels of 14% to 15% induce a clearheaded high that, in excess, can stun users with keen awareness. This is especially true when consumed as a hash, as it tends to be even more concentrated.

Typical of Sativa, Sinai’s effects act fast. It does not take long after the first toke before an uplifting sensation invigorates the user through and through. Beginning with a rush of euphoria the mind that leaves users beaming with happiness, of course.

In enhancing the mood, the upbeat disposition also brings back fun-filled memories. Coupled with a heightened sense of self-confidence, even the shyest of users turn into social butterflies. While sharing the party strain, some may even break into laughter while exchanging amusing stories and anecdotes of the past.

After about an hour or two, a tingling sensation begins to make its way down from the temples. If anything, the buzz is similar to a surge of energy coursing through the muscles. Though utterly relaxing, the body high is not at all sedating. Instead, it allows users to move around freely. This makes Sinai a great wake-and-bake strain.

Sinai has a pungent fragrance largely characterized by the smell of herbs and spices. Once the buds are either broken apart or combusted, a blend of skunk and wet soil permeate in the air.

Sinai at first has a distinct earthy flavor that is uncharacteristically sweet. Drawn in, the taste of menthol bursts in the palate and cools the mouth. Lingering after the exhale is an aftertaste of herbal spiciness.

There is always a cost when it comes to smoking marijuana. Thankfully, the price to pay for using Sinai is quite cheap. It usually involves dehydration, particularly the eyes. But, with cannabinoids interfering with the production of saliva, users will most likely end up with a cottonmouth too. The dry spell usually goes away on its own but, if symptoms persist, it can be mitigated by drinking a glass of water.

Like other potent Sativas, Sinai may induce dizziness and trigger slight paranoia. These symptoms are commonly associated with ‘greening out,’ a rare side effect that only happens when one smokes too much or miscalculates their tolerance to THC. Although, at times, it may have something to do with disposition prior to taking a hit. As such, users should always practice pacing and moderation.

Generally speaking, landrace strains do not contain as much CBD as modern strains. This is because they have not been genetically engineered to produce more of the chemical compound. However, a particular variety from the Sinai region was found to contain up to 1.5% after it was tested by a group of researchers from the Netherlands.

Having a general lack of appetite may not seem like a big deal but it is, in fact, very serious. It can be a symptom of life threatening disorder such as anorexia or cachexia and requires immediate attention. And, to this end, Sinai is very effective. After soothing away hunger pangs, its stimulating high encourages users to eat to their heart’s content.

Stress, too, is an equally important health issues that must be given due attention. After all, it is the harbinger of various problems such as arrythmia, fatigue, chronic depression, and accelerated anxiety. However, Sinai temporarily prevents further build-up by inducing a happy high. Meanwhile, its mood stabilizing effects calm the mind.

The Sinai Peninsula is a region with an unforgiving climate. Its temperatures can reach up to a scorching 50°C during the summer with the freezing winter being equally freezing. Not to mention the high levels of moisture in the air which can cause problems for plants in the long run.

Under such harsh conditions, it is hard to believe that a marijuana plant would even grow, let alone survive. But nature, working in its mysterious ways, has allowed the indigenous varieties of Sinai to live and thrive there. For thousands of years, it has built resistance against extreme weather, humidity, and pests.

As stated earlier, the pure Sativa also produces an Indica variety. Both herbs are completely different from each other in terms of structure. The former grows tall (between 4 to 6 feet) and responds best to methods like early topping and bending. Its buds too take on a similar shape. They are stretched to taper on each end and are quite fluffy.

Being such a short plant, the latter does not require any height management. It may need to be pruned and trimmed often though as it tends to be very bushy. Its nugs, on the other hand, are dense and quite small just like its stalks. Growers may have to install odor-control systems since the phenotype tends to produce a pungent smell as it hits the flowering stage.

Luckily, The Real Seed Company has successfully produced feminized seeds of the landrace strain. To prevent the whole batch from turning into males, aspiring growers can plant more seeds or apply germination methods such as presoaking. Utilizing growing techniques like Low-Stress Training will also keep female plants from turning into hermaphrodites.

As a pure Sativa, Sinai has an indoor flowering period of 10 to 12 weeks. Its Indica phenotype, however, blossoms faster. Regardless, the wait is worth it as growers typically harvest up to 16 ounces of large, airy buds per square meter.

Growers from the northern hemisphere should begin to see their Sativa flower by the first week of November with each plant producing more than 16 ounces of buds. On the other hand, those in the southern part of the world can expect their plants to bloom by the end of September yielding the same amount of nugs.

Have you ever smoked or grown your own Sinai? Please let me know what you think about this marijuana strain in the comments below.