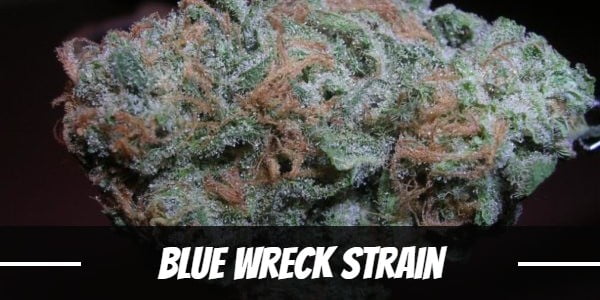 Blueberry and Trainwreck are two strains that have left a mark in the cannabis industry. The former is a world-renowned Indica-dominant herb with stress-crushing effects. Meanwhile, the latter is a potent Sativa-leaning hybrid with the capacity to ‘wreck’ its users with its cerebral high. In moderation, though, it is a great wake-and-bake strain. Now imagine what it would be like if these two buds were combined.

In Blue Wreck, these ideas came to reality. Like its parents, it boasts high THC levels with equally potent effects. Even more impressive is its fast-acting high. In only a puff or two, it sends the most experienced user soaring to new heights. Of course, this does beginners should stay away from the strain. Rather, they should practice restraint or ask a seasoned friend to pace the bud instead. Adding to its appeal is its therapeutic value.

Being a Sativa-leaning strain with THC levels of up to 24%, there are two words that best describe Blue Wreck: fast-acting and potent. Immediately after the first puff, it delivers an uplifting buzz that invigorates users through and through. Beginning with the mind, of course. As it spreads, it leaves users beaming with happiness.

The clearheaded high is not at all debilitating. In fact, it propels casual users to stay productive at work and even transforms the mind with its creative surge. With profound thoughts flowing freely, it is not difficult to come up with novel ideas and innovative solutions.

Gradually, the tingling sensation from the temples ebbs down to the rest of the body. Though intense, it does not slam users with a couch-locking heaviness. Instead, it mimics the rhythmic movement of waves. And, coupled with the rush of energy and the initial mental stimulation, it keeps many motivated to stay focused and finish tasks.

Because of its high levels of THC, Blue Wreck is very pungent. Its strong notes of fruits, particularly that of sweet blueberries, permeate in the air once its amber container is opened. Fascinating undertones of sour skunk later take over once the bud is broken apart or combusted.

Blueberry influenced much of Blue Wreck’s flavors. Drawn in, its sweet but tangy flavors of berries explode in the palate. On the exhale, however, its aftertaste is predominantly that of freshly picked blueberries.

Using marijuana always leads to a cottonmouth. And, with cannabinoids interfering with the production of moisture in the tear ducts, users will mostly likely experience red eyes too. Thankfully, both are mild and often go away with time. However, if symptoms persist, downing a few glasses of water will help.

High THC strains like potent Blue Wreck can be very disorienting. In heavy doses, it has the potential to green users out and overstimulate the senses regardless of personal tolerance to THC. Without pacing and moderation, it can trigger anxiety or, worst, paranoia.

It is not wrong to assume Blue Wreck may have been created for recreational purposes. After all, whether rightly or not, that has been the perception of marijuana for the longest time. Still, the strain is not without its medical benefits.

Its mood boosting properties, for example, induce a clearheaded high that temporarily erases negativity. In its place is an innate sense of happiness that, though temporary, comforts users suffering from depression and other mental illnesses like PTSD. Similarly, it calms the fast-paced thoughts of a person ridden with stress or anxiety. Moreover, its ability to heighten focus helps manage ADHD.

Besides affecting the behavior, the same psychoactive compounds also have significant physical impact. Its analgesic properties relieve various aches and pains including the sharp sting caused by spasms.

Typical of Sativa, Blue Wreck is a sensitive plant. Its stalks are weak while its branches are thin. While they thrive in a well-aerated garden, they are much more suited in controlled environments where they are kept away from pests and unpredictable weather.

Growing Blue Wreck indoors necessitates early topping to keep it short. And, as the plant stretches outward, growers will need to regularly prune its branches, as well as trim its leaves, to encourage better air and light circulation. This will also allow nutrients to focus their energy in producing bigger buds.

Aspiring growers will have to prepare odor-control systems though. The plant emits a pungent scent that can be quite overwhelming to those with sensitive noses.

Blue Wreck flowers between 8 to 9 weeks, faster than most Sativa-leaning strains. Once ready for harvest, its yields range from 12 to 16 ounces of buds per square meter.

Outdoors, Blue Wreck thrives and will be ready for harvest before October ends. Under the expert care of a seasoned grower, it yields at least 16 ounces of buds per plant.

What is the Blue Wreck strain yield?

How much THC does Blue Wreck have?

What are the origins of the Blue Wreck strain?

Blue Wreck was created from a mix between Blueberry and Trainwreck.

Have you ever smoked or grown your own Blue Wreck? Please let me know what you think about this marijuana strain in the comments below.