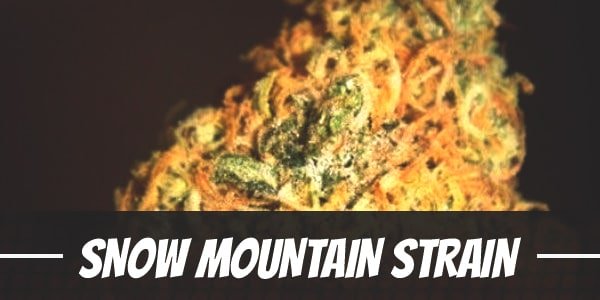 Snow Mountain takes its name from its shape. It has pointed tip and is coated all over with milky trichomes that look like snow, hinting at its impressive potency. At up to 23% THC, the Indica-leaning strain delivers an impressive head-to-toe high that takes the mind off of the day’s stress. Not to mention, it caps off the night with its sedating properties.

In creating the strain, Snow High Seeds used Snowcap to ensure it has impressive trichome production. From it, too, its offspring gained Pure Kush, on the other hand, added a subtle cerebral stimulation that keeps Snow Mountain from overwhelming the body with a couch lock. Meanwhile, the addition of an indigenous strain from Uzbekistan strengthened its growth profile.

Snow Mountain is a slow-starter whose effects do not start until 15 minutes after the first two to three puffs. Subtle at first, a euphoric buzz gradually intensifies as it swarms the mind. It uplifts the mood and leaves users feeling happy throughout the high.

After about an hour or two, a light pressure from between the temples begins to ebb down to the rest of the body. It slowly envelops users in a wave of tranquility that deeply relieves tension. Planting itself in the limbs is a heaviness that keeps one from moving from the couch. Eventually, as the physical and mental relaxation persist, users are lulled to sleep by a soothing buzz that kneads the muscles into mush.

Because of its heavy-hitting high, Snow Mountain is best reserved for nights after work or lazy days. Otherwise, it can be counterproductive during the day as users will not want to move around.

Snow Mountain has a pungent fragrance that fills the room with its strong tropical notes and floral hints. Accentuating it is a sweet pine underlined with a cooling mint. Breaking apart the bud, however, releases its sharp hash overtone that intensifies upon combustion.

Snow Mountain has a sweet smoke that entices the palate with its tropical overtones. Accentuating it are floral and herbal hints of mint. On the exhale, a blend of hash and pine leave a sharp but refreshing aftertaste.

Dryness in the mouth is an inevitable reaction that comes with using cannabis, regardless of the strain, method of consumption, and amount of buds consumed. Although mild, users can manage the symptoms by downing a few glasses of water throughout the day. Avoiding alcoholic and caffeinated drinks also help reduce discomfort especially if the dry spell persists.

Presumably, Snow Mountain is a recreational strain. After all, that has been the presumption of cannabis, whether rightly or wrongly, for the longest time. Still, it remains to be of significant therapeutic value to patients dealing with a variety of ailments.

Among its best qualities is its stress-reducing onset. It delivers a happy high that effectively uplifts the mood while calming the overwhelming dread that comes with worries. Because of this, it is also a source of comfort for patients dealing with mental health issues like anxiety, depression, and PTSD.

In high levels, THC turns into a natural pain reliever that addresses various types of aches in the body caused by either disease or disorder. It relaxes the muscles to prevent it from contracting or spasming. In turn, its anti-inflammatory properties reduce swelling and redness.

Sleep is one of the most critical aspects of the healing process. It helps cells regenerate while stabilizing turbulent hormones. Snow Mountain does not only hasten the onset of drowsiness but also improves the quality and quantity of slumber, so users wake up feeling reinvigorated the next day.

Snow Mountain takes the shape of a small Christmas tree with its single cola forming a spear-like appearance. Lining all over it are speckles of trichomes that look like snow from being white with ripeness. Meanwhile, it catches the eyes with its lush forest green hues and golden pistils.

Apart from being a stunner,  Snow Mountain is a sturdy strain with thick stalks and branches. It can withstand various unpredictable growing factors like changes in temperature and weather. For this reason, it is a favorite among outdoor growers.

Indoors, it does not need to be topped early as it is already stout. However, pruning is a must to improve aeration and light circulation in the lower nodes. Removing some leaves and branches will also enhance nutrient distribution to healthier budding sites.

It works best with the Sea of Green method which takes advantage of its short stature and compact structure to produce higher yields. Pairing it with a hydroponics set up will significantly improve trichome production and hasten the flowering period by delivering nutrients straight to the roots. For better flavor, using soil is a better option.

At the moment, Snow High Seeds has only released feminized seeds of the strain. Because of this, growers will need to perform pre-germination techniques like soaking to increase the likelihood of cultivating a female plant. Low-Stress Training, on the other hand, will prevent successful grows from turning into hermaphrodites.

TIP: Looking to buy seeds like Snow Mountain? Check out our seed bank

Snow Mountain usually matures within 9 to 10 weeks, which is a little longer compared to most Indica-leaning strains. However, depending on the conditions, it can mature a week earlier. With that said, growers can expect to harvest between 10 to 12 ounces of buds per square meter.

Flowers usually begin to appear around the second to third week of October but fully mature around the last week. Once ready for harvest, it yields at least 12 ounces of buds per plant.

Have you ever smoked or grown your own Snow Mountain? Please let me know what you think about this marijuana strain in the comments below.