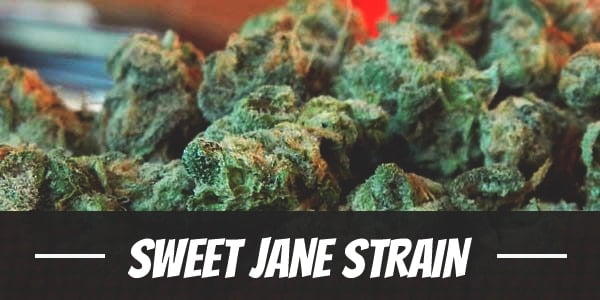 Sweet Jane is far from plain. It produces colorful buds with hints of fiery pistils against its a backdrop of lush forest green. Its calyxes are equally eye-catching. Apart from its hue, each drip with a jaw-dropping amount of sparkling resin.

Adding substance to its appearance is its high levels of THC, which peak at 20%. At that level, it can easily overwhelm inexperienced users. This is not to say that beginners should avoid the bud overall. Instead, one will need to pace consumption or smoke it in the presence of a seasoned friend.

In creating the strain, Humboldt Apothecary used a special cut of Island Sweet Skunk to produce its energizing head high and tropical flavors. It also profoundly influenced its ease of growth, high yields, and therapeutic benefits.

Sweet Jane is a quick-acting strain that delivers an uplifting buzz within minutes after the first few puffs. It surges throughout the body in waves and reinvigorates tired spirits. Its onset, however, is mainly cerebral.

The behavioral change is immediately noticeable. Smiles extend from ear to ear as the stimulating head high boosts moods. At the same time, the upbeat disposition inspires a sense of happiness that sweeps away cobwebs in the mind. With renewed focus and a piqued interest, users complete tasks for long periods of time without feeling tired.

It is best to have snacks around while using Sweet Jane. Its intense mental stimulation can be quite hunger-inducing especially as it takes up energy. Having food nearby, preferably an arm’s length away, will prevent users from breaking concentration.

After about an hour or two, a tingling sensation from behind the eyes begins to trickle down from the temples. It relaxes the muscles as it relieves tension in its wake. Eventually, the initial head high takes a step down while a relaxing buzz takes over. Planting itself in the limbs is a heaviness that makes the eyes droop.

In spite of its energizing Sativa buzz, Sweet Jane is a strain that is best used in the late afternoon or early evening. Its come down is deeply tranquilizing and heavy-hitting. In all likelihood, users will end up falling asleep on the couch after a quick brainstorming session.

Sweet Jane is as sweet as its name sounds. It has a subtle saccharine undertone with impressive floral overtones. Broken apart or combusted, it tantalizes the nasal senses with an intense citric mix of grapefruit, lemon, and mangoes.

Dominating the palate at the first puff is the floral taste of crushed roses. It is accentuated by the sweet flavors of ripe fruit that intensify as the smoke swirls inside the mouth. On the exhale, it leaves a tropical aftertaste reminiscent of a lemon-mango blend with sprinkles of grapefruit skin.

Using marijuana usually comes with red eyes and a parched mouth. Seasoned users often ignore the dryness due to its typicality. Still, one may down a few drinks throughout the day to manage its symptoms. Water is preferable as alcohol or caffeine tend to exacerbate the problem.

At times, users of Sweet Jane may also experience a headache. It is mostly due to its powerful effects disorienting the mind especially while moving around. In such cases, it is best to pace consumption of the bud while staying still on the couch or the bed.

Stress relief is among the top reasons that enthusiasts cite when asked about cannabis consumption. To this end, Sweet Jane works perfectly. It has a holistic high that goes above and beyond to appease a myriad of maladies. Moreover, with a CBD content of up to 2%, it is easily among the top go-to medicinal strains in the market.

Its happy high delivers a calming euphoria that stabilizes turbulent emotions while slowing down the fast-paced thoughts that come with stress or anxiety. For this reason, it can be a source of comfort for long-sufferers of depression and other mental health issues like PTSD.

In invigorating the mind, the same psychoactive compound also stimulates the appetite. Thus, one of the best times to use the strain is right before a meal. Through it, patients with cachexia or eating disorders like anorexia can eat heartily.

Sweet Jane also relieves a variety of aches in the body. Its analgesic effect relaxes the muscles and prevents it from contracting painfully. Meanwhile, its anti-inflammatory properties reduce redness and swelling.

Sweet Jane grows tall but is not at all lanky. It can withstand a variety of unpredictable growing factors such as humidity-related problems like mold or mildew. Meanwhile, strong gusts of wind sway its branches and stem but not break it off. Instead, the light pressure makes the plant sturdier.

The Screen of Green works best with Sweet Jane. Through it, growers can increase yields by creating more budding sites while providing support. Pairing it with a hydroponics setup significantly hastens the flowering process. However, aspiring growers with an inkling for taste may choose soil as a growing medium to encourage terpene production instead.

Sweet Dreams lives up to its moniker. It delivers a deeply tranquilizing physical buzz that tucks users to bed within hours after the first puff. Read our full review!

Like other tropical strains, Sweet Jane prefers a warm, semi-humid climate where the sun shines for at least 8 hours during the day. With that said, it may take a longer time to mature when cultivated in the northern hemisphere due to the lack of sunlight as well as short days. Moreover, growers will have to invest in a temporary enclosing that will protect the batch from frost that might potentially kill it overnight.

Sweet Jane has an indoor flowering period of 10 to 12 weeks. Although the wait is long, it rewards growers with a vigorous yield of 12 to 16 ounces of buds per square meter.

Due to its propensity for a Mediterranean climate, Sweet Jane blossoms late when cultivated in the northern hemisphere. Flowers usually begin to show up from the last week of October and fully mature by the middle of November. Each plant is expected to produce at least 16 ounces of buds per plant.

Have you ever smoked or grown your own Sweet Jane? Please let me know what you think about this marijuana strain in the comments below.