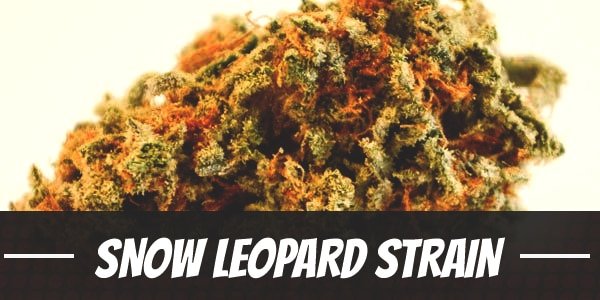 Snow Leopards are magnificent creatures that roam mostly in the mountain ranges of Asia. Equally stunning is its namesake strain Snow Leopard which has slowly begun to dominate the cannabis industry with its potent THC levels. Drawn in, its flavorful smoke induces a profound high that leaves users feeling inspired as the body is totally released from inhibition.

In creating the strain, Bodhi Seeds used the legendary Tigermelon and world-famous Snow Lotus. The former is a three-way cross that contributed to its offspring’s complex flavor profile. Meanwhile, the latter contains genes from an indigenous variety from Uzbekistan, a country located in central Asia, that improves its growth profile and further strengthen its sturdy structure.

Snow Leopard is one of the most famous ‘creepers’ in the industry. Its effects do not begin until 15 to 20 minutes have passed after the first few puffs of its delicious smoke. Because of this, users should be cautious while using the Indica-leaning strain especially as it can be quite intense with its 21% to 30% THC.

In moderation, however, its effects are quite pleasant. It clears the mind with a rush of euphoria that leaves users feeling happy. Smiles return to one’s face while giggles escape the mouth over the most minute reasons. The uplifting buzz lasts for hours and readies users for the upcoming body buzz. After about an hour or two, a light pressure trickles down from the temples. It crashes into the muscles like waves tranquilizing the shore. Soothing and calming, it gently cradles users and blankets one in deep relaxation. Keeping it from overwhelming the body and causing a couch lock is the initial head high that continues to persist.

Snow Leopard has a delicious tropical fragrance that entices the nasal senses with the sweet aroma of ripe fruit. Accentuating it are notes of damp soil with hints of refreshing but woody pine.

Snow Leopard’s smoke washes over the palate with the taste of earth and wood. It has refreshing overtones of pine with a tropical twist of berries and fruit. On the exhale, it leaves a sweet aftertaste that lingers in the mouth for hours.

Red eyes are a common side effect of smoking cannabis along with a cottonmouth as cannabinoids begin to interfere with saliva production. It is usually mild and barely noticeable but, if symptoms persist, users may down a few glasses of water to manage the dry spell.

Although rare, users may also experience dizziness and anxiety. It can sometimes develop into a subtle feeling of paranoia if left unattended. Apart from one’s disposition before the high, another factor that can green users out is the dosage. As such, one should pace the consumption of the bud.

Stress is a common problem that people deal with on a day-to-day basis. In small to moderate levels, it can be a catalyst for change. However, once it becomes chronic, stress can lead to the development or exacerbation of problems like heart disease, hypertension, depression, and anxiety. As such, it is essential that one takes a day off to release any of the accumulated stress.

In high levels, THC also turns into a natural painkiller. Together with its CBD content, it appeases a myriad of aches and pains throughout the body beginning from the temples. Meanwhile, its anti-inflammatory properties reduce redness and swelling.

Sleep is one of the most critical aspects of the healing process. It helps cells regenerate while simultaneously stabilizing turbulent hormones. Through its sedating properties, Snow Leopard not only hastens the onset of drowsiness but also improves the quality and quantity of sleep, so users wake up feeling energized.

Snow Leopard is a sturdy plant. Though short, it has sturdy branches and stalks that are not fazed by unpredictable growing factors such as changes in temperature and weather. Not to mention, it remains resilient against light breezes that may topple it. For this reason, it is a great beginner’s strain to grow outdoors.

Indoors, growers can control temperature, lighting, and humidity to bring out its full potential. One may also choose the type of medium, such as soil for better flavors or hydroponics for a quicker flowering period. The latter will also significantly increase yields and positively impact trichome production.

Tigermelon is a potent strain that secures itself in the hearts of enthusiasts with its sweet-tasting smoke and head-to-toe effects.

It works best with the Sea of Green method as it is short and compact. By placing more plants in a single square meter, indoor growers can significantly increase yields. Although it does not need to be topped early, it will need to be pruned often to prevent moisture in between its crevices from turning into mold or mildew. Installing a proper ventilation system will also help aerate the room. Removing broad fan leaves and branches enhances light and nutrient distribution.

At the moment, Bodhi Seeds only released Snow Leopard’s seeds in regular form. Because of this, users need to utilize pre-germination methods such as soaking to increase the chances of producing female plants. Low-Stress Training, on the other hand, will prevent successful grows from turning into hermaphrodites.

Snow Leopard has an indoor flowering period of 8 to 10 weeks. It produces between 10 to 12 ounces of buds per square meter once ready for harvest. Under the expert hands of a seasoned grower, however, it can yield more at a faster rate.

In the northern hemisphere, Snow Leopard blossoms from the second to the last week of October. Growers can expect the plant to yield at least 12 ounces of buds at harvest.

Have you ever smoked or grown your own Snow Leopard? Please let me know what you think about this marijuana strain in the comments below.