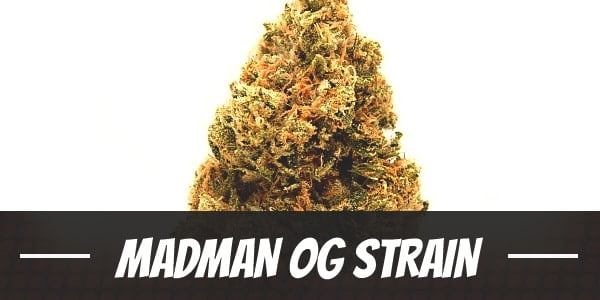 Madman OG sounds like an intimidating strain and, understandably, it might be. It has one of the highest levels of THC in the industry and, if used beyond limits, it can be devastating especially for first-time users. This is not to say beginners should stay away from the strain. Rather, having a seasoned friend around to pace consumption of the bud.

In creating the bud, the breeders from Ocean Grown Genetics used  OG Kush as a genetic base. From it, Madman OG gained a complex flavor profile along with its signature tangy flavor and fragrance. At the same time, it also improved its head high.

LA Confidential was later added to the cross. The Indica-leaning bud contributed to Madman OG’s potency as well as strong bodily buzz. Additionally, it provided the strain with impressive therapeutic effects that provided comfort to patients dealing with disease or disorder.

Madman OG is one of the most potent but versatile strains. In moderation, its THC levels of 16% to 24% can deliver a pleasant head-to-toe high. However, it can quickly turn into an overwhelming experience when used beyond limits.

During the initial onset, Madman OG induces a gentle rush of euphoria that uplifts the mood. It clears away negative thoughts that cloud the mind and, instead, stimulates the once-idle cogwheels to bring back cheery memories. Often, users end up smiling from ear to ear as giggles escape the happy user’s mouth.

After about an hour or two, a soothing buzz from behind the temples begins to ooze down to the rest of the body. It kneads the muscles and frees it of tension or tightness. Although intense, keeping it from leaving one in a couchlock is the initial head high that continues to persist. In all likelihood, users will want to spend the day with like-minded friends.

Madman OG has a pungent earthy scent that can quickly fill the room after breaking apart the buds. Enhancing it is a refreshing undertone of pine with a tangy hint of sourness. Interestingly, it releases an overtone of coffee upon combustion.

Madman OG coats the palate with the flavor of damp earth and an undertone of woody pine. There is a subtle sourness in its smooth smoke but, on the exhale, it leaves an aftertaste of coffee.

Apart from the usual dry eyes and cottonmouth, users may also experience dizziness and anxiety. At times, in inducing heightened sensitivity and keen awareness, it can develop into a subtle feeling of paranoia. Going beyond one’s tolerance is usually the main, but a person’s disposition can also influence it before the high. As such, moderation and pacing is a necessity.

It comes as no surprise that Madman OG delivers a significantly therapeutic high that appeases a myriad of maladies. After all, it is the creation of medical cannabis breeders Ocean Grown Genetics.

Among its best uses is relieving stress through its euphoric buzz. It uplifts the mood while calming anxiety-inducing thoughts or dread. As such, it can help manage symptoms of mental health issues such as depression or PTSD.

The same psychoactive compound that delivers the initial head high also relieves various aches and pains in the body beginning from the temples. In relaxing the muscles, it also stabilizes a turbulent stomach that can lead users from vomiting due to cramping. For this reason, it is a source of comfort to cancer patients dealing with the nauseating effects of chemotherapy.

The freedom from mental and physical inhibition lulls patients to sleep. Madman OG’s sedating properties enhance the quality and quantity of slumber, so one wakes up feeling reinvigorated the next day.

Madman OG exhibits qualities of both Indicas and Sativas. It is of medium height and, although compact, allows air into the lower nodes. Still, it needs to be pruned and manicured, so light reaches the branches below. Removing branches and some fan leaves also improve nutrient distribution for healthier budding sites.

It works well with both the Sea and Screen of Green method. The former maximizes upon its relatively short structure by placing more in a single square meter. Meanwhile, the latter manipulates the plant’s shape to create an even canopy. Either way, the two training techniques will significantly increase yields.

One can also choose between different types of mediums. One of the most popular is soil which encourages terpene production for better flavors. There is also a hydroponics setup that delivers nutrients directly to the roots. Through it, plants grow bigger, yield higher, and flower faster.

In spite of its propensity for a sunny environment, Madman OG can thrive in the northern hemisphere. It is sturdy, with thick stalks and branches that do not break at the weight of its buds or when facing strong winds. However, having a temporary enclosing will protect the plant from harsh weather such as frost which can kill the plant overnight.

Indoors, Madman OG blossoms 8 to 10 weeks after initiating the flowering period. Growers can expect it to produce between 12 to 14 ounces of buds per square meter.

In the northern hemisphere, Madman OG flowers between the second to the last week of October. Once ready for harvest, it yields at least 14 ounces of buds per plant.

Have you ever smoked or grown your own Madman OG? Please let me know what you think about this marijuana strain in the
omments below.