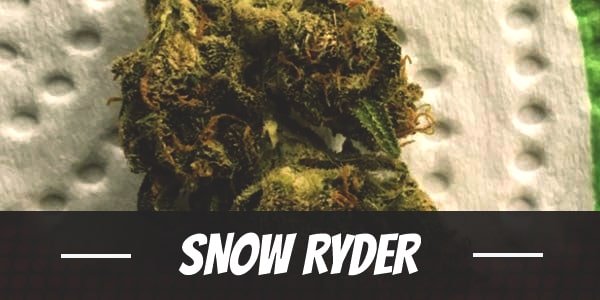 Snow Ryder is a ride or die strain for many growing enthusiasts. It produces sumptuous buds that cater to a variety of palates and psychedelic preferences. Not only that, it matures quickly regardless of the season or needs of its growing environment due to its auto-flowering genes without sacrificing its trichome production.

Although its genes remain undisclosed due to breeder secrecy, there are many who speculate that Sensi Seeds used LowRyder and Snow White. Regardless, it is a well-loved strain that garnered a name for itself for its effects and therapeutic benefits.

Snow Ryder is a versatile strain with THC levels that range from a mild 12% that is suitable for beginners to a powerful 23% that challenges veterans. Its onset is quite slow though. Rather than a head-slamming high within seconds after the first two to three puffs, it is a gradual uplifting buzz that slowly fills the mind with happy thoughts.

The behavioral change is immediately noticeable once the initial cerebral effects have settled. A smile forms in one’s face as soothes waves of euphoria gently rock the mind back and forth.  It leaves the body feeling completely at ease and deeply relaxed. Moreover, it unties knots in the muscles so users can indulge in a sense of tranquility.

A heaviness eventually plants itself in the limbs as the bodily effects continue to intensify. It makes the eyes droop while kneading the muscles into a soft mound. In all likelihood, users will want to flop on the couch and drift off to dreamland. However, depending on the dosage, the liberation from mental and physical stress can be an arousing experience.

Snow Ryder smells strongly of pepper. A single whiff of its spicy overtones tickles the nasal senses. Meanwhile, its cooling undertones of mint accentuate its herbal undertones. It later releases an earthy but fruity scent when broken apart or combusted.

Drawing in Snow Ryder is like taking a sip out of tonic juice. It is refreshing with its citrus flavors and tangy lemon but it is soon followed by an herbal overtone. As the smoke swirls, it develops into a cooling mint with spicy undertones. An aftertaste of earth lingers in the mouth for hours after the exhale.

Dryness in the eyes and the mouth are two common experiences users of all levels share as a result of cannabinoids interfering with the body’s natural ability to produce and retain moisture. Although unavoidable, growers can manage its symptoms by staying hydrated throughout the day and avoiding alcoholic or caffeinated drinks.

In sharpening the senses, Snow Ryder can sometimes overwhelm the mind. When moving too fast, users may experience dizziness. As such, users should make sure to stay in a comfortable spot before lighting up a bowl of the bud.

Chronic stress is a problem that affects various people all over the world. If left unattended, it can exacerbate problems like hypertension, high blood pressure, heart attack, and stroke. Not only that, it can lead to the early onset of depression and worsen symptoms of anxiety. As such, it is essential that it is released before it accumulates to high levels.

In this regard, Snow Ryder is a source of comfort. Its soothing euphoria appeases the overwhelming dread that comes with stress and anxiety. Simultaneously, it uplifts the mood while stabilizing turbulent emotions. Because of this, it helps manage symptoms of depression, PTSD, and other mental health issues albeit temporarily. For long term relief, approaching a health professional is still a better option.

In high levels, the same psychoactive compound that induces a happy high also turns into a natural painkiller. It eases aches beginning from the temples and delivers a relaxing buzz throughout the body. Through its antiemetic properties, it tranquilizes muscle spasms to prevent it from contracting uncontrollably.

The freedom from mental and physical inhibition eventually leads to a feeling of drowsiness. Like being gently cradled to sleep, the Indica-leaning strain slowly makes the eyes droop until it closes. With its sedating properties, it improves the quality and quantity of sleep so users wake up feeling energized.

Because of its sturdy structure and auto-flowering nature, growers of all levels can cultivate the strain in different conditions. It flowers best outdoors where it can soak up the sun’s light. However, aspiring breeders can easily replicate the organic environment indoors by adjusting crucial growing factors like lighting and temperature while managing humidity.

It is important to trim Snow Ryder often. Its bushiness can sometimes hinder light distribution and airflow in the lower nodes. If left unattended, any moisture stuck in between its crevices can develop into mold or mildew that will eventually stunt its growth. Worst, it can leave the root to rot that will lead to its death. However, removing certain broad leaves and branches contributes to better aeration. Not to mention, it circulates nutrients better.

Snow Ryder is a great candidate for the Sea of Green method. It is short and bushy with adequate side branching. Through it, growers can maximize yields by providing its single cola more time to flower and produce buds. Growers can also use different types of mediums such as soil for improved flavors or hydroponics so the roots can absorb nutrients directly resulting in a healthier plant that is free of pesticides.

Snow Ryder has an indoor flowering period of 6 to 8 weeks. Once ready for harvest, it produces at least 10 to 12 ounces of buds per square meter. Using the Sea of Green method can significantly increase yields especially under the expert care of a seasoned grower.

It takes 6 to 8 weeks for the auto-flowering Snow Ryder to fully mature regardless of where and when it is grown. If the plant is started around early Spring, then it will reach full maturity around middle of September. With that said, growers can expect at least 12 ounces of buds per plant.

Have you ever smoked or grown your own Snow Ryder? Please let me know what you think about this marijuana strain in the comments below.