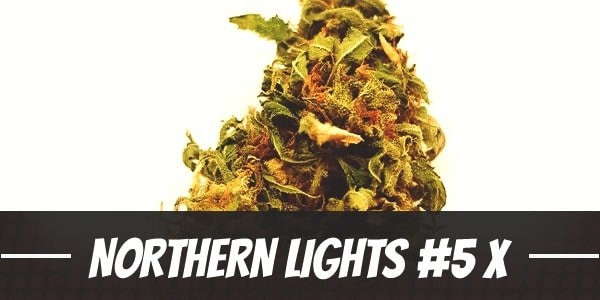 Northern Lights # 5 and Haze are two illustrious strains that have dominated the cannabis industry. The former is a Hall-of-Famer that induces a stress crushing tranquility with a heavy-hitting high that aids sleep. Meanwhile, the latter for its distinct Sativa high and diverse lineage. Not to mention, its creative buzz makes for a great wake-and-bake companion. However, it has a long flowering period and a lanky structure.

In crossing the two, Sensi Seeds created Northern Lights # 5 x Haze. Like its Sativa parent, it induces a keen awareness that starts the creative process while improving focus and productivity. It is a vigorous producer too, with a shorter maturation time and sturdier stalks that can withstand a variety of growing conditions.

Northern Lights #5 x Haze has a quick-acting onset that begins almost immediately after the first two to three puffs. It begins with a subtle rush of energy that intensifies as it spreads throughout the body. The behavioral change is instantaneously visible. Users, feeling happy from within, smile from ear to ear.

The upbeat disposition and mental clarity is also a wonderful addition on a workday. It not only takes away any of the accumulated stress of daily life but also brings out a fresher perspective. Free-flowing thoughts form into profound ideas and innovative solutions that reinvigorate one’s zest for work. Its ability to pique interest also ignites focus along with a keen awareness.

Gradually, a light pressure oozes down from the temples and fortifies the initial buzz of energy from the onset. It reinvigorates users with its uplifting effects while relaxing the muscles thoroughly. Without tiredness weighing down the body, one moves like a well-oiled machine.

Northern Lights #5 x Haze has a pungent scent with a hint of spice. Breaking apart the buds produces an earthy overtone with strong undertones of woody pine. Meanwhile, combusting it releases its herbal profile.

Drawn in, Northern Lights #5 x Haze invigorates the palate with the savory flavors of spices and herbs. Enhancing it are complementary notes of earth and pine which, on the exhale, leave a woody aftertaste.

A cottonmouth and dry eyes are common as a result of cannabinoids interfering with the body’s natural ability to produce moisture. The slightly parched effect is mostly mild and often goes away after a few hours. But, if symptoms persist, users may down a few glasses of water throughout the day to manage the dry spell.

Greening out is also another side effect that comes with using Northern Lights #5 x Haze. It is a condition characterized by dizziness due to a keen awareness to one’s surroundings. In rare cases, it can develop into a subtle feeling of anxiety especially for people prone to worrisome thoughts. For this reason, it is better to start low before gradually increasing dosage.

Presumably, Northern Lights #5 x Haze is a recreational bud. Still, this does not mean it is devoid of therapeutic potential. Its THC, as well as CBD and other cannabinoids, provide temporary relief to patients suffering from a myriad of maladies.

Its happy high, for example, uplifts the mood and clears the mind of overwhelming dread. Hence, it is a great source of comfort for people with mental health issues like depression, PTSD, and anxiety.

Similarly, it can also appease symptoms of stress including fatigue. Its soothing buzz as well as calming qualities ease aches and pains in the muscles as a result of mental and physical exhaustion. Not to mention, it reinvigorates the body through and through. As a result, it also brings back the appetite of patients suffering from cachexia as a result of disease or eating disorders like anorexia.

Climate and location are two of the most important factors when it comes to growing Northern Lights #5 x Haze. It prefers a Mediterranean climate where the days are long and the sun shines for hours. This is not to say the plant will not thrive in the northern hemisphere. Rather, it may take longer to flower due to the lack of sunlight and cooler climate.

For this reason, growers prefer cultivating the strain indoors where adjusting factors such as temperature, lighting, and humidity are easier. One can also choose between mediums such as soil, coco coir, and hydroponics. The first is great for bringing out its full flavors meanwhile the last two hasten the flowering period as well as improve yields.

Another way to increase budding sites is to use the Screen of Green method. This requires placing a screen on top any and removing branches or leaves that go beyond it. Topping the plant early will also keep it short as its height spurts during the flowering phase.

Northern Lights #5 x Haze has an indoor flowering period of 8 to 10 weeks. It produces at least 5 ounces of buds per square meter. Under the expert hands of a seasoned grower, it can produce much more.

In the northern hemisphere, Northern Lights #5 x Haze matures between the second to the last week of October. Growers can expect each plant to produce at least 5 ounces of buds per plant once ready for harvest.

Have you ever smoked or grown your own Northern Lights #5 x Haze? Please let me know what you think about this marijuana strain in the comments below.