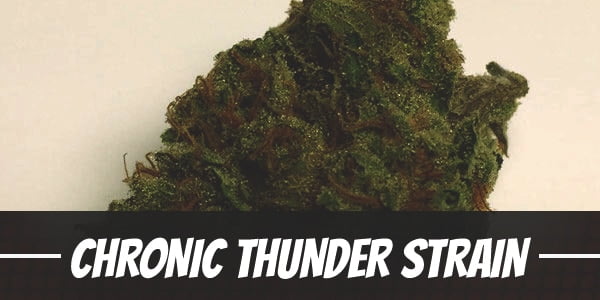 Hearing the word ‘Chronic Thunder’ can instill fear in one’s heart. It brings out memories of the flashes of dancing lights in the sky as well as the plant’s trichome frosted buds, which allude to its immense potency of up to 20% THC. In moderation, however, it is quite a pleasant strain to smoke for an evening of relaxation.

Its moniker alludes to none other than the famous Chronic and Alaskan Thunder Fuck, the two legends that Barney’s Farm crossed. The latter is a potent Sativa with a creeping onset that delivers a buzz of energy throughout the body after it has settled. Meanwhile, the former is a balanced strain with a worldwide reputation for its amazing grow.

Apart from being a wonderful recreational strain, Chronic Thunder is a great introductory plant to growing cannabis. It is sturdy, with thick stalks and branches, and a high resistance against fluctuations in weather. Its high-yielding capacity, including dense buds and huge colas, are heavily influenced by its parent Chronic.

Chronic Thunder’s effects do not begin until after 15 minutes have passed from the first puff. For this reason, it is important to pace consumption. Otherwise, the pleasant high its THC of up to 20% induces can turn into an overwhelming experience.

During the onset, it delivers a euphoric buzz that spreads all over the mind until worries are cleared. It uplifts the mood too and, as such, users are left feeling happy from within. Although it takes quite a while for its head high to show up, the behavioral change is immediate once it has settled especially as smiles begin extend from ear to ear.

To others, the liberation from mental and physical inhibition and subtle boost in confidence can turn an otherwise simple night into an evening of romance.  For this reason, Chronic Thunder is also a great bedtime companion to be used with a loved one.

In spite of its uplifting and subtly energizing effects, it is still best to avoid using the strain in the morning or early afternoon. Its heavy-hitting high is counterproductive to a day filled with work.

Chronic Thunder has a pungent scent that is laced with a strong diesel. Undertones of spices like pepper and cinnamon accentuate its subtle sourness. Broken apart or combusted, it releases an earthy aroma that can easily fill the room.

Chronic Thunder has a sharp diesel that, when drawn in, can lead to coughing. Softening it is the subtle taste of wet soil and sweet cinnamon. On the exhale, it leaves a spicy aftertaste reminiscent of pepper.

Apart from the typical dry eyes and cottonmouth, users may also experience a condition called greening out. It is characterized by a temporary dizziness that can develop into a subtle feeling of paranoia as one’s sensitivities continue to persist. Most of the time, however, the effects are limited to a headache. Still, it is better to start with low before gradually building up the dosage.

Chronic Thunder is a strain with impressive pharmacological benefit. Its therapeutic value lies in the effects of cannabinoids, particularly that of its THC and CBD, provide a reprieve against a myriad of afflictions.

Its happy high reduces stress by clearing the mind then uplifting the mood. It calms the overwhelming dread brought about by work, school, and life in general as well. Similarly, it provides comfort to patients dealing with depression, anxiety, and other mental health issues like PTSD.

The same psychoactive compound, when concentrated at high levels, turns into a natural painkiller. It appeases a myriad of aches and pains beginning from the temples, including headaches, cramps, and knee-jerking contractions. And, through its anti-inflammatory properties, it reduces redness and swelling. Not long after the freedom from mental and physical inhibition, the eyelids become heavy as users increasingly become drowsy. Its sedating effects not only hasten the onset of sleep, but also enhance its quality and quantity.

Grown outdoors, Chronic Thunder can withstand a myriad of unpredictable growing factors. A light breeze and slightly strong winds, for instance, help strengthen its branches. Meanwhile, the natural sunlight and change of weather in the northern hemisphere triggers a change in colors. So long, of course, it is protected against frost with a temporary enclosing. Otherwise, it might die.

Chronic Thunder is not a tall plant. In fact, its height peaks around 2 to 4 feet throughout the whole growing process. It rarely needs to be topped early even when cultivated in limited spaces. However, it may have to be pruned often.

Being naturally bushy, the plant can sometimes harbor moisture in between its crevices which can develop into mold or mildew if left unattended. Removing certain broad leaves, as well as dead branches, will circulate light and air into the lower nodes better. Not to mention, it also redistributes nutrients to healthier budding sites. Installing a powerful ventilation system to manage humidity also helps.

The Sea of Green works best with Chronic Thunder’s short stature. This requires placing at least four plants together in a single square meter to create It hastens its already short flowering period as well as further improve its yields.

Chronic Thunder’s dense buds get heavier as it matures during the flowering period. Thus, although its branches are already sturdy, it is highly recommended that aspiring growers provide additional support – either through staking or trellising – to keep it from breaking into two.

It takes 7 to 9 weeks for Chronic Thunder to fully bloom. Growers can expect at least 17 to 21 ounces of buds per square meter.

Chronic Thunder flowers between the last week of September to the middle of October. Once ready for harvest, it yields at least 21 ounces of bud per plant.

Although its flowering period is already short, it is possible for seasoned growers to see buds bloom a week earlier.

Have you ever smoked or grown your own Chronic Thunder? Please let me know what you think about this marijuana strain in the comments below.