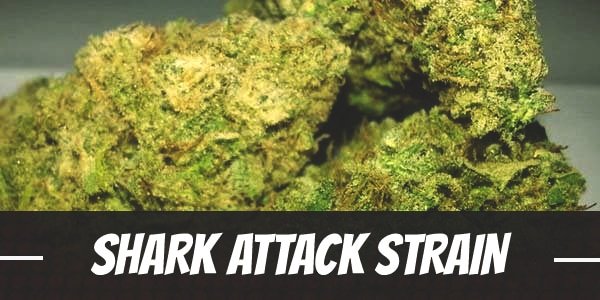 Shark Attack is a strain that may have it all. It has moderate to high levels of THC that range from 12% to 16% with a copious concentration of CBD. Growing enthusiasts can count on it too. It is an excellent high-yielder that can grow in any condition. In fact, it even won 1st prize at Copa Cannabis Uruguay 2015 for the Indoor category.

Of course, nothing short is expected of the Super Skunk and White Widow cross. The two are among the cannabis industry’s best growing strains with each being a vigorous producer pf buds and trichomes.

Shark Attack begins with an uplifting cerebral onset that leaves users feeling happy from within. It starts as a rush of euphoria that clears the mind of negativity. Replacing it are cheery memory that keeps the mood upbeat.

For casual users, the mental clarity creates free space for thoughts to flow and form freely. It piques interest while drawing inspiration from the surge in ideas. With renewed motivation, completing tasks without breaking concentration becomes an easier chore.

After about an hour or two, a tingling sensation from the temples begins to trickle down to the rest of the body. It removes tension in its wake while untying knots in the muscles. It contributes to the heightened focus by bringing back one’s initial limberness.

Because of its great wake-and-bake qualities and mellow high, Shark Attack can be used at any time of the day. So long as it is used moderately, of course. Otherwise, it can be quite unpleasant.

Shark Attack is a pungent strain with strong hints of hash and earth. Enhancing it is an herbal overtone of crushed flowers and spices blended together. Broken apart or combusted, it releases a tangy but subtle lemon that eventually fills the room.

In the palate, Shark Attack bursts into a myriad of flavors that are dominated by a sharp hash and soothing earth. Accentuating it are floral and herbal notes that soften the spiciness. On the exhale, it leaves an invigorating aftertaste of lemon

As cannabinoids begin to interfere with the body’s moisture production, a cottonmouth becomes an inevitable side effect of using cannabis. Accompanying it are red eyes too and dizziness. Although the dryness goes away on its own, users can still manage the symptoms through hydration if symptoms continue to persist throughout the day.

Greening out is also possible when using Shark Attack. It is characterized by a subtle feeling of paranoia or a headache that develops when one either uses too much or moves too quickly. Thus, apart from avoiding high doses, a prerequisite to consuming the bud is to be comfortable.

Shark Attack is a highly therapeutic strain. Its CBD levels, which average between 5% to 10, provide holistic benefits to patients dealing with a myriad of afflictions. Among its best uses is relieving aches and pains, either as a result of disease or disorder, from all over the body beginning from the temples. Its analgesic properties relax the muscles to prevent it from contracting uncontrollably or cramping.

Apart from the physical, Shark Attack also has positive effects on the mind. It makes for a great stress reliever that calms fast-paced thoughts made out of worries or the overwhelming dread that results from it. Through a similar mechanism, it manages symptoms of depression and other mental health issues like anxiety or PTSD.

Sleep is one of the most critical aspects of the healing process. It helps cells regenerate faster while stabilizing turbulent hormones. Shark Attack’s sedating properties plant a comfortable heaviness in the limbs that enhance the quality and quantity of slumber, so users wake up the next day feeling refreshed.

Like other Indica-leaning strains, Shark Attack can withstand the brunt of various unpredictable growing factors. Its thick stalks and branches do not break off easily at strong gusts of wind or the weight of its heavy buds. And, although it prefers a Mediterranean climate, it can easily thrive in the colder weather of the northern hemisphere.

If anything, only moisture will be a problem. Due to its dense canopy, it can harbor water from the air in between its crevices that will later develop to mold or mildew without proper aeration. Indoors, it is important to prune and thin out the plant especially indoors for better light circulation and ventilation in the lower nodes.

Shark Attack is a good candidate for the Sea of Green method. It is short, compact, and can be placed close together in a single square meter. Through it, growers can significantly increase yields, especially when paired with a hydroponics setup which delivers nutrients directly to the roots. Soil, on the other hand, is an excellent option for enhancing its overall flavors and scents.

When it hits the flowering stage, the herb produces small, popcorn-sized buds that sometimes taper on one end. It has a lush green color with strikes of fiery pistils. Lowering the temperature, however, will bring out its striking hues of purple and gold.

Shark Attack has a short indoor flowering period of 7 to 8 weeks. However, growers can delay harvest by a week for the plants to produce more buds. Once ready for harvest, it yields at least 18 ounces of buds per square meter.

Cultivated in a garden or farm in the northern hemisphere, Shark Attack fully matures from the last week of September to the early October. However, allowing it to flower for one or two more weeks will increase yields significantly. Growers can expect 21 to 34 ounces of buds per plant.

What is the Shark Attack strain yield?

How much THC does Shark Attack have?

Shark Attack was created from a mix between Super Skunk and White Widow.

Have you ever smoked or grown your own Shark Attack? Please let me know what you think about this marijuana strain in the comments below.