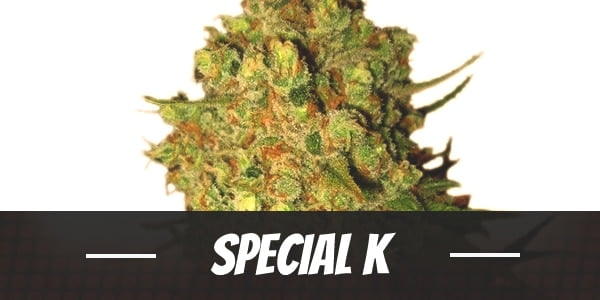 At various points in life, there is always something remarkable. One moment after another, some treasures are for people to cherish forever. On that note, that may as well be what the Special K strain is all about. A few tokes and it takes users on a memorable trippy ride.

Sagarmatha Seeds, an outfit based in Amsterdam, has been in the business for more than twenty years. As such, their team of experts indeed knows what they are doing. In developing Special K, they did not have to look beyond their doorstep. That is because among the many award-winning hybrids they have created, there are two standouts that they could use.

Slyder, while not available in the market today, remains in the stable of the breeder. Using it as one of the bases, they could not have picked a better Indica. In its genes, it contains the heritage of an Afghani, which they had crossed with Northern Lights to produce a hybrid that growers can plant outdoors.

Sagarmatha Seeds then paired it with one of their best Sativa – Western Winds. On the process by which it came to be, the breeder has not released more detailed information except that it is a descendant of Kali Mist. As such, it exhibits the best traits of Haze – a lineage that brings on an incredible Sativa experience.

Special K from Sagarmatha Seeds is not to be confused with another hybrid that goes by the same name bred by Royal Dutch Genetics. A quick look at its genetic lineage shows that they used different strains (OG Kush x Northern Lights).

On its structure, Special K is an almost balanced hybrid. Looking at it physically, it suggests that it leans towards the Sativa side as it is quite tall. The same is also true when it comes to its effects. It first takes users on a borderline extreme psychedelic high before gradually settling down. Interestingly, the published 18% THC, while very high, does not even come close to the most potent strains in the world. For that reason, unsuspecting users get caught off guard with its intense high.

At its onset, it begins with slight pressure on the temple and may cause the eyelid to feel heavy. Without warning, it slams the mind with a euphoric buzz making it an excellent wake-and-bake strain. As the high continues to intensify, it inspires creative thoughts and empowers users to be on the go.

As the high starts to spread from the head, users start to feel uplifted besides being upbeat and energized. Not only that, but Special K also promotes a sense of well-being that swings the mood.

Gradually, the buzzing high begins to creep into the body. It causes muscles to relax leading to a state of bliss. Used in moderation, most people should remain productive. However, should one end up using a tad bit more, then it may lead to a couch-lock. Not to mention, the intensity of the head buzz may be too overwhelming in which case it becomes difficult to do anything. In other words, the cerebral experience becomes one that is on the extreme end of psychedelic.

Special K with its incredible high is quite underwhelming when it comes to its fragrance. It does not have that kick that perks up the senses, but what it does have is a refreshing, earthy scent with a sweet note.

Once combusted and drawn, a citrusy note blends with its sweet and earthy taste. Some people may even catch a hint of sandalwood lingering as an aftertaste.

Special K is yet to hit the mainstream market much like some of its ancestors like Northern Lights. As such, reports of its adverse effects is limited. However, being marijuana, users can expect to feel their throat drying as well as having red eyes.

Although there are no reports as of yet, some other possible conditions that may occur include having a mild headache or feeling slightly dizzy. On whether the strain can cause anxiousness or not remains unclear.

Like others, Special K is no different when it comes to pharmacological use. It does not appear to have remarkable CBD content hence much of its benefits are due to the psychedelic effects.

As a wake-and-bake strain that quickly puts users on a euphoric high, people can use it to combat depression and similar conditions. After a couple of tokes, choosing to continue with the self-pity nonsense is not even an option. That is because of the overwhelming happiness and well-being that conquers the mind and the body.

Other possible uses of Special K could be to help fight off fatigue. After all, it does deliver an energy-boosting high.

When it comes to the plant structure, Special K is more a Sativa in that it grows well over 6-1/2 feet tall. It also means that its flowering period will take at least one or two weeks longer than typical Indica plants.

At any rate, it is not at all a complicated plant so as long as growers have rudimentary knowledge and skills cultivating marijuana.

It takes 9 to 11 weeks during the bloom stage before growers can even think of picking its buds. During harvest, growers can expect its yield per square meter to be between 12 to 14 ounces.

Cultivated outdoors in a dry and warm climate, Special K starts flowering in October. Each plant can produce 14 ounces of buds or more.

Have you ever smoked or grown your own Special K? Please let me know what you think about this marijuana strain in the comments below.