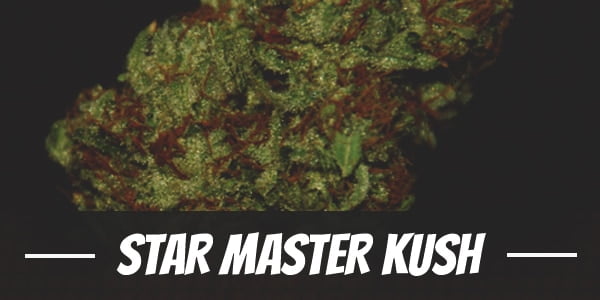 Only a handful of strains have genetics like Star Master Kush, an Oregon-born herb cultivated with love for the cannabis community. While most are crossed from two distinct strains, Zion Cannabis takes it up a notch by using four – Medicine Man, Sensi Star, Master Kush, and Platinum Kush.

All are Indica-dominant and lend to their offspring’s stress-crushing body buzz. Living up to their potency is Star Master Kush’s impressive THC levels. However, much of its therapeutic value from Medicine Man while amplifying the effects of the rest.

Star Master Kush is an impressive Indica-dominant strain with the superb cerebral effects of its parents combined. It remains a slow-starter though that prefers surprising users with a sudden boost in moods. Those who deliberately take note of its onset, however, will notice a euphoric rush that clears even the deepest recesses of the mind.

Later into the high, Star Master Kush’s Indica effects begin to creep in. It starts with a subtle tingling sensation from the temples that travels through the muscles until the body is completely engulfed in relaxation.

Keeping the soothing buzz from incapacitating users is the earlier psychedelic high. But with THC levels ranging from 17% to 24%, it remains powerful enough to lock many in place.

Star Master Kush is an absolutely pungent strain. Even from its container, it fills the air with a strong skunky aroma with woody undertones of pine. Broken apart or combusted, it emits a similar scent to soil lightly damped by drizzle.

Carrying over to Star Master Kush’s flavors is its strong note of skunk. While there is a subtle fruity sweetness, it remains surprisingly earthy with obvious overtones of herbal spices. On the exhale, it leaves a concoction of pine and lemon lingering in the palate.

It is always a great idea to have a drink in hand while using marijuana. This is because, regardless of the strain, it always causes dehydration. Moisture-inhibiting cannabinoids usually affect the mouth the most but some users will experience their eyes dry. While they usually go away on their own, hydrating with a few cups of water can greatly relieve the symptoms. However, alcohol and caffeine can exacerbate the reactions.

Given the profound medical benefits of its lineage, it is not astonishing to find Star Master Kush profess the same level of therapeutic value. For example, its uplifting high increases the natural happy chemicals of the brain and, in doing so, relieves stress. It also makes mental health issues like depression, anxiety, and PTSD temporarily manageable. Of course, the underlying reasons for one’s problems will remain long after the high subsides. For this reason, it is important to seek the help of a professional.

As a powerful Indica-leaning strain, Star Master Kush possesses an impressive ability to relax the muscles. Not to the point of debilitation, however. Rather, it works perfectly well with the initial mental high and places users in a state of calm. This soothing effect lulls most to sleep, but it can sometimes urge people to eat and can even ease the sharp sting of spasms in the stomachs of those with food-deprived bodies.

The strong Indica heritage of Star Master Kush means it is a short plant with strong branches and quite a bushy structure. Its buds take on a similar shape in that they are as dense as rocks. A striking sight, each sports an eye-catching light green hue perfectly contrasted by orange hairs. However, it is its thick coat of trichomes and dripping resin that truly catches the eye of the beholder.

Growing Star Master Kush is not at all difficult. Its hardiness means it grows well in either indoor and outdoor settings. However, most commercial growers prefer cultivating their strain inside controlled environments for its ease of environmental adjustments.

With that said, the plant easily adapts to different growing mediums such as soil and hydroponics. Some areas may necessitate early topping due to limited space. In which case, applying the Sea of Green method will maximize each square meter by helping the herb produce more buds.

What is difficult though is acquiring seeds of Star Master Kush. In spite of all the goodness it provides, its seeds are rarely ever in the market. But, aspiring growers can still get ahold of the strain through clippings from a mature plant provided by a trusted source.

Generally speaking, Start Master Kush flowers anywhere between 7 to 9 weeks. However, depending on the skill level of the grower, it can extend up to a week. Once mature, it yields up to 12 ounces of buds per square meter.

Have you ever smoked or grown your own Star Master Kush? Please let me know what you think about this marijuana strain in the comments below.