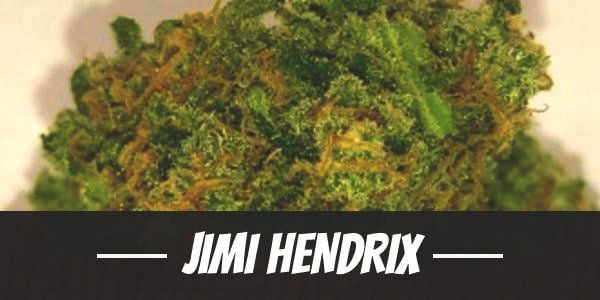 Jimi Hendrix is one of the, if not the most, innovative electric guitarists of the world. His work is incomparable and many aspiring musicians look to him with inspiration. His influence extends far beyond the music community, even into the cannabis industry. Like his energizing music, his namesake strain is equally stimulating. It keeps users upbeat and matches the invigorating effects of each riff.

Such is only expected of the Sativa-leaning hybrid. After all, it is a cross between three premium mainstays. First is Jack Herer, a tribute strain that delivers a creative buzz. There is also the Indica-leaning Headband that influenced Jimi Hendrix’s soothing body high. Finally, to enhance its yields, the third and final bud – Black Cherry Soda – was added.

A fast-acting strain, Jimi Hendrix delivers a jolt of energy throughout the body right after the first puff. Its initial onset, however, is marked by a euphoric rush that is largely focused in the mind. Replacing all negativity is a sense of unparalleled happiness.

While some bask in their upbeat disposition, many casual users prefer to stay productive. The mental clarity, after all, is a gateway to enlightened thoughts. With ideas moving freely, it is not uncommon to find oneself overflowing with creativity.

In time, a warm uplifting sensation ebbs down from the temples. In waves, it invigorates each muscle until it is free of tension. Eventually, users are enveloped in a deep relaxation. Nothing of the lethargic sort though as it allows many to move around freely.

Jimi Hendrix is a versatile hybrid with a buildable high. Its THC levels goes from 14% to 17%. This makes it great for beginners looking to increase their tolerance. But, at the same time, it is potent enough to mentally stimulate seasoned users.

Without taking into consideration its color, one would easily mistake Jimi Hendrix for lemons. Its sweet citric scent alone is enough to convince many of it. Moreover, its undertones of wet soil make the buds seem freshly picked from the garden.

In the palate, its smoke bursts into a variety of citric flavors including lemons and oranges. Sour at first, it later melts in the mouth with a ripened sweetness and a kick of spice. On the exhale, an aftertaste of refreshing pine and rich earth lingers.

It is always great to have a drink before the first puff of marijuana. After all, cannabinoids will always inhibit the production of moisture regardless of the strain. Such compounds affect the eyes and the mouth the most but both usually go away with time. However, if symptoms persist, a few glasses of water will do the trick.

Some may also ‘green out’ while using Jimi Hendrix. In such cases, one may experience either dizziness or a subtle feeling of anxiety possibly brought about by the strain’s cerebral effects. While this is rare, it is never good to overconsume marijuana or underestimate one’s tolerance to THC.

Jimi Hendrix is a remarkable strain. Not only because of its electrifying buzz, but also for its healing qualities that provide a reprieve against a variety of medical afflictions such as chronic stress. By enhancing the mood, it calms the mind and takes away the overwhelming dread brought about by anxiety. For this reason, the Sativa-leaning bud works as an anti-depressant as well.

In inducing its recreational high, Jimi Hendrix also soothes away various aches and pains in the body such as those caused by headaches, cramps, and fatigue. In the gastrointestinal tract, it relieves the stomach so food passes through easier. At the same time, it restores the appetite of people with eating disorders or patients undergoing chemotherapy.

Jimi Hendrix is a tall plant that has problems fitting into most indoor growing spaces. For this reason, topping the plant is early so growers can manage the sudden growth spurt that occurs once the flowering phase begins.

The Sheriff packs a punch that is strong enough to topple even the mightiest of outlaws. Read our full review!

Other than that, Jimi Hendrix is quite an easy grow. Though thin, its stalks and branches are sturdy and can withstand problems caused by sudden drops in temperature. Not only that, its branchy structure provides enough support to carry on the weight of its heavy buds and resist strong gusts of wind.

Organic mediums like soil will enhance the flavor of Jimi Hendrix when harvested right away. Extending the flowering period will produce higher yields but may slightly affect the overall flavor of the bud. Growers also have the option of using hydroponics to produce clean nugs free of any trace of pesticides.

It takes approximately 10 to 12 weeks of flowering for Jimi Hendrix to mature. It produces between 12 to 16 ounces of buds per square meter. However, applying the Screen of Green method will not only maximize space but also increase yields.

Garden has grown Jimi Hendrix plants usually flower around the second or third week of October. But, depending on the climate, it can blossom as late as the first week of November with each plant yielding at least 12 ounces of buds.

Have you ever smoked or grown your own Jimi Hendrix? Please let me know what you think about this marijuana strain in the comments below.