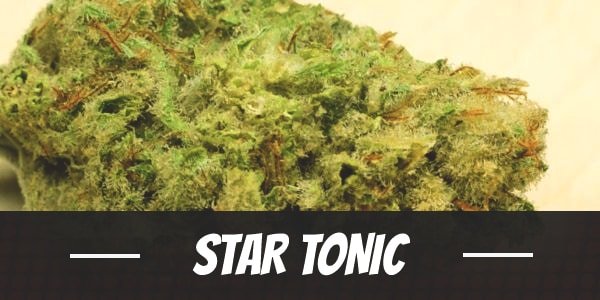 Tonics are more than just a fad. They are medicinal substances that stimulate and restore vigor. Star Tonic acts in the same manner in that, a puff of its CBD enriched smoke, delivers a soothing mental and physical buzz that generally enlivens users.

Though its breeders remain unknown, its knack for providing relief to patients can be traced to Cannatonic – one of the most prolific strains in the field of medical marijuana. Its chemical profile contains high levels of CBD that provide relief to patients with mental and physical conditions. Crossing it with Death Star, however, brought its power into full force. After all, the latter is a destroyer of planets.

Though created for therapeutic purposes, Star Tonic retains enough THC to be of recreational value to users especially beginners. However, it is a slow starter just like its parent Death Star. Although, that could likely be the result of its low THC levels of 8% to 9%.

Most seasoned users do not notice the onset. But, generally speaking, the bud does induce a subtle cerebral buzz. It mentally uplifts users with its rush of euphoria but, at the same time, it also clears the mind.

With thoughts flowing and forming freely, it is not uncommon for users to experience a surge in creativity. The mental clarity also heightens focus and, along with the relaxing body buzz, allows users to concentrate for longer periods of time without feeling tired. As such, the strain is perfect for staying productive throughout the day.

Because of its high CBD content, Star Tonic has strong undertones of wet soil that fill the air once the bud is broken apart or crushed. For the most part, however, it smells of citrus and sweet lemons.

Toking Star Tonic is like drinking a glass of vitamin-filled orange and lemon juice. It is absolutely enriching with sweet flavors that turn sour as the smoke is savored. On the exhale, it leaves an earthy aftertaste with a hint of herbs.

Dehydration is a common side effect marijuana that is often reflected in the form of dry eyes. To some degree, some users also experience a cottonmouth especially as moisture-inhibiting cannabinoids begin to interfere with the production of saliva. However, both are mild. Not only that, they are barely noticeable while in the middle of the high.

Still, if symptoms persist hours after the last hit, rehydrating with a drink will immediately ease symptoms. Nothing alcoholic though as it can green users out. A shot of espresso, or any caffeinated drink for that matter, can also exacerbate problems. In such cases, water is the best option.

With up to 15% CBD, Star Tonic is an exceptional therapeutic strain with healing properties that appease various mental and bodily issues. According to a 2018 study by the Washington State University, it is high THC and high CBD strains like it that are deemed most valuable in the medical community.

Star Tonic contains anti-inflammatory properties that reduce swelling and redness. By doing so, it effectively reduces muscles from suddenly contracting due to pain from its surrounding areas. Moreover, its soothing body high relieves various aches beginning from the temples.

When unattended to, chronic stress can lead to further complications. One example of which is severe depression. After all, the overwhelming anxiety that comes with being overworked has a negative effect on moods, behavior, and the body. However, through its mood-enhancing and stabilizing high, Star Tonic temporarily manages both as well as other afflictions like anxiety and PTSD.

Most medical strains are not available for sale as seeds. Their original breeders keep a proprietary hold on them to keep others from producing fake merchandise. This practice also assures users that the Star Tonic they are purchasing contain high levels of CBD.

With that said, it is easy to determine Star Tonic growth profile through its structure and classification. As a hybrid, it brings out the unique traits of both its Indica and Sativa genes. Though tall, its height rarely requires early topping except in the rare occasion of a growing space being too small. In such cases, cutting the vegetative period short will keep the plant from outgrowing its designated area.

Classified as a medical strain, it is likely that Star Tonic is cultivated indoors. This is not to say the plant does not perform well outdoors. In fact, it is quite sturdy in spite of its lankiness. However, it requires the stability of controlled environments to maintain its chemical profile. Keeping hygrometers all around the room will ensure that a balanced ratio between temperature and humidity. Applying either the Sea or Screen of Green methods will maximize the growing space and encourage more budding sites.

Star Tonic is a quick flowering plant that blossoms within 7 to 9 weeks. Once ready for harvest, it yields between 9 and 14 ounces worth of cured buds per square meter.

Like other plants, Star Tonic thrives in an outdoor environment with a fair amount of sunshine. Usually, flowers begin to bloom from late September to the second or third week of October with each plant producing at least 9 ounces of buds.

Have you ever smoked or grown your own Star Tonic? Please let me know what you think about this marijuana strain in the comments below.