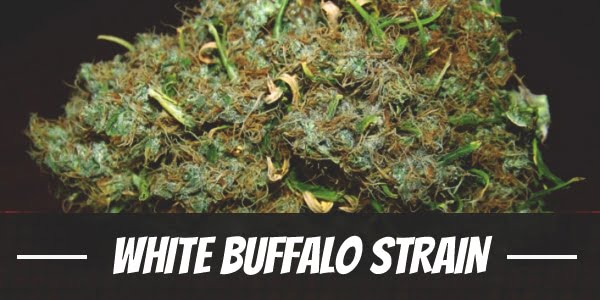 White Buffalo is a sacred symbol worshipped by Native Americans of the Great Plain Regions. Sadly, the albino animal is a rare sighting. In the cannabis industry, there is a Sativa dominant that goes by the same name and is equally elusive. Its effects, however, are well documented for its energizing qualities.

Equally fascinating is White Buffalo’s ancestry. It is the love child of two Indica leaning buds and a single predominantly Sativa strain. From Romulan and Blackberry Kush, the herb inherited its quick flowering traits as well as its sturdy structure. Meanwhile, its intense mental stimulation is the influence of Bay 11.

Apart from its immaculate effects, White Buffalo also retains significant medicinal value. Its stimulating cerebral high is one that provides comfort to many enthusiasts going through the motions of life.

White Buffalo’s THC levels are quite high, especially by today’s standards. It can go from a tolerable 15% to a debilitating 25% in only a few puffs. While regarded as a seasoned user’s staple, beginners may still enjoy the strain by using it with caution.

With that said, the initial onset begins almost immediately after the first toke. It is characterized by a stimulating euphoric high that enhances moods and promotes overall positivity. It is not uncommon to see users radiating happiness from within.

Gradually, a tingling buzz comes down from the temples in waves. Though subtle, the uplifting sensation is invigorating. Each toke intensifies the energizing effects until each and every muscle is of tension. Deeply relaxed, many find staying productive throughout the day easier. For this reason, the Sativa-leaning strain is definitely a morning treat.

White Buffalo has a musky scent with tangy undertones. Making up the rest of its fragrance profile are overtones of freshly picked herbs and spices blended with notes of wood. Broken apart, a faint sweetness permeates in the air.

White Buffalo floods the palette with a tantalizing sweetness coupled with refreshing hints of pine. The woodiness is not at all overwhelming, especially as the herbal tinge of spices wash over the mouth with an earthy aftertaste.

Like other strains, White Buffalo comes with the usual case of dehydration. It dries the eyes and interferes with the production of saliva so users end up with a cottonmouth as well. Neither are a cause for concern but those who find the dryness uncomfortable may down a few glasses of water.

Excessive use of White Buffalo may bring on increased anxiety levels and temporary dizziness. Some may even experience a slight headache due to the Sativa-leaning bud’s potent effects. Pacing and moderation, however, will keep such symptoms away.

Depression is one of the most pervasive mental health issues among people. In fact, a study conducted by the World Health Organization reveals that it is the fourth leading cause of disability worldwide. Suffice to say that many of those diagnosed with it are unable to live their lives normally.

While there is the option of seeing a therapist or a psychologist, a session is quite expensive. For this reason, some enthusiasts rely on of strains like White Buffalo. Their mood-stabilizing effects improve self-confidence and positively affects outlooks. At the same time, it reduces high levels of anxiety through its stress relieving properties.

Fatigue is also a common symptom among people with chronic stress of depression. In delivering its energizing buzz throughout the body, White Buffalo seemingly ‘wakes’ the body from its lethargy while soothing away aches and pains. The same bud reduces swelling and redness in inflamed areas as well.

Typical of Sativa-leaning strains, White Buffalo has a penchant for Mediterranean climates with intense sunlight, long summers, and almost equal hours between day and night. While it has no problem thriving in countries located near the equator or south of the world, it may have trouble adapting to weather changes in the northern hemisphere.

Not that the plant will die off, of course. On the contrary, White Buffalo is quite resilient and can withstand the low temperatures of the north. But, the short summers, lack of adequate sunlight, and long nights make it flower longer than usual. For this reason, many growers prefer cultivating their strain in controlled environments where they can easily mimic a semi-humid, Mediterranean climate by adjusting a few factors.

Indoors, White Buffalo’s height necessitates early topping and training. Otherwise, it can easily outgrow the confined space. This will also encourage better air and light circulation so budding sites found on lower-end branches stay healthy. With regard to medium, soil is the best option for enhancing flavors.

While greatly considered to be rare, there are a few dispensaries that sell White Buffalo. Although, buyer’s discretion is advised since seeds of the strain are generally known to pop up from time to time.

White Buffalo has an indoor flowering period of 7 to 9 weeks which is shorter than most Sativa dominant herbs. Its yields, however, live up to its lineage. Each square meter produces between 12 to 16 ounces of buds during harvest.

Garden grown White Buffalo blossoms between the last week of September to the second or third week of October. A vigorous producer, it yields more than 16 ounces of buds per plant.

Have you ever smoked or grown your own White Buffalo? Please let me know what you think about this marijuana strain in the comments below.