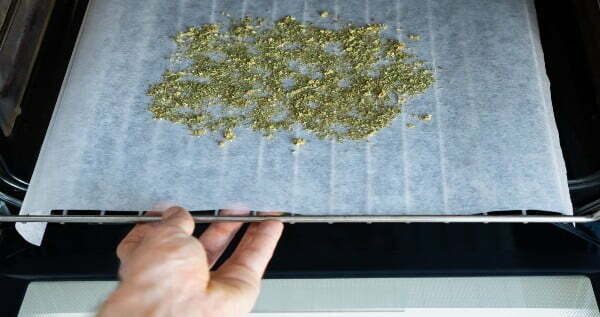 When opening a bag of freshly dried buds, it’s tempting to think eating it could be just as enjoyable.

There are certainly some curious minds that have tried – but were disappointed with the results.

Instead, you must decarb weed before you can really enjoy it.

The problem is, there are many methods for at-home decarboxylation. That’s why it can be hard to identify the best way to decarb weed.

This article will address how to decarb weed, but first, let’s discuss what decarbing is.

Weed gets its psychoactive effects from cannabinoids – particularly Tetrahydrocannabinol (THC), but there’s only a trace amount of it on the plant.

What you’ll actually find on the plant’s trichomes is Tetrahydrocannabinolic acid (THCA), a non-psychoactive compound.

It is the most abundant compound found in cannabis and the precursor to THC.

The process that converts THCA to THC is called decarboxylation. This chemical reaction removes the carboxyl group, allowing THC to interact with the body’s receptors.

You only need heat and time to decarb weed. This is why curing/drying weed is so important – it helps convert some of that THCA to THC.

But even then, it only converts a small amount – not enough to produce a substantial effect.

That’s why eating cannabis, whether fresh or dried, won’t produce a potent effect. To properly decarb weed, you need heat, either from smoking, vaporizing, or cooking.

Once you’ve decarbed your weed, pull out the THC in a tincture or oil.

Decarbing weed converts THCA to THC. Think of it as activating the psychoactive compounds that are dormant in the herb so that you can enjoy the recreational and intoxicating effects that it offers.

You do this when you smoke or vaporize weed. You’ll also decarb cannabis to make concentrates and extracts, as this is how you activate its psychoactive effects.

And there’s a couple of methods for doing this, and we’ll get to that later.

Marijuana edibles include cannabis concentrates and extracts. These extracts and concentrates come from decarbed weed.

So, if you want to make edibles, you must first decarb your weed. Whether you’re making weed brownies, gummies, or cookies, you should ‘activate the THC before adding it to other items such as syrup, butter, or oil.

Even if you’re more concerned about CBD, decarboxylation is necessary. The same is true when making cannabis topicals. These creams and lotions apply cannabinoids directly to the body.

Decarbing extracts the CBD and THC from your harvest, and if done correctly, it has many benefits.

Properly decarbed marijuana has greater potency, effectiveness, and preservation. The process of decarboxylation is rather simple; however, you must get the temperature right.

The best temp to decarb weed is around 225°F (105°C), although you can find success with slightly higher or lower temperatures.

Here are some of the most popular methods for decarbing weed at home:

How To Decarb Weed

Now that we’ve discussed the fundamentals of decarboxylation, here are a few methods for doing it.

Pick your favorite, then use your decarbed cannabis to make potent infused oils and concentrated tinctures.

Heat and time are the two major factors in weed decarboxylation, so naturally, the go-to kitchen appliance is an oven.

However, since oven temperatures may vary and should be considered the average rather than an exact temperature, there’s a small risk of burning your cannabis with this method if you don’t keep a relatively close eye on it.

Other than that minor drawback, the oven method is the easiest and requires the least time and tools. Speaking of tools, you’ll only need a baking tray and aluminum foil (or parchment paper).

The first step is setting your oven to 225°F (105°C). Place the oven rack in the middle position – this placement exposes your buds to the best temp to decarb weed.

Next, lay the aluminum foil on your baking tray. This adds a layer of protection for your cannabis and prevents scorching.

Leave your cannabis in the oven for 45 minutes. After that, remove it from the oven and let it cool for 30 minutes at room temperature.

You can also place your cannabis in a mason jar and put that in the oven. This helps prevent smell.

This method uses the same steps, except your cannabis is inside a mason jar instead of on a baking sheet. The best part?

Your decarboxylated cannabis is already in a container, which is perfect if you don’t plan to use it immediately.

Use your crockpot (if you have one) to decarb and make cannabis-infused oils. Like the oven method, i’s rather easy to do; however, it takes far longer.

You’ll need coconut or olive oil and dry cannabis plant matter. Simply mix everything in your crockpot, cover, and let it cook on high for an hour.

After the initial hour, turn your slow cooker to low and cook for 2-3 more hours. Once done, let the mixture cool before straining it through a cheesecloth.

If straining through cheesecloth sounds like a chore, you can also use a mason jar, just like the oven method. However, for this method, you won’t decarb in oil.

Instead, you’d only place coarsely ground cannabis into the jar. Then you’d place that jar into a crockpot with water.

The water will slowly decarb your cannabis while also remaining in a safe container for storage.

A heat-safe cooking pouch and some boiling water in a pot serve as a cheap alternative to the crockpot and mason jar trick.

And compared to using the oven method, you’d run less of the risk of burning your herb or stinking up the house since it’s in a boiling bag.

You can also use this method to decarb other things, such as keif and hashish. The only downside is how long it takes compared to the oven method.

Ninety minutes may not seem like much when compared to the process of making cannabis-infused oils, but it’s still a lot of time.

Thankfully, you can decarb in batches by using multiple boiling bags.

As for the temperature, as long is the water is boiling, it’s hot enough. Since the temperatures are lower, you’ll need to spend the most time with this method.

Be careful not to leave your cannabis in boiling water for too long. (We cover temperatures in detail in our decarb weed chart.)

To decarb weed using a vaporizer, simply ensure you use the right temperature, then save what’s leftover.

Infuse that leftover weed in oil or make a powerful tincture.  It may not be common, but it’s definitely a lot better than simply throwing it out.

There is one drawback to this method. There’s a limited amount of marijuana that anyone can vape at one time.

Unless you own a Volcano, it might take you a while to collect enough AVM to create edibles.

How should you decarb your weed? Well, that’s entirely up to you!

Decarb Weed in a Crockpot

If you plan to make an infused oil, the crockpot method conveniently combines two steps into one; however, it’s very easy to keep your leftovers if you already own a vaporizer.

In general, the oven method is the quickest and easiest method. Just be mindful of the smell that it may end up making!

If you’re ready to decarb weed, here’s a handy guide to get you started:

Keep in mind; you want to use the lowest temperatures to preserve as much of the cannabinoids as possible.

As seen in this decarb weed chart, the boiling bag method utilizes the lowest temperature 212°F, although it takes the longest time.

You can’t enjoy weed if you don’t have any. Visit our seedbank for your growing supplies.

Do you need to decarboxylate weed for butter?

Yes. When making weed edibles, you should ‘activate the THC before adding it to other items such as butter, syrup or oil. Decarboxylating marijuana buds activates its psychoactive effects. Learn how to make marijuana edibles here.

What’s the ideal temperature to use for heating weed?

Growing marijuana isn’t that complicated, especially if you know what you are doing. Our blog can help with that.

Got something to say? Comment below. Someone will read it. I swear.

Who’s got the lighter?

BACK TO TOP
Your Definitive Guide to Vape Pens
4 Fun (and EASY!) Halloweed Costumes
5 Ways To Stop Smelling So Dank

3 comments on “How to Decarb Weed”