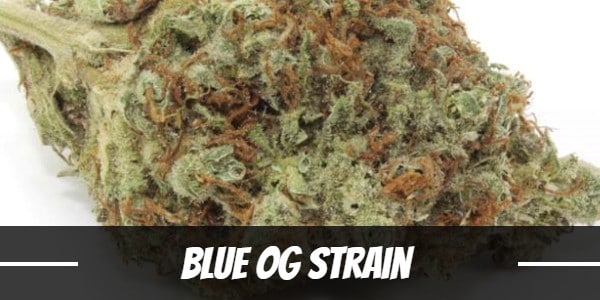 Blue OG is yet another strain created using, among others, OG Kush. Being cannabis users, we know how our mind can wander at times.

So, it is not hard to think of its flowers as being of the blue color. Of course, that is not the case. At any rate, what is important is the effects it delivers and how well it does so.

One thing we noticed about Blue OG is that while we have listed it as a 60% Indica strain, it could also be higher.

For instance, there are cases when its Indica side could take up to 80%. Still, the remaining Sativa side still delivers an amazing cerebral experience.

Most strains are a result of a two-way cross. In the case of Blue OG, it is a three-way cross between Blueberry F3, Blue Moonshine, and OG Kush. As can be noticed, it takes its name after its parent strains.

But more important than names, it is also inheriting the best traits of the parent strains and combining them into one.

Blue OG does come from a great genetic lineage. For it to justify its creation, it will have to offer something unique or better. To that end, it does and it does it very well.

For the ultimate relaxation, Blue OG is one of the best strains to use and here’s why. At its onset, the strain induces users to feel uplifted.

It does so in a gentle manner that most people do not even realize that the effects of the strain have kicked in. Soon enough, most users also feel happier with some feeling euphoric.

At the same time, it is as if a veil was lifted off the head. With a clearer mind and focus, the strain induces creative thoughts.

As far as Sativa effects go, Blue OG delivers the same experience as many other Sativa-dominant strains without the buzzing high that can be overwhelming.

As noted, Blue OG is an Indica-dominant strain. Like its smaller Sativa side, the physical high creeps in slowly and before users realize it, they are usually left feeling lazy on the couch.

Even as the mind starts cranking out thoughts, the body now is in a state of bliss.

Because of that, the strain is best for use at the end of the day when there is nothing else to do. It makes sense too, as most users do feel drowsy before its effects completely wear off.

It has to be one of the better smelling strains ever created. Blue OG has an earthy smell that is reminiscent of being in a field surrounded by pine trees on an early morning.

As one sniffs its scent, the strong hint of citrus and blueberry is very distinct which enhances its aroma.

Not only does the Blue OG strain smell great, it also tastes great too. It comes with a sweet citrusy smell with an interesting blend of pine and blueberry.

Completing its great flavor is the smoothness of the smoke during inhalation and exhalation.

For most people who have been using marijuana for some time already, they know very well that its use can result in dry mouth and eyes.

So, using Blue OG is not at all different from any other strain.

However, what is notable is that this strain can also cause some people to feel dizzy. Should this occur, it is most likely a result of using a little bit too much.

At the same time, there are rare instances when some people may feel a little more anxious or even have a mild headache.

To avoid or reduce the risk of negative reactions, use Blue OG in small amounts only.

Because it acts slow, that does not mean it is not potent. In fact, this strain has a higher than average potency levels.

Because Blue OG is a great strain for relaxation, then it also benefits those who need help in reducing their stress levels.

As such, the strain can also be used to control depression.

Some people note that in using this strain, they seem to feel a little energized.

In fact, that may be true at the onset of the Sativa effects. Even so, that is also soon negated by the powerful physical high.

Among the other popular use of the strain is in pain-relief. Even those who have muscle spasms will benefit from the use of Blue OG.

Blue OG thrives well in a semi-humid climate that is similar to that of the Mediterranean. Like many others, it can grow outdoor or indoor. One thing that growers need to do is to keep the plant short and let it grow bushier. In an indoor setting, make sure that adequate light is provided and that the reflective interior of a grow tent is bouncing enough light to the harder-to-reach areas.

While it is more of an Indica strain, it does grow more like a Sativa with regards to its flowering time. Even so, the difference is only one or two weeks. In the end, growers receive their reward for all the caring in the form of around 14 to 18 ounces of Blue OG per square meter.

Usually, Blue OG is ready for harvest at the end of September, with some plants needing a few more days towards October. The estimated yield per plant is around 18 ounces.

What is the Blue OG strain yield?

How much THC does Blue OG have?

What are the origins of the Blue OG strain?

Blue OG was created from a mix between Blueberry F3, Blue Moonshine and OG Kush.

Have you ever smoked or grown your own Blue OG? Please let me know what you think about this marijuana strain in the comments below.