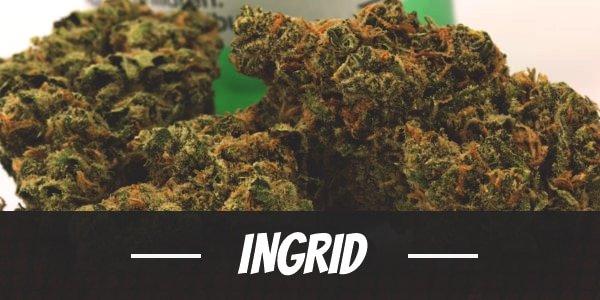 Beauty is in the eye of the beholder, so goes the saying. Physical looks matter when we were young but soon enough, we learn otherwise. Behind that pretty face, there has to be something more. How then is Ingrid different from the others?

Wearing neon green, the color of her flowers scream at us, calling us out. Looking at her, it is hard not to stare at her striking color. But hidden beneath the beauty of her buds, her soul threatens to lash out with fury. Ingrid, the cannabis strain, may not be as popular as many other strains. But when it comes to potency, she may as well be the devil reincarnated.

While looking into her past, we note that there is another strain that goes by the same name. It is different in that it is a cross between Querkle and Harlequin – both of which are not where our Ingrid came from.

The consensus is that Ingrid is an offspring of UK Cheese and Hash Plant. It is a 75% Indica strain, although, in some instances, it could be as high as 90%.

Amidst all the turmoil, it is always nice to have someone to come home to. Someone who could take away all the troubles. Instead of reliving the nightmarish day that was, the someone could offer calm and peace of mind. Ingrid does that and so much more and that is why people who chance upon her fall in love with her.

In some tests, she has been shown to have as high as 31% THC which makes her extremely potent. Unfortunately, she seems to make her mark in California. Outside of that state, she is pretty much unknown. But looking at her potency level, she belongs to the conversation on the most potent strain in the world.

She acts quickly too as, during the onset, users almost immediately feel their mood swing for the better. Feeling happier, there are also times when users also start to feel euphoric. Before the mental high further intensifies, her dominant Indica side takes over.

Delivering a powerful sedative-like effect, users start to feel completely relaxed. In most cases, a lot of people start to feel a little drowsy too. Due to her insanely high potency, it is best used by seasoned users. Beginners and novice may have to use other strains as this one can be overwhelming. But if relaxation is the main objective of using cannabis, then use this one in small amounts only.

More than her incredible ability to induce complete relaxation for the recreational cannabis users, Ingrid also has a lot to offer to the medical marijuana community.

Ingrid not only has a striking color, she also has a very pungent and skunky odor with a hint of cheese. Overall, it is not all that bad. Although it is not one that can be described as extremely pleasant, nonetheless, it is still a nice scent.

Her skunky smell carries over to her taste, as well as the hint of cheese. During inhalation and exhalation, a spicy taste can be detected, as well as a lingering taste of citrus.

It is a given that anyone using cannabis will experience dry mouth and dry eyes. As to how severe the symptoms are, that would depend on how hydrated users are. In other words, it is best to drink a lot of water before and during its use. At the same time, being hydrated also minimizes other negative reactions such as having a headache.

In some instances, it is possible to feel a little dizzy. Usually, this is a result of the sudden rush of its powerful effects. Also, there are a few people who may feel a little more paranoid. Again, using only a small amount should eliminate these concerns.

For medical cannabis users, Ingrid has the ability to reduce stress. Not only that, she could also give relief to those who are suffering from pains and aches. This is one benefit of marijuana that cannabis activists are using to lobby for its legalization in more states and countries. Ingrid, as well as many other strains, can offer comfort to people with illnesses, including those that are terminally ill.

Because it is able to help reduce stress, Ingrid can also be used by those who are suffering from depression. While it is not a treatment, it does uplift moods, which effectively makes it easier to manage such mental disorders.

Ingrid can be grown both outdoor and indoor. We do recommend growing her indoor as she tends to have a much higher yield than when grown outdoor. Indoor, of course, the best way to cultivate this plant is to use hydroponics. She does tend to be bushier rather than taller. As such, she seems to be perfect for the Sea of Green technique too.

This strain matures really quick. In as early as the fifth week, growers can expect around 12 to 16 ounces per square meter.

With a lot of tender loving care, Ingrid will grow outdoor. It will take longer, though. During the latter days of October when she is ready for harvest, it seems like each plant can have only around 12 ounces yield, which is lower than when grown indoor.

Have you ever smoked or grown your own Ingrid? Please let me know what you think about this marijuana strain in the comments below.