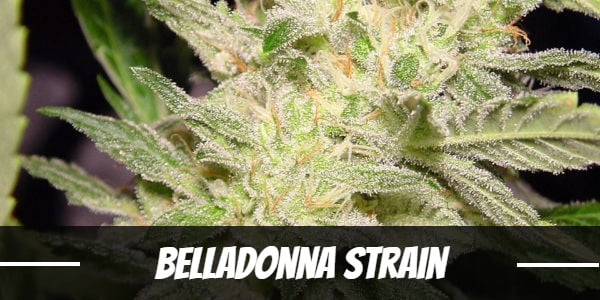 What does the featured strain on this article have anything to do with the deadly nightshade? For one, both are notorious plants. Another is that they share the same name – Belladonna. But that is where their similarities end. One is toxic, while the other brings life and laughter.

For decades, marijuana has had a bad rap. Of course, that is not to say that no one abuses its use. After having said that, there are now more people understanding that there are benefits. Just because it is cannabis, it does not mean it is entirely bad. And by following a negative line of thinking, then tomatoes and potatoes must be toxic for they belong to the same family as the deadly nightshade.

There are many breeders who, for decades, has bred several hybrids. Although some are open with the genetic lineage of their creations, there are others who opt not to. One of them who decides not to divulge all details is Paradise Seeds.

The company bred Belladonna back in 1999. It has been a long time already, and yet the only thing we know is only one of its parents – Super Skunk. As for its other parent, it remains an unknown Sativa.

Belladonna has an above average potency. Even so, it does not kick in quick. For that reason, some people who are new to using this strain may end up using a too much.

It takes a little while for its effects to creep in the beginning with a euphoric mental high. Used in small amounts, it is a great party strain in that it induces people to giggle and laugh. In other words, it turns the Mr. Grinches of the world into the Jolly Good Fellow.

The uplifting feeling sweeping in brings happiness, but it does not do so with a hazy buzz in the head. As such, most people should be able to finish their tasks.

But as mentioned, some people end up overindulging. In most cases, it is because they underestimated the strain, not realizing it acts slow. Once that happens, the less dominant Indica side will have a more pronounced effect. As it creeps down to the body, it causes the body to feel relaxed. But it also has a sedative-like property that can cause people to stay locked on their couch.

Feeling lethargic and lazy, it is soon followed by an intense drowsiness. In many instances, users may fall asleep without even realizing it.

Belladonna emits a pungent and unmistakable odor similar to its parent, Super Skunk. It also comes with a sweet fruity scent that is likely an influence of its other parent – the unknown Sativa.

The strain tastes like how it smells, but while the fruity scent is mild, it is a little bit more pronounced as users. Most people should detect berry blended with wood with a lingering aftertaste of spice and mint. Most people would also describe its smoke as smooth.

One thing this strain can do is to cause people who use a tad bit too much to feel paranoid. Although it is manageable, some may not like the feeling. Having said that, it is now up to individuals to make their choice of using Belladonna or seek another strain.

Besides paranoia, another thing it can do is to cause some people to feel a little dizzy. In this case, it is usually during the onset of its effects.

Also, a couple of common reactions can also be expected. Dry mouth and eyes are typical with using cannabis, and Belladonna is no exemption.

Of course, like all other strains, Belladonna also brings benefits to the table for the medical marijuana users.

Looking to buy seeds like Belladonna? Check out our marijuana seed bank.

Use it in moderation, and its uplifting mental effects can crush stress. As such, it is also useful in other mental health issues including depression. But if one were to have a problem with anxiety, keep in mind that it can cause an elevated level of anxiousness and paranoia.

Belladonna, with its sedative-like property, can also help people who are suffering from pains and aches caused by chronic illnesses. In some cases, medical users sought it for pain relief.

One of the things Sativa-dominant strains do is to provide a boost in energy. As such, it can also be useful in helping people deal with fatigue. But again, use it too much, and that benefit is negated.

Finally, Belladonna makes people feel sleepy. So, for those who need help in sleeping or getting a quality sleep, this is one possible strain to use for that purpose.

Although Belladonna is Sativa-dominant, it looks and grows more like an Indica. It is short and bushy with medium sized buds covered with orange hairs and shiny white trichomes.

It thrives well in both indoor and outdoor environments. Grown inside the house, they will do well using the Sea of Green technique.

Not only does it look more like an Indica plant, but it also needs only 8 to 9 weeks to reach the flowering stage. Belladonna, indoor, can produce a yield of 18 ounces per square meter.

For those growers who are fortunate to cultivate this plant outdoor, it starts to flower in mid-October. Once harvest time comes, each plant can produce up to 28 ounces.

What is the Belladonna strain yield?

How much THC does Belladonna have?

What are the origins of the Belladonna strain?

Belladonna was created from a mix between Super Skunk and Unknown Sativa.

Have you ever smoked or grown your own Belladonna? Please let me know what you think about this marijuana strain in the comments below.