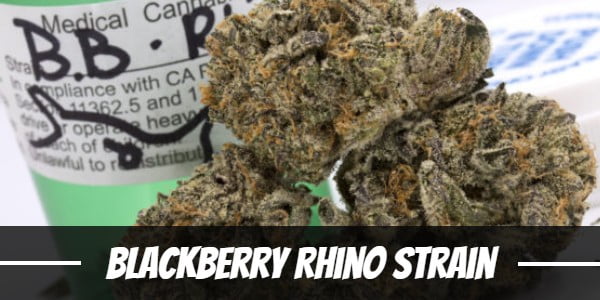 Blackberry Rhino is a hybrid strain that is mostly found on the Californian market, where it has become very popular over the years. This strain is useful both as a recreational strain, but also as a medicinal breed as it as many healing abilities that have allowed patients to relieve their conditions.

Blackberry Rhino, often also referred to as Blackberry White, is an slightly indica dominant hybrid strain that was created by combining the strains Blackberry and White Rhino. This bud is famed for its clear headed high mixed with very useful pain relieving and relaxing medical effects.

This plant is very special and instantly recognizable due to its strong berry accents and its sweet and flavorful taste. Blackberry Rhino has THC levels of up to around 13%, ensuring the user a manageable and enjoyable high that won’t feel overwhelming or induce dizziness.

Blackberry Rhino can only be described as excellent strain by its loyal fans, as this strain rarely disappoints when it comes to its effects. This bud is the perfect choice as an after work smoke as it will make you feel exceptionally relaxed from head to toe, buzzed and soothed both mentally and physically.

We don’t currently sell the Blackberry Rhino seeds. Check out other Hybrid seeds in our marijuana seed bank.

This flower can also cheer you up on those days when you are struggling to feel happy, as it is extremely uplifting in that aspect. Blackberry Rhino is extra popular among artists and creative types who are constantly on the search for a fresh source of inspiration, as this bud can motivate them to think more outside of the box when exploring their ideas.

Blackberry Rhino can make you feel quite hungry during your high and you won’t be able to resist the temptation of reaching for your favorite snack. This channel also make you feel quite sleepy and sluggish overtime, so it is best consumed on those days when there is nothing important on your to do list.

Blackberry Rhino Candy extra free rent is almost unforgettable based on its aroma alone. This strain smells like a potent blend of earthy pine that people seem sour in its notes. This but is also extremely skunky in nature and it’s smell will be difficult to disguise from others.

Blackberry Rhino has equally seductive and inviting flavors, and on the inhale you will notice this right away due to its berry and sweet taste. On the exhale, its smoke will taste herbal and pine with an added hint of spices that will taste woody as soon as you expel the smoke.

Blackberry Rhino contains a very reasonable amount of THC, keeping your adverse reaction at a minimum, although some have reportedly Felt a little paranoid at the end of this strain’s high. So these users also say that there might be a chance that you will end up feeling anxious when smoking this strain.

For the most part you were very likely to feel dry mouth, leading you to feel quite thirsty when smoking this bud. Blackberry Rhino may also make your eyes feel dry and irritable and in some cases, although he very rarely, you may also be prone two a mild headache, especially when feeling dehydrated.

Blackberry Rhino is a very useful medical strain that is widely recommended too many long-suffering patients as an attempt to combat their symptoms. This strain is the most used as a treatment method for chronic stress as it can help the patient feel more clearheaded and prepared for the air day without feeling frazzled.

We don’t currently sell the Blackberry Rhino seeds. Check out other Hybrid seeds in our marijuana seed bank.

This strain has also helped those who I Have been seeking out a more natural way of treating their chronic pain. Blackberry Rhino can successfully reduce back aches, inflammations, muscle spasms as well as chronic migraines and headaches, with less adverse reactions.

Blackberry Rhino can make you sleepy in a gradual way, which makes it a great alternative to prescription medication in the treatment of severe insomnia. Patients who struggle with depression may also find long-term relief when using this hybrid strain on regular basis.

Blackberry Rhino can be grown even by less experienced cultivators as it is easy to tend to. This strain is resistant to most common diseases and mill dues as well as molds, and is happy when kept in a warm and dry environment with lots of light.

Blackberry Rhino growing and doors can be expected to yield an estimated 17 ounces per square meter. This strain usually takes 8 to 9 weeks to finish flowering before harvest.

Blackberry Rhino grown outdoors can yield around 19 ounces per plan and should be ready for a harvest around the middle of October on average.

What is the Blackberry Rhino strain yield?

How much THC does Blackberry Rhino have?

What are the origins of the Blackberry Rhino strain?

Have you ever smoked or grown your own Blackberry Rhino? Please let me know what you think about this marijuana strain in the comments below.