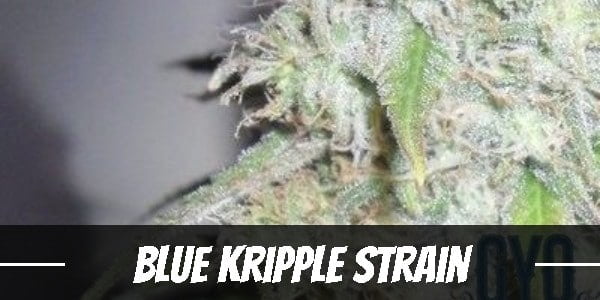 As its name implies, Blue Kripple does have the potential to cause debilitating effects. Of course, that is not such a bad thing at all. After a gentle cerebral high, it leaves users drifting off to dreamland.

At any rate, the choice of using Kripple is taken from Dr. Krippling, the breeder responsible for its existence. It is a three-way cross that features two medical marijuana strains and another to enhance the growth structure.

Serving as the genetic bases of Blue Kripple are Blue Rhino and Medicine Man. Both are highly touted for the therapeutic benefits. In particular, the latter also boasts of having a high CBD level. Apart from developing a medical marijuana hybrid, the breeder also infused the genes of Big Bud to increase the size and weight of the buds.

For recreational and medical users, Blue Kripple offers users a soothing full-body relaxation. As for home growers, it produces a massive yield that should last quite a bit of time before stock runs out.

It does not take long before the psychedelic effects of Blue Kripple invades the mind and, later, the body. At some 17% to 21% THC, it is by no means a weakling. Thus, even with a small Sativa structure, the euphoric head high is quite pronounced. During this early stage, the upbeat mood becomes conducive to smiles and laughter, especially when in the company of friends. For the most part, the mental stimulation leads to clarity and enhanced ability to focus.

Looking to buy seeds like Blue Kripple? Check out our marijuana seed bank.

At some point, a tingling sensation spreads down from the back of the neck. Along with it is a warm, uplifting buzz that soothes the muscles. As the physical effects of Blue Kripple envelop the body, it causes users to slow down as laziness set in and eventually leads to a couch-lock.

Although most people tend to have a craving for food, getting up to eat may prove to be an exercise in futility. It does depend on individual tolerance and the dosage as used in tiny amounts; it is possible to get up and go around.

Before the effects of Blue Kripple leaves the body, the chances are high that users have fallen asleep. For this reason, the best time to use it is in the evening.

Blue Kripple emits a pungent scent of skunk mixed with the sweet smell of blueberry. As such, users will want to ensure that it is no reason for concern as simply opening its container can quickly fill up the room with its aroma.

Blueberry and grape with a sweet note dominate the flavors of this hybrid. And, during exhale, it leaves a skunky aftertaste.

Staying hydrated when using marijuana is always an excellent idea. That is because it can cause dry mouth and eyes. Other possible adverse reactions are dizziness or headaches.

While feeling anxious or paranoid is often a result of using highly potent Sativa strains, Blue Kripple has the same potential. Whether it occurs or not is dependent on individual susceptibility and dosage.

As intended by the breeder, the best of Blue Kripple is for the alleviation of discomforts. For instance, its psychoactive compounds are natural painkillers. People suffering from numerous body aches including muscle spasms can indeed find a reprieve with its use.

Looking to buy seeds like Blue Kripple? Check out our marijuana seed bank.

Its uplifting qualities, on the other hand, can quickly enhance the mood. Consequently, Blue Kripple helps people melt away stress or deal with depression. To a certain degree, its CBD may also help those dealing with bipolar disorder.

Having a high amount of THC means that it can cause the munchies. For stimulating the appetite, users do have to be wary of the amount of usage or end up too lazy to move and eat some food.

Finally, the ability of the hybrid to bring users to dreamland is perhaps its best benefit. It is not only for casual users and insomniacs who need quality sleep but also for medical patients who need to rest.

Blue Kripple is not a tall plant and has a relatively quick flowering time. Growers can choose to plant it indoors or outdoors. Because of the pungent scent, most people do prefer to cultivate it using a grow tent inside the house. Doing so allows one to install an activated carbon filter to eliminate odor.

Apart from regular trimming and pruning, one thing that growers will want to do is to support its stems and branches. It is a voracious producer, and the Big Bud genes are evident with its weighty buds. On yield, it is, to say the least, utterly insane.

Growers can choose any medium, and the plant will thrive. Soil, for instance, is best if fragrance and flavors is a priority. For a faster growth rate, then it is hydroponics. Either way, combining it with the SOG setup helps it reach its full potential. After some 7 to 8 weeks of flowering, each square meter can yield 16 to 28 ounces of buds.

Blue Kripple thrives best in areas where there is plenty of sunshine. In the northern hemisphere, harvest time falls in October with each plant capable of producing 22 to 46 ounces.

What is the Blue Kripple strain yield?

How much THC does Blue Kripple have?

What are the origins of the Blue Kripple strain?

Blue Kripple was created from a mix between Blue Rhino, Big Bud, and Medicine Man.

Have you ever smoked or grown your own Blue Kripple? Please let me know what you think about this marijuana strain in the comments below.