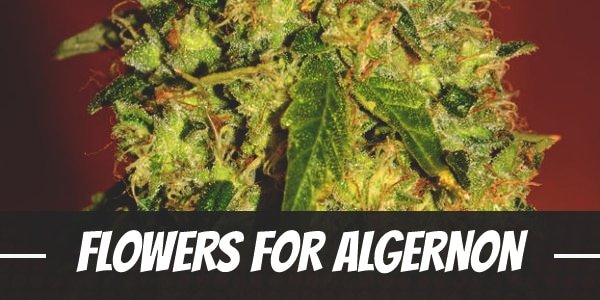 Flowers for Algernon is a critically acclaimed book for its insight on how people with mental disabilities are treated throughout their life. In the story, Algernon is a mouse who undergoes an intelligence-enhancing surgery but later dies. Charlie, its caretaker and who also happens to be the protagonist, offers flowers as he too experiences the same complications brought about by the medical procedure.

Information about Flowers for Algernon:

Suffice to say, the novel is real tearjerker. However, its namesake strain is the complete opposite. Its cerebral psychedelic high allows users to relive their best moments and create new ones. That, even as the high wanes, the feelings of happiness remain. Moreover, its medical effects do not deal with intelligence but rather emotional turmoil. If anything, their similarity is in providing patients temporary relief from certain mental and physical conditions.

While the chances of discovering the motive behind its name are slim, one thing is for sure. Pheno-Type Seeds created the strain using Sour Diesel. The Sativa-leaning hybrid handed down a lot of things to Flowers of Algermon. For one, it got its dense buds from it. Aside from that, it also inherited the stain’s signature tangy, diesel flavors. Mask, on the other hand, gave it its stimulating high and pine undertones.

At its best, Flowers of Algernon’s THC levels can reach up to 25%. However, with the help of a seasoned friend, users of various levels can enjoy the bud. Finding the elusive strain is another story though.

Information about Flowers for Algernon:

Being such a potent strain, a single puff of Flowers for Algernon lifts users to soaring heights in no time at all. This is not surprising. After all, the euphoric rush is quick to act. As it swarms the mind, it gets rid of negativity and rebuilds confidence. Moreover, it inspires a creative surge that facilitates a free-flow of thoughts and innovative ideas.

To the rest of the world, the innate happiness radiates. It brings back good old memories to tell as stories during social gatherings. But, more importantly, it attracts friends looking to connect. Although, sometimes, the party strain can cause users to be a little too chatty.

In time, the tingling sensations from the temples begin to ebb down to the body. While it also envelops users in relaxation, its effects are neither debilitating or crushing. Instead, they are totally reinvigorating.

To some, the natural aphrodisiac’s combined jolt of energy and mental stimulation is quite arousing. As such, the bud can be toked in anticipation of a loved one. Although, toking too much of the strain can ruin a great time ahead.

Flowers For Algernon’s scent resembles that of a car freshener. It has strong overtones of pine accented by sweet lemons. Broken apart or crushed, its pungent diesel scent permeates throughout the air.

Translating to its flavor is the overpowering taste of diesel. Blending with it is the sweet yet complementary citric taste of lemons mixed with strawberry. Its aftertaste, however, is largely reminiscent of refreshing pine and cooling mint.

With marijuana, the usual reactions are dryness in the eyes and the mouth. Both are barely noticeable. But, for beginners, the dehydration can be quite uncomfortable. In such cases, it is best to have a drink. Not alcohol or coffee, though. Most of the time, they do not react well with cannabinoids.

In excess, the clear-headed high can turn into an anxiety-inducing keen awareness. While this is largely dependent on individual tolerance, one’s emotional or mental state before the high is also a big factor. Pacing and moderation will keep users from experiencing such symptoms but, if the problem is innate, it is better to not smoke at all.

Presumably, Flowers for Algernon is widely used recreationally. However, its high THC levels are not without its benefits. Together with CBD and other cannabinoids, the herb retains enough therapeutic value to be of significance to the medical marijuana community.

Its cerebral effects, for example, relieve a variety of symptoms related to mental conditions like depression and PTSD. Its mood-enhancing capabilities fight against negativity and other self-destructive thoughts. In doing so, it slows down the fast-paced thoughts of anxious users and relieves stress altogether.

The same psychoactive compounds also alleviate aches, pains, and spasms beginning from the temples. Freed of the sharp sting of sudden contractions in the stomach, the soothing buzz stimulates and restores the appetite. As such, it allows patients with anorexia, cachexia, or cancer patients who have just undergone chemotherapy to fully regain their health.

Together, the cerebral and physical cradle the user to a deep, unencumbered slumber. Sleep, being a regenerative process, is a vital component in fully recovering from the problems a stress-filled and tension ridden body bring. For this reason, the bud’s sedating properties are a god-send to casual users and those suffering from insomnia.

Flowers for Algermon has a Sativa structure. It grows tall with rather thin branches and stalks. Outdoors, it cannot withstand sudden changes in temperature and is easily affected by diseases brought about by pests. For this reason, commercial breeders prefer growing the plant inside greenhouses.

This is not to say Flowers of Algernon do not fair well when cultivated in gardens. Rather, it requires the expertise of a seasoned grower. Under their care, the plants bloom exquisitely and abundantly. Each of their nugs are large, dense, and bursting with flavor. Their beautiful deep green colors are masked by a sparkling coat of sticky resin.

However, in controlled environments, growers can easily adjust important factors like lighting, temperature, and humidity to bring out the plant’s full potential. Indoor growing spaces also limit the chances of the batch being ravaged by pests. Although, cultivators will need to top the plant early and bend its branches to save space and encourage even higher yields.

Unfortunately, the seeds of Flowers for Algernon are not as widely available as the book its named after.

Flowers for Algernon has an indoor flowering period of 10 to 12 weeks with each square meter producing up to 16 ounces of buds. While the waiting time is long, seasoned growers can shorten it through methods like the Screen of Green.

Outdoors, Flowers for Algernon blossoms by the last week of October. However, without much sunlight, it can extend to the first week of November. Once mature, each plant yields more than 16 ounces of buds.

Have you ever smoked or grown your own Flowers for Algernon? Please let me know what you think about this marijuana strain in the comments below.

0 comments on “Flowers for Algernon Strain”