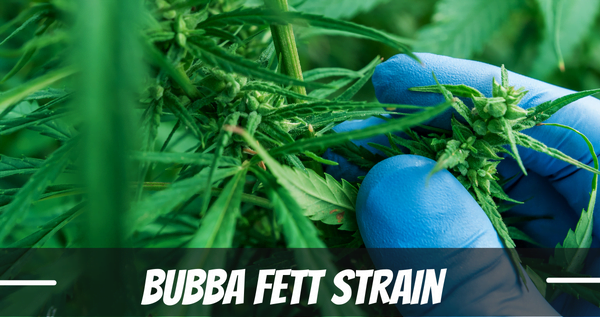 There’s no need to venture to galaxies far, far away to find strains that are out of this world, thanks to Colorado-based cultivator Green Dream Cannabis.

Their Bubba Fett strain is a heavily indica-dominant (70%-30%) hybrid with a potency of up to 29% THC.  It’s been racking up a body count ever since day one.

Bubba Fett weed strain (not to be confused with the Boba Fett strain) is a crossbreed of Pre-98 Bubba Kush and Stardawg that delivers an overwhelmingly relaxed high.

Along with its potent indica effects, this strain can contain a relatively high CBD content, making it a fan favorite for those turning to cannabis for therapeutic reasons.

Is the Bubba Fett strain indica or sativa?

If you have any doubts, the steamrolling effects of smoking this bud will quickly quell any speculation around the possible Bubba Fett strain sativa or indica dominance.

With a 70% indica to 30% sativa ratio, you should have a clear INDICAtion that you will have a calm, early night in.

This couch-locking strain stems from the legendary Hindu Kush and has a rich, earthy flavor with hints of coffee.

On the other side of the Bubba Fett strain family tree is Stardawg. It’s a heavily sativa dominant strain that delivers fast, hard-hitting head-highs that spur creativity and energy.

Stardawg (aka Star Dog) is one of the most potent strains from the Chemdawg #4 lineage after being bred with the Tres Dawg strain.

If you’ve happened to get yourself some Bubba Fett strain seeds, and you’re unsure about what to expect from your grow, then we’re happy to put your mind at ease.

Thankfully the Bubba Fett weed strain is easy to grow with a relatively short flowering time.

It produces short plants of around 30”, making it the ideal candidate for indoor growers who don’t have an abundance of space.

However, if your crop is cared for and cultivated in a moderately warm climate, you can expect a satisfying yield.

The beauty of growing the Bubba Fett strain is its pleasantly short flowering time.

To get the best results, utilize 12 hours of light every 24 hours throughout the vegetative stage (the first 42-56 days).

Change to an 18-hour per 24-hour light cycle when your plants enter the flowering phase.

A general consensus across many Bubba Fett strain reviews is that, although it may not be the largest yield-producing strain, it compensates by being powerful and flavorful.

It’s a super strain for indoor growers that want to grow enough for themselves, yielding on average 0.5-1.3oz per square foot.

The Bubba Fett strain info for outdoor growers is scarce; however, growers can yield up to 20 ounces per plant.

Getting your ass intergalactically kicked by a strain with a name that sounds like a hillbilly rapper is not how most would want to spend their evening, so take it easy when smoking the Bubba Fett strain.

Calm-minded and physically sedated are the states one would convey when describing the Bubba Fett strain effects.

Anxious thoughts and tense muscles fade as the waves of relaxing effects flow through your body, easing you into your evening.

The strain’s popularity is rising, especially for chronic pain, inflammation, spasms, and fatigue.

Couch lock, dry eyes, and thirst are normal when smoking this strain, so plan accordingly.

The nuggets of the Bubba Fett strain emit a dense pungency that’s impossible to explain away, so if you don’t intend to share (shame on you), keep that jar sealed tight.

Its aroma is thick and dank, with hints of tropical fruit and earthy elements that peek through a blanket of skunkiness.

Its flavor accentuates the tropical tones with subtle citrus and sweet berries, layered with woody spice and herbs, and the presence of diesel on the exhale.

How strong is the Bubba Fett strain?

The potency can vary from grower to grower. Some people have reported THC contents ranging from 15-29%. The average seems to be in the mid-twenties, so you can rest assured that you will get baked.

Are Bubba Fett and Boba Fett the same strain?

Yes, Bubba Fett weed strain is not only suitable for indoor growing, but it’s almost preferred. This short strain thrives within moderately warm temperatures, which are best maintained with indoor set-ups.