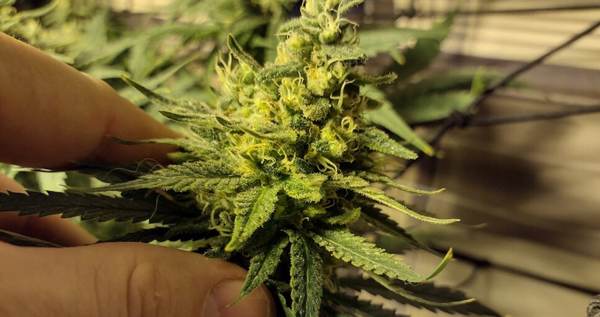 But, while PGRs do help produce big buds, it’s not the ideal way to get the yield you want from your cannabis plants.

Everything about PGR Plant growth regulators

PGR weed does have great visual appeal, but very few trichomes offset it.

Fewer trichomes mean this type of weed is not as flavorful, nor does it have the same kick as natural-grown cannabis.

There’s a lot more to unpack about PGRs. Questions like, ‘are PGRs in weed bad?’ and ‘is there a difference between weed with and without PGRs?’.

You can find all the answers to those questions and much more in this article.

What is PGR weed?

PGRs weed refers to cannabis that’s been grown with a type of plant growth regulator to boost bud appeal. It comes in various formulas, most of which are synthetic.

This is where most of the attention surrounding PGRs on weed comes from.

Some commonly used PGRs are carcinogenic, so it’s important to know how to spot PGRs cannabis.

This synthetic compound helps with flowering and plant growth. It strengthens the stems of plants while reducing branching.

It also shortens plant height, ensuring that all parts grow evenly. While there’s no evidence that chlormequat chloride is carcinogenic, it can cause skin and eye irritation on contact.

This chemical compound inhibits the growth of stems and leaves.

In return,  it maximizes bud growth in cannabis. However, Daminozide also reduces terpenes and cannabinoid production.

Important note: Daminozide (also called Alar) is classified as a potential carcinogen and should not be used.

The chemical Paclobutrazol inhibits the top growth of cannabis while encouraging root development.

This causes cannabis to grow larger and tighter buds. However, just like Daminozide, paclobutrazol reduces the ability of cannabis to produce THC.

And while paclobutrazol alone isn’t carcinogenic, smoking buds containing it is dangerous.

It causes the compound to break down into nitrosamines, a carcinogen also found in cigarettes.

PGRs are associated with several health problems. One of which is increasing the risk of cancer – since they are carcinogenic (i.g. Daminozide).

Long exposure to PGRs is also linked to other adverse health effects such as liver damage and infertility. There are also short-term effects of PGRs weed.

Headaches, dizziness, and nausea are just some of the immediate and short-term effects of smoking buds containing PGRs.

In particular, smoking buds containing paclobutrazol can cause breathing difficulties. Ingesting large amounts of chlormequat chloride can cause organ damage.

Why do growers use PGRs for weed?

With cannabis rapidly growing into a big business, it’s only natural that some growers will use PGRs in weed.

Not only does it encourage dense bud growth in cannabis, but it can also increase the yield of any strain.

And it does so without needing to apply laborious growing techniques. Instead, it uses chemical compounds to inhibit certain plant hormones, which affect growth.

In a way, PGRs are synthetic plant hormones that manipulate how your cannabis grows.

But, some growers don’t realize that using PGRs on their plants has an adverse effect on the buds it produces.

In the end, synthetic PGRs only increase the weight and density of the buds. It does nothing to improve the potency or flavor of your cannabis.

If anything, it hinders THC and terpene production in marijuana.

Where is PGR weed most often grown?

There’s no particular place where PGR weed can be grown, but it’s common to see it used indoors.

In short, using PGRs is an easy way to maximize the limited space you have for growing weed.

How to recognize buds grown with PGRs

The first telltale sign of buds with PGRs is discoloration. Naturally-grown cannabis buds have bright colors that pop when they’re fresh.

With PGR buds, it has a more brownish hue, with most of the bright colors diminished.

While checking for trichome density is a good way to spot PGR-boosted buds, it can sometimes be a red herring.

In some cases, the lack of trichomes could also mean that the buds were machine-trimmed.

This is why it’s important to check for all the characteristics before making judgments.

By far the best way to tell if weed was grown with PGRs is through its aroma.

PGR buds lack the pungent odor that you would expect from high-quality kush. Instead, you notice a chemical-like scent.

Lastly, the most telling sign of PGR-boosted buds is their enhanced structure. PGR weed produces buds that are tight and dense.

And those two characteristics are what people use as a point of reference when buying weed.

But, because of that, growers have learned to use PGRs to enhance the market appeal of their buds.

Thankfully, there is a natural way for your cannabis to grow appealing buds. The first is with chitosan.

This compound comes from chitin, which is found in the exoskeletons of insects and crustaceans.

You can use chitosan as a way to encourage vigorous plant growth. It does this by increasing the photosynthesis in plants.

Another type of plant growth stimulant is triacontanol. It’s found in beeswax and sugarcane. It increases the amount of chlorophyll in the leaves, which improves photosynthesis.

You can apply either of the two natural PGRs on your cannabis through foliar feeding or soil drench.

All in all, chitosan and triacontanol are two of the best natural PGRs for weed.

They achieve the same results as synthetic PGRs would, with the added benefit of being safe for human consumption.

If you aren’t buying your marijuana from a reputable source, you never know what you are getting.

Know exactly what you are consuming by growing it yourself. Buy easy-to-grow marijuana seeds at ILGM.com.

If you need tips on growing the best weed, don’t forget to download my free Marijuana Grow Bible

Is PGR Cannabis Safe to Consume?

In a lot of cases, no. PGRs weed can be carcinogenic. Even synthetic PGRs that aren’t considered carcinogens aren’t safe, as they can cause organ damage and other health problems.

Is PGR Weed Common in the U.S.?

Yes, it is. Unfortunately, due to the lack of regulations in the cannabis industry, PGR weed still exists in the black market.

Should You Avoid PGRs?

Absolutely. PGRs were banned from being used on food products. And while weed isn’t a food item, it is something that’s smoked. Smoking synthetic compounds like Daminozide can increase the risk of cancer. This is why it, as well as other synthetic PGRs, are only used on ornamental plants.