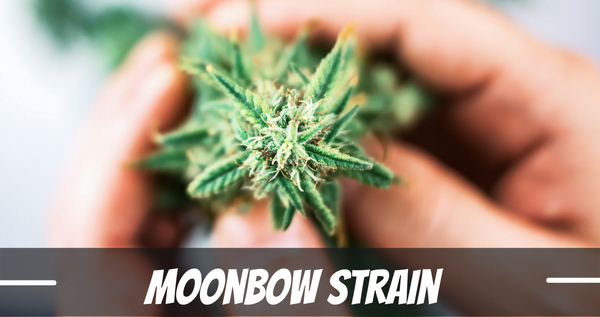 Moonbow strain is one of the more recent creations from Archive Seed Bank, limiting Moonbow weed strain info to a degree.

However, we know it combines Zkittles with Do-Si-Dos into a strain that delivers all the pleasantries we expect from professionally engineered hybrid strains.

It is also called Moonbow #112 since it is the 112th phenotype from the Moonbow family.

The Moonbow cannabis strain is a perfectly balanced hybrid, dispensing an even 50/50 mix of indica and sativa that evokes an uplifting yet calming and relaxed high.

A high point for many who come into contact with this strain is its fragrant aroma and mouth-watering flavors that will make you come back for more.

The information regarding Moonbow strain yields and flowering times are still up for debate, but if its parent strains are anything to go by, expect yields around 1.60 oz per square foot.

This would, of course, be nothing more than an assumed estimate.

Like most new strains, the Moonbow pot strain price will likely peak during initial popularity but eventually stabilize as more growers acquire a Moonbow seed or two of their own.

Moonbow CBD content may not be as high as some other strains; however, the THC content is high enough to take you to the moon.

Fortunately, it’s not so powerful that you’ll go intergalactic.

With a cool 18-20% THC average, the Moonbow marijuana strain is potent enough to give the more adept smokers a satisfying high while still being suitable for newbies to cut their teeth on something a little tougher.

The name should already indicate the type of effects Moonbow cannabis strain may provide.

This nighttime strain gives rise to a blissful full body high that caresses your muscles and your mind, easing tension and stress.

Moonbow effects are long-lasting, uplifting, and accompanied by a subtle vibrational hum that permeates your limbs, lulling you into a blissful state of relaxation, if not deep sleep.

One of the best things in life is to slow down and smell the roses, and Moonbow can help you do that.

The calming effects of Moonbow #112 strain have made it an admired choice for insomnia and anxiety.

It’s also useful for pain, nausea, and headaches brought on by chronic stress and fatigue.

On the “Subtle-to-Stank” scale, Moonbow strain scores a solid  “Daaayyymn,” with its intense sticky nuggets providing little to no discretion in the scent department.

If you intend to keep it low-key, good luck. The sheer dankness of this grape-scented candy strain is something to admire and will most certainly have your friends asking for a hit.

It’s a decadent combination of fruity sweet and sour aromas, earthy undertones, and some skunkiness for good measure.

Moonbow is sought after for its rich flavor. It is a buffet of tastes that deepen with every hit. Initially, a sweet berry with deep floral notes is the most prominent flavor.

It entices your palate and prepares you for the approaching buzz. On the exhale, the strong elements of citrus and spice are most noticeable.

If I had a full jar of Moonbow strain near me, I assure you, it wouldn’t be that way for long.

As with many mid-to-high level strains, expect a few unwanted reactions. They’re pretty much unavoidable but bearable.

That doesn’t mean you can’t do something about them.

Moonbow marijuana strain is likely to make you quite thirsty, so stock up on some refreshments to curb that cottonmouth and maybe grab some eye drops in case your eyes redden up.

You may also want to consider some snacks, as the monster munchies are a very real possibility.

As mentioned earlier, the information on growing Moonbow pot strain is still unconfirmed; however, looking at its genetic predecessors may indicate what potential Moonbow growers can expect.

As with many hybrids, especially those indica leaning, they prefer warm, sunny, and semi-humid climates with adequate ventilation to avoid any mildew issues.

Based on its parents, it may grow to medium height, producing bushy plants displaying average growing difficulty.

Generally, appropriate care and attention will bring out the best in your plants, regardless of what strain you intend to grow.

In the meantime, refer to our grow guide for the best tips on getting your crop thriving.

The average flowering time of the Zkittlez strain is around 8-9 weeks, with an outdoor harvest expected in early October; we assume that Moonbow #112 strain schedules are similar.

As more growers get their hands on Moonbow marijuana seeds, we’ll learn more – but only when we share..

So drop us a Moonbow marijuana strain review and let us know what your experience was growing this particular phenotype.

Both the predecessors of Moonbow strain genetics, Zkittlez strain and Do-Si-Dos, have established a rapport for divine flavor and cemented their place in cannabis legacy for their euphoric effects and all-around smokable appeal.

Do-Si-Dos is a potent hybrid strain stemming from the OG Kush family with intense creative-inducing effects and an unmistakable fragrance.

Combine that with Zkittlez, the fruity-flavored offspring of the Grape Ape family, and you are bound to have a potent concoction of flavor and potency that’ll have you coming back for more.

FAQs about the Moonbow

Is Moonbow indica or sativa?

Moonbow weed strain is a 50/50 balanced hybrid, meaning it’s half sativa and half indica. Its effects are also evenly balanced, having a robust indica body high while maintaining the upbeat mental buzz that sativa is known for.

Where can you buy the Moonbow strain?

Many dispensaries sell  Moonbow #112; it is most popular in  Oregon and California. Moonbow seeds are also available with some searching.