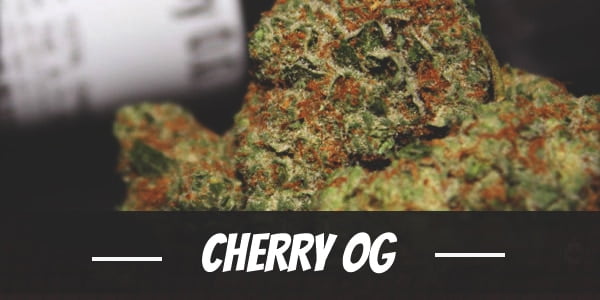 Cherry OG strain appeals to users with a strong sweet tooth. It is cherry-flavored with hints of ripe strawberries and a subtle tinge of sour diesel that entices the palate.

But, that is not at all. The potent strain contains THC levels between 19% to 22% and is a perfectly balanced hybrid with equal parts Sativa and Indica.

To create such an excellent hybrid, Emerald Triangle Seeds took Cherry Thai and crossed it with an Afghani to shorten the former’s flowering period and densify its airy buds.

It was later backcrossed multiple times to bring out the delicious fruitiness of the landrace Sativa. From there, Lost Coast OG got added to increase potency and add a sour kick.

Moreover, it contains at least 1% CBD – a chemical that works together with other cannabinoids to provide multiple therapeutic benefits.

With THC levels of 19% to 22%, Cherry OG is indeed a potent strain but it is also quite fast-acting. Almost immediately after the first two or three puffs, a cerebral buzz marked by a rush of euphoria. It brightens the mood but clears the mind as well.

For many, the mental clarity transforms another dreary day at work by allowing thoughts to form and flow freely.

Along with a heightened sense of focus, users stay motivated to complete tasks, fulfill projects, and stay up-to-date on reports. For convenience’s sake, it is best to prepare snacks ahead of time. This will keep people from getting up for some grub and breaking concentration.

Soon, the Indica genetics of Cherry OG are going to kick in. It ebbs down from the temples in the form of an uplifting buzz and surges through the muscles. Though it envelops users in full-bodied relaxation, it is not at all a hindrance to physical activity as it adds fluidity to one’s movement.

Most Cherry OG samples have a sweet smell reminiscent of cherries. However, some phenotypes carry a sour diesel-like fragrance. Enhancing it is a pleasant strawberry accompanied by a dank earthy aroma once the buds are crushed or combusted.

Cherry OG’s flavor is distinguished by sweet cherries and sour strawberries. When savored, a subtle note of herbal spiciness blends together with the initial fruitiness. On the exhale, the smooth smoke leaves an aftertaste of earth.

Adverse effects are unavoidable especially with psychoactive substances like marijuana. The most common reaction to its use is dehydration, usually reflected as dryness in the eyes and in the mouth due to cannabinoids inhibiting the production of moisture in both areas.

Some beginners may experience a little discomfort which can be easily addressed by drinking a few glasses of water.

Although seldom, excessive consumption can lead to temporary dizziness, increased anxiety, and paranoia. As such, it is best to consume the strain with restraint and not mix with alcohol and other intoxicants.

It is estimated that at least a third of U.S. enthusiasts mainly use marijuana to cope with stress. After all, if left unreleased, it can exacerbate health conditions or accelerate the onset of mental illnesses like depression.

Not only that, it can overwhelm users with dread and anxiety.

By inducing a calming yet happy high, Cherry OG perfectly counters the negative effects of being constantly bombarded by stress.

It eases the mind and stabilizes turbulent emotions while simultaneously raising low moods. In this way, it helps manage depression and other related issues like PTSD.

Like other strains, Cherry OG is capable of appeasing moderate to severe pain caused by sudden contractions of the muscles. It also reduces redness and swelling through the anti-inflammatory properties of its CBD, THC, and other cannabinoids.

Cherry OG inherited the sturdiness of its landrace parent, Afghani. It thrives best outdoors in a Mediterranean climate with lots of sun but, when exposed to colder temperatures, may take a week longer to finish. Still, it is sturdy enough to withstand various fluctuations in weather, high levels in moisture in the air, and strong gusts of wind. However, due to the unpredictability of the outdoors, many prefer to cultivate their batch in less volatile areas like greenhouses and other indoor growing spaces.

Controlled environments allow commercial growers a chance to adjust deciding factors like temperature, lighting, and humidity. Placing hygrometers around the room will help keep climates temperate. However, its height may require management techniques like early topping to keep it short. After all, it tends to grow beyond 6 feet once it hits the flowering stage.

Bending the strain and applying the Screen of Green method, as well as Low-Stress Training, will maximize yields and encourage lateral branching. One thing though, Cheery OG requires a steady supply of nitrogen, calcium, and magnesium during the vegetative stage for additional support. Moreover, it helps keep the plant looking healthy with its brilliant green hues.

Emerald Triangle Seeds currently sells Cherry OG in both regular and feminized form. The latter shortens the growing process and ensures users of an all-female batch of calyx-filled plants that ooze with resin. However, the former is for ‘genetic stability’ as the breeders believe in the vital role of male chromosomes.

Cherry OG is not a strain for the impatient as it usually takes between 9 to 10 weeks to fully flower. Once mature, it yields 12 to 14 ounces of buds per square meter.

In the northern hemisphere, Cherry OG flowers between the first and last week of October. It produces at least 14 ounces of buds per plant.

Have you ever smoked or grown your own Cherry OG? Please let me know what you think about this marijuana strain in the comments below.