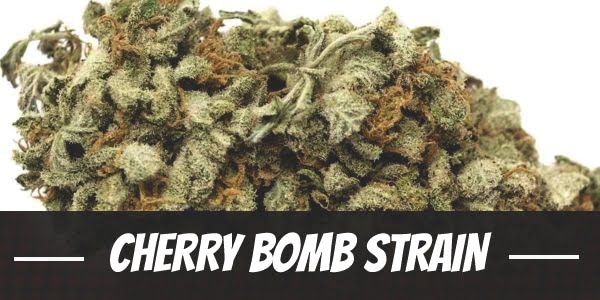 When breeders develop new strains, they often consider certain characteristics of the parents that they intend to breed and from there, choose the specific traits to highlight and reflect in the overall profile of the child strain.

Some prefer their creations to have distinct fruity flavors with varying potency. Others are known to produce some of the most medically valuable strains in the market while a few of them, on the other hand, focus particularly on improving a strain’s particular characteristic.

That being said, it is not surprising for users to come across a strain that has the best of both worlds. In fact, a lot of breeders would proudly emphasize the most notable traits of a child strain that have been inherited from its parents which, of course, is good for the image of both the breeder and the child strain.

Take this one particular cannabis variety named Cherry Bomb, for example. Although this strain’s origin is a bit vague, one thing is for sure. Cherry Bomb is a product of well-chosen parent strains that have been carefully and successfully bred to near perfection.

There happens to be no precise information as to the lineage of Cherry Bomb. What the cannabis community can agree on, however, is the fact that this hybrid strain’s parents are more likely to be a North American Indica and a Hawaiian Sativa.

One theory involves the Big Bomb and an unknown strain with a distinct fruity flavor. Considering the overall profile of Cherry Bomb, this theory is perhaps the most reasonable one.

First of all, Cherry Bomb is said to be an Indica-dominant strain. However, the exact ratio of its Sativa to Indica concentration is unclear. So, given that fact and the strain’s maximum THC level of 26%, users can quickly make conclusions as to its overall high. Surprisingly, the high is not entirely as overwhelming as its profile would suggest.

Cherry Bomb’s effects can be classified as mild to moderate. The onset is pretty quick and immediate though, but this cerebral effect is more of a functional high that a spacey high. It makes users feel happy and focused. The mental alertness it provides allows users to continue with their daily tasks.

Surprisingly, Cherry Bomb does not offer an overly powerful Indica effect despite the fact that it is mostly Indica. Instead, its physical high is more of a mild body relaxation that does not encourage the possibility of a couchlock which makes one think that perhaps Cherry Bomb has a perfectly balanced Sativa and Indica concentration.

All these facts make Cherry Bomb a perfect strain choice for daytime consumption as it gives the user enough motivation to get things done during the day and then rewards them with a calming relaxation later on.

If there is anything else more justifying about the quality of Cherry Bomb to support why it is named as such, it has to be its aroma. It does have this delightful fruity and cherry fragrance that are accented by musky and skunky notes which takes its overall aroma to the next level.

Naming a strain Cherry Bomb could bring out the expectation that the strain should taste as such. Indeed, Cherry Bomb offers an explosion of intense cherry flavor with a little woody and musky undertones that only make things even better.

Unfortunately, as deliciously potent as this strain is, it is nowhere near perfect. Cherry Bomb, just like every cannabis variety in the market, can still cause a few adverse reactions here and there.

For one, it is very likely to result in dry mouth. Other cases may even involve dry eyes and mild headaches. Also, a few incidents include users feeling dizzy and paranoid which, although relatively rare, are the things that users should be more careful about.

With a whopping 1.34% of maximum CBD level, Cherry Bomb is one of the favorites among medical marijuana users.

To wit, it is an effective mood and energy booster for people who are feeling too stressed-out and lethargic and just need a little extra encouragement to get through the day. It may even help those patients dealing with depression or other mood disorders.

There are many popular strains that are direct descendants of the Cherry Bomb. Read our full review on X-tra Chz Strain

Also, the calming and relaxing properties of Cherry Bomb can help in providing temporary relief to those patients suffering from chronic pain as well as in stimulating sleepiness for those having trouble sleeping.

There are varying opinions as to the level of difficulty when it comes to cultivating Cherry Bomb. However, what expert growers could agree on is the fact that Cherry Bomb is a high yielding strain with tons of flavors to brag about.

Apparently, it is very rare for high yielding strains to have such amount of flavors, so Cherry Bomb takes the list of being one of the few strains that can preserve its flavorful properties while producing several buds in a single harvest.

Furthermore, the strain may be grown indoor or outdoor. Indoor cultivation may be done using a SCROG or a hydroponic setup. Growers may even choose to grow the plant directly on the soil as this is said to be the best way of bringing out the strain’s cherry flavors. Outdoor cultivation, on the other hand, requires cooler temperatures for the plant to thrive.

Indoors, Cherry Bomb’s flowering stage should last about 8 to 10 weeks which will, later on, produce an impressive yield of up to 22 ounces per square meter.

Given the perfect growing conditions outside, the buds of Cherry Bomb should be ready for harvest by late September to early October. This time, the yield can reach as high as 26 ounces or more per plant.

Have you ever smoked or grown your own Cherry Bomb? Please let me know what you think about this marijuana strain in the comments below.