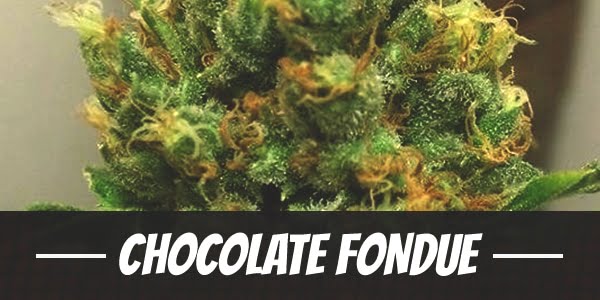 DNA Genetics is a company with a penchant for creating unique strains.

In fact, taking inspiration from the 1980s craze on chocolate-flavored strains, the breeders developed created Chocolope.

Its smoke boasts the richness of cocoa paired with a mentally-stimulating high that helps users de-stress.

While distinct on its own, the breeders crossed it with Exodus Cheese for its taste as well as its high yields.

Resulting from the unlikely pair is Chocolate Fondue, a Sativa-leaning hybrid with a buildable high despite its impressive potency.

Moreover, it is one of, if not the best, wake-and-bake strains in the market today.

Its cerebral buzz lasts long into the afternoon so casual users stay productive all day.

Despite its predominantly Sativa structure, Chocolate Fondue acts like a creeper. Not literally, of course.

Rather, it acts like an Indica in that it does not slam the mind and the body with its intense high.

While its pleasant initial onset is slow, the psychedelic effects following it last throughout the day.

Its euphoric rush, for instance, leaves users smiling and happy throughout the day.

Those with work ahead of them may even take advantage of the clearheaded high.

After all, it does keep people motivated with its ability to heighten one’s sense of focus.

And, with the uplifting and relaxing body buzz enveloping the user, completing tasks becomes even easier.

As alluded to earlier, Chocolate Fondue is a slow-starter.

Users, thinking it is as fast-acting as other Sativa-leaning strains, may make the mistake of consuming too much in such a short amount of time.

Pacing, however, will keep any unwanted reactions at bay.

Chocolate Fondue blends together the smell of cheese and hazelnut chocolate.

It is sweet but its undertones of wet soil become apparent once the bud is either crushed, broken apart, or combusted.

Chocolate Fondue truly lives up to its name. Drawing in its smoke is like biting into a bud dipped in chocolate infused with chestnuts.

Enhancing it is the subtle flavor of cheese. On the exhale, it leaves a lingering sweetness on the palate.

Generally speaking, Sativa-leaning strains increase anxiety levels in those already prone to it.

While this is rare, occurring mostly in users who overconsume the strain, it can also be the result of one’s low tolerance to the cerebral-focused stimulation.

For this reason, Chocolate Fondue must always be used with caution. Although, smoking the strain too fast can lead to temporary dizziness or slight headaches.

However, all marijuana strains come with an unavoidable side effect – dehydration. The dryness is most noticeable in areas like the mouth and the eyes.

Though mild, it can be quite uncomfortable for some users. In which case, rehydrating with water is the best choice to make.

Though admittedly created for the recreational community, medical users may still use the strain to relieve certain ailments.

For one, a Sativa-leaning hybrid like Chocolate Fondue appeases symptoms associated with depression and stress including mental or physical fatigue through its psychedelic high.

In clearing the mind, it also calms the fast-paced, self-defeating thoughts of person who is either ridden with anxiety or is suffering from PTSD.

Provided, of course, that the bud is used in relatively low doses.

Its immense therapeutic value does not stop there. After all, high levels of THC turn the psychoactive compound into a painkiller.

Its effects are most notable in the gastrointestinal tract, where it not only soothes the stomach but also stimulates it.

In doing so, it restores the appetite and is of great help to users with anorexia who are taking the steps to becoming healthy again.

At the same time, its anti-emetic properties keep users undergoing chemotherapy from vomiting or feeling nauseous.

Though the Sativa-leaning herb grows tall, its stalks and branches are neither thin nor weak.

Moreover, it addresses the common mistake that most beginners make which is accidentally killing plants in just half a day through overfeeding.

Apart from that, breeders should also keep temperatures below 26°C as it may cause terpenes to evaporate thereby reducing the overall taste of its chocolate-flavored smoke.

In the outdoors, maintaining a clean garden will keep pests at bay.

However, growers may have to double check for its availability in both online or offline dispensaries as its popularity makes it a best seller.

After 8 to 9 weeks, it produces between 17 to 21 ounces of buds per square meter.

Chocolate Fondue yields at least 21 ounces of buds per plant under the sun.

In a properly maintained garden without threat of extreme weather or other unpredictable factors, it blossoms between the first and third week of October.

Have you ever smoked or grown your own Chocolate Fondue?