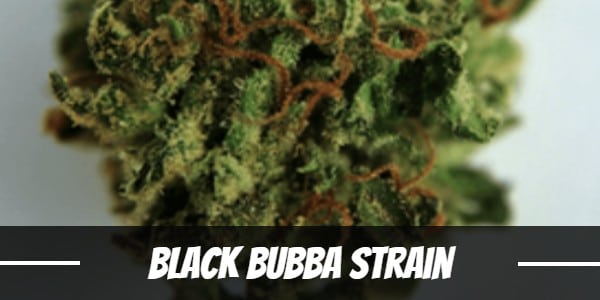 Black Bubba is the celebrity child of Bubba Kush and Black Russian. It is an Indica-dominant herb with eye-catching looks of stark purples and a truly exotic flavor. But, what truly makes it special is its highly potent THC levels of 17% to 24% that result in a couch-lock regardless of individual tolerance.

Of course, all these would not have been possible if not for the influence of its esteemed parents. From Bubba Kush, it gained its body-crushing psychedelic buzz that makes users feel as though they had been calmed down using a tranquilizer. Meanwhile, Black Russian enhanced the already intense high and deepened the former’s lavender hues.

Though its known use is largely recreational, Black Bubba remains a go-to strain for many medical marijuana users. Its large amounts of THC effectively address issues related to pain and spasms without sacrificing its stress-relieving qualities.

True to its Indica nature, Black Bubba’s onset is gradual. In most cases, users will only begin to feel the strain’s effects once it deeply relaxes the body.

Those who do notice the subtle uplifting buzz though know that the hybrid first leaves users feeling happy and contented. It becomes much more apparent later on when users begin to feel hungry. The mental stimulation, after all, has a somewhat similar effect on the appetite too. Preparing snacks ahead of time will keep users from dizzying themselves by moving around too much.

Gradually, the distinct tingling buzz of its Indica traits begins to creep in. It ebbs down in waves. Gentle at first but soon developing into an intense body crushing high. In all likelihood, users will end up glued to one spot despite not exceeding one’s limits. Melting into their couches, many are eventually whisked away to dreamland. For this reason, Black Bubba is ideally used at night or on guaranteed lazy days.

Black Bubba is harsh but far from unpleasant. After all, it does startle the senses with the pungent scent of blue cheese. However, its undertones of wet soil and mild pine entice users to try it anyway. Broken apart or combusted, the aroma of coffee fills the room.

Similar to its scent, Black Bubba boasts the flavor of blue cheese. Only this time, the taste is overpowered by strong notes of coffee and earth. On the exhale, it leaves a slightly tangy aftertaste.

Dehydration is usually linked to marijuana for good reason. Its cannabinoids strip away moisture in both the tear ducts and the salivary glands. Most likely, users end up with red eyes and a cottonmouth. These reactions are often unavoidable but easily remediable by downing a glass or two of water. Although, users may want to brace themselves for a temporary dizziness.

Despite it being an Indica, Black Bubba can sometimes cause users to feel slightly paranoid. While this is a rare occurrence, large doses increase the likelihood of it happening. As such, marijuana must always be toked in moderation.

Being a pure Indica, Black Bubba’s medical benefits center on the body. Its structure, as well as its chemical components like THC, appease a wide array of physical conditions.

Looking to buy seeds like Black Bubba? Check out our marijuana seed bank.

For one, it is a great painkiller. It totally relieves various aches caused by sudden contraction of the muscles such as cramps. Meanwhile, its anti-psychotic and anti-spasmodic properties make it an effective reprieve against seizures. But, before self-medicating, users should seek the approval of a medical health professional. Otherwise, it may exacerbate the problem.

Black Bubba is also great at relieving stress through its happy yet sedating high. Freed of physical pain and temporarily relieved of mental health issues, many users eventually fall deep into an unencumbered slumber.

Black Bubba is not a tall plant. In fact, it has no problem being placed in indoor spaces less than 3 feet in height. Provided, of course, it is assured with adequate lighting and great air ventilation. This makes it a great choice for both home and garden growing since the Indica-leaning hybrid is quite sturdy too.

While it does save space, the herb tends to grow wide and bushy. As such, aspiring growers may want to bend, trim, and prune their plant. The former will keep the plant short while the last two will ensure nutrients are delivered to healthier budding sites and leaves. Giving each plant adequate space around will also help.

Most Black Bubba plants produce forest green buds. However, exposing it to colder temperatures once it hits the flowering stage will trigger its exotic colors. Against a backdrop of deep purple and ocean blue hues, the silvery dust of trichomes looks like stars shining brightly in the night sky.

Black Bubba finishes flowering within 7 to 9 weeks. Under the expert care of a seasoned user, it yields an average of 8 to 12 ounces per square meter.

Garden-grown Black Bubba typically flowers anywhere between the first to the third week of October with each plant producing 12 ounces of trichome-coated goodness.

What is the Black Bubba strain yield?

How much THC does Black Bubba have?

What are the origins of the Black Bubba strain?

Black Bubba was created from a mix between Bubba Kush and Black Russian.

Have you ever smoked or grown your own Black Bubba? Please let me know what you think about this marijuana strain in the comments below.