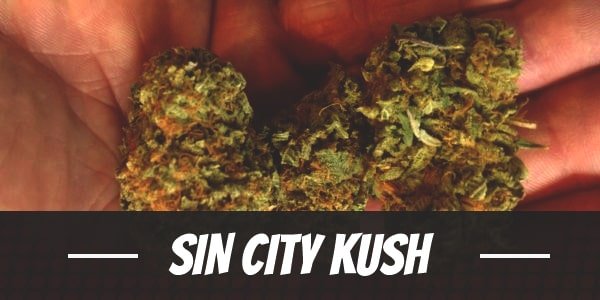 Sin City Kush is a strain that truly lives up to the Las Vegas standard. Its potent levels of THC delivers a powerful buzz that can lead to lethargy if used without caution. Moreover, the Indica leaning buzz tastes of decadent fruit and sweet flowers.

In creating such an excellent strain, Alphakronik Genes used the famous Las Vegas Purple Kush as a genetic base for its soothing lilac scent. To enhance its yields, the breeder crossed the strain with a backcross of Snowdawg.

The Indica leaning hybrid itself is not lackluster. True to its heritage, it relaxes users to the point of sedation. However, the 20% Sativa genetics of this strain gives it a slightly uplifting head high While it is known for its recreational use, the strain is not without its medical value.

Sin City Kush is a creeper that packs a potent punch of 20% THC. Its initial onset is slow yet, once the psychedelic buzz begins, it surprises users with its euphoric rush. The behavioral change is almost immediate. Users find themselves feeling happy from within. Some even laugh for the littlest reasons.

In time, an uplifting buzz trickles down from the temples in the rhythmic fashion of waves. It soothes any tightness in the muscles and plants a heaviness in the limbs. In excess, it anchors users to their couches and even incapacitate movement. Used within the limit of one’s tolerance, however, it envelops the body in relaxation.

Freed of tension, many eventually fall into a deep, unencumbered slumber. For this reason, the bud must be used at night. Otherwise, it can hamper productivity during the day.

Sin City Kush smells phenomenal. It has the floral sweetness of lilac like its Las Vegas Purple Kush parent with undertones of hazelnuts and a subtle hint of berries. Broken apart or combusted, a woody pine blends together with a pungent spiciness to fill the room.

Equally enticing is Sin City Kush’s taste. As soon as its smoke enters the mouth, a cocktail of sweet berries and grapes wash over the palate. Enhancing it is the delicious taste of crushed nuts. On the exhale, it leaves a pleasant floral aftertaste.

Most users of marijuana often experience symptoms of dehydration such as red eyes. A cottonmouth is likely as well since cannabinoids also interfeere with the production of saliva. Thankfully, both are mild and barely noticeable. If they do become a cause for concern, rehydrating with a few glasses of water is the way to go.

The hard-hitting effects of Sin City Kush often result in temporary dizziness or a headache. However, once users begin to green out, it can lead to paranoia. This is rare, of course, and is often the result of using too much in a short amount of time. As such, the bud must always be used in moderation.

Alphakronik Genes is a leading pioneer in the field of medical marijuana. Hence, it comes as no surprise that Sin City Kush offers vast therapeutic applications. For one, its cerebral high stabilizes and enhances the turbulent emotions of a person with chronic levels of stress. It can also temporarily appease mental illnesses such as depression and anxiety.

Sin City Kush’s best use, however, is providing a reprieve against bodily aches. Beginning from the temples, it soothes away various aches such pressure from behind the eyes. If left unchecked, intraocular pressure can accelerate the onset of glaucoma and lead to blindness. Meanwhile, the Indica-leaning bud’s antispasmodic properties alleviate painful contraction in the muscles. Users eventually fall asleep once deep in relaxation.

Sin City Kush grows short and sturdy. It fits most growing spaces and can withstand various problems caused by humidity such as mold and mildew. And while it prefers cold temperatures, it has no problem acclimating to warm weather. However, it does tend to get bushy and may constant pruning or trimming. Otherwise, branches on the lower end may does off from lack of sunlight.

There is no evidence to suggest that Sin City Kush does not grow well outdoors. Far from it, the plant thrives in a well-aerated, natural environment. However, most commercial growers prefer cultivating their strain indoors where important factors such as lighting, temperature, and humidity can easily be adjusted.

Dinafem Seeds released feminized versions of Sin City Kush’s seeds. Not only does it assure aspiring growers of calyx-filled females, it shortens the growing process as well.

Unlike most Indicas, Sin City Kush has a long flowering period that takes up to 11 weeks. Once mature, it rewards patient growers with 10 to 12 ounces of buds per square meter.

In the northern hemisphere, Sin City Kush blossoms between the second to the fourth week of October. Once ready for harvest, it yields more than 12 ounces of buds per plant.

Have you ever smoked or grown your own Sin City Kush? Please let me know what you think about this marijuana strain in the comments below.