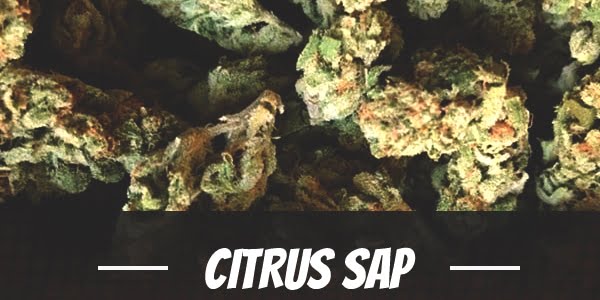 Citrus Sap is an appropriate name for this sativa dominant hybrid, which is made up of little dense buds with a deep orange hue. There is a slight sheen to each nugget as a thick coat of trichomes that look like sap. A batch of the plants in a single room will immediately tantalize the senses with a rich scent reminiscent of citrus.

Smoking the bud and taking a swig activates its euphoric buzz. It enlivens the mind, stimulating a long-lasting cerebral buzz that uplifts the mood. Meanwhile, a light pressure soothes the body while enhancing motivation. The result is a wake-and-bake effect that allows one to move around freely to complete tasks or pursue passion projects. However, at 18% to 24%, users must be wary of using the potent strain.

The DNA Genetics x Crockett Family Farms product uses Tangie as a genetic base for its sweet orange terpene profile. It delivers a euphoric high paired with a deep relaxation. Intensifying this effect is Gorilla Glue # 4 along with a sturdier structure that allows one to grow it in various environments.

Citrus sap is best used in the morning in place of coffee. Like orange juice, it enlivens the senses with its tangy scent and invigorates users from head to toe. Its onset is surprisingly quick, an ode to its Sativa leaning genes. Within minutes after the first two or three puffs, it delivers a rush of euphoria that instantly uplifts the mood.

It clears the mind, stimulating it in effect. Thoughts flow into the newly freed space and replace negativity with an influx of ideas. In all likelihood, users will experience a rise in creativity levels as one looks at the world with fresher perspectives.

After about an hour or two, a tingling buzz trickles down from the temples to relax the body. It releases tension that tightens or constricts the muscles. In doing so, it brings back one’s initial limberness so one can move around without restrictions. Along with the heightened motivation, it encourages users to move pursue light physical activities needed for tasks.

Citrus Sap, as its name suggests, smells strongly of squeezed citrus concentrate. It is complemented by a subtle undertone of wood which intensifies once the buds are broken apart. Combusting it, on the other hand, releases its sweet overtones.

Citrus Sap tastes just like ripe mandarin oranges. It is sweet but with the tangy taste of citrus. Enhancing it is the taste of wood that leaves an interesting blend in the mouth on the exhale.

All strains contain moisture-inhibiting cannabinoids that interfere with salvia production. Thus, a cottonmouth is something to be expected when smoking Citrus Sap. Along with it is redness in the eyes as it continues to dry. The unavoidable dry spell is mild and temporary but, if symptoms persist, then downing a few glasses of water throughout the day will ease the discomfort.

A more uncommon side effect of using Citrus Sap is greening out. In sharpening the senses, it can also trigger anxiety and paranoia especially as the mind becomes keenly aware of one’s surroundings. It is usually limited to a disorienting dizziness though. Still, users should pace consumption of the bud and practice caution.

Chronic stress is among the top problems that people all over the world face. It can be caused by various reasons with the most common being a never-ending workload. Thus, it is important for one to consistently release the accumulated stress.

To this end, Citrus Sap works perfectly. It induces an uplifting high that improves moods by raising the production of happy hormones. In reducing high-stress or cortisol production, the strain also stabilizes turbulent emotions that often plague long-sufferers of anxiety and PTSD. Similarly, its soothing euphoria provides a reprieve against depression.

Its high levels of THC, along with a CBD of up to 1%, relieve various types of aches and pains. It relaxes the body thoroughly including cramps and hunger pangs in the gastrointestinal tract. Because of this, it is a great source of comfort for cancer patients dealing with the nauseating effects of chemotherapy. As the light pressure surges through the muscles, its anti-inflammatory properties reduce redness and swelling.

Citrus Sap may be a Sativa-leaning strain but its Indica lineage is well represented. The plant itself is relatively tall. And, in spite of the stretch, its stalks remain sturdy along with its branches. Hence, it can be cultivated in the northern hemisphere with a certain degree of ease.

Its flowers quite early due to its adaptability to the col. However, as a tropical strain, it still prefers long hours under the sun. Growers may need to extend the flowering period for a few more weeks to increase yields. Temporarily enclosing the plant will also help circulate warmth and protect it against a possible snow during an early winter.

Growers can also opt to cultivate the plant indoors where it is easier to control the environment. Lighting, for example, can be increased by changing the lighting fixture to HPS systems. Meanwhile, temperatures and humidity are easily monitored and adjusted through installation of fans or a ventilation system.

Both the Sea and Screen of Green method work well with the versatile Citrus Sap. One can either plant more in a single square meter or install a net for better light distribution. Either way, both will increase turnout.

After flowering for 8 to 10 weeks, growers can expect at least 14 to 18 ounces of buds per square meter. It is possible to increase yields through plant training and manipulation.

Yields are higher outdoors for Citrus Sap. Each plant produces at least 18 ounces of buds at harvest, which usually falls around the second to the last week of October.

What is the Citrus Sap strain yield?

Citrus Sap yields 14 to 18 ounces per square meter indoors and 18 ounces or more per plant outdoors.

How much THC does Citrus Sap have?

What are the origins of the Citrus Sap strain?

Citrus Sap was created from a mix between Tangie and Gorilla Glue #4.

Have you ever smoked or grown your own Citrus Sap? Please let me know what you think about this marijuana strain in the comments below.