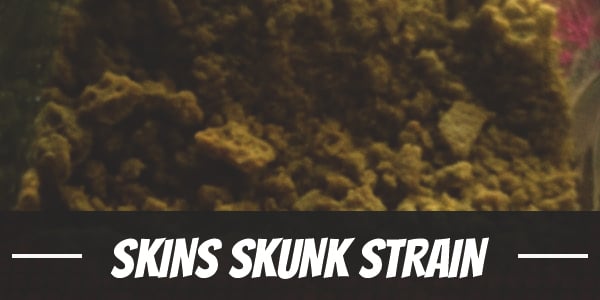 Loud Seeds are long-time cannabis breeders that have developed a range of impressive strains. One of which is Skins Skunk which is an Indica-leaning bud that produces a blend of head to toe effects. It is highly versatile as a result. Users may use it both recreationally and medicinally.

The strain very much resembles its predominantly Indica parent Afgooey which induces a soothing physical buzz but has a stimulating head high similar to a Sativa. Meanwhile, Michigan Skunk provided it with a sturdy and high-yielding growth profile.

Skins Skunk is a potent straight that should not be used lightly. It has a 17% to 21% THC that can overwhelm the mind and induce a couch lock. In moderation, however, its effects are pleasantly euphoric.

Skins Skunk has a head-to-toe high that both invigorates the mind and soothes the body. Its onset, compared to other Indica-leaning strains, is relatively quicker. Within minutes, users exhibit a positive change in behavior. Smiles are broader as a soothing rush of euphoria clears away the mind. It leaves users feeling happy as it continues to persist. A few laughs and giggles even escape the mouth.

After about an hour or two, a buzzing sensation surges through the muscles. Creeping in at first, it later intensifies into a blanket of relaxation that makes the body limber. Like well-oiled machines, users are free to move around and perform or pursue light physical activities.

Overall, the bud is best used early or late afternoon. It makes for a great strain to share among friends especially before a meal. With its subtle stimulating buzz, it entices interesting conversations and a hearty appetite. Although, if one prefers, it can also be used alone.

Skins Skunk has a fruity terpene profile with a sweet undertone that tantalizes the nasal senses. It has a distinct tanginess that reminds one of squeezed lemons, citrus, and strawberries. Breaking it apart and combusting the buds releases its hash overtones.

Enticing the palate is Skins Skunk’s tangy flavors of lemon, citrus, and strawberry. Complementing the fruitiness is the taste of hash. On the exhale, it leaves a with a sweet subtle aftertaste.

Dry eyes and a cottonmouth are a common experience among enthusiasts of marijuana. Strains, including Skins Skunk, has cannabinoids that interfere with moisture production. It is mild and temporary but easily manageable by downing a few glasses of water. Headaches are also possible but can be avoided by consuming the bud in moderation.

At up to 2%, Skins Skunk’s CBD levels are higher compared to other recreational strains. It has significant therapeutic effects that offer a reprieve against mental and physical afflictions. As an Indica-leaning strain, its best use is delivering a soothing physical buzz that manages pains and aches beginning from the temples.

The same head-to-toe high delivers a calming euphoria that not only uplifts the mood but also stabilizes turbulent emotions. It removes the overwhelming dread or anxiety that is triggered by either overwork or high stress levels. At the same time, it temporarily eases symptoms of mental health issues like depression and PTSD. However, for long term relief, seeing a licensed medical professional is a better option.

It relaxes the muscles thoroughly to prevent it from constricting or suddenly contracting. Thus, it makes for a great antispasmodic alternative that appeases cramps and spasms. Its heavy-hitting high has a sedating effect on users as it continues to persist. Similarly, it enhances the quality and quantity of sleep so one wakes up the next day feeling invigorated.

Skins Skunk has the typical structure of an Indica. It is short, sturdy, and quick-flowering. Because of its thick stalks and branches, it has a higher chance of surviving the cool weather of the northern hemisphere. Because of this, it is great strain to grow outdoors in either gardens or farms.

It will need a temporary enclosing during early winters. Otherwise, the plant will die overnight due to the frost. It will also provide protection against heavy rains which might break its branches in half. Strong winds, on the other hand, strengthen its branches and stalks.

Indoors, it will need to be pruned or thinned out. Its foliage is dense and often holds on to moisture in between its crevices. If left out, it develops into mold or mildew and result in bud or root rot. Installing a ventilation system will also help reduce humidity levels while fans keep the room cool.

It is well-suited to the Sea of Green method which requires cultivating at least four seeds in a single square meter for higher yields. Growers may pair it with a hydroponics setup that will deliver nutrients straight to the roots. As a result, growth is comparatively faster and the turnout is impressive. However, it can be quite expensive and delicate for beginners. In such cases, it is better to opt for soil since it is cheaper and easier to use. Aspiring growers also have more leeway when it comes to mistakes. Not to mention, it creates flavorful buds.

Skins Skunk has an indoor flowering period of 7 to 9 weeks. At harvest, it produces between 14 to 18 ounces of buds per square meter.

Skins Skunk produces at least 18 ounces of buds per plant once it is fully mature. Harvest period lies around the last week of September to the middle of October. Growers can extend the flowering time by a week to further increase yields.

Have you ever smoked or grown your own Skins Skunk? Please let me know what you think about this marijuana strain in the comments below.