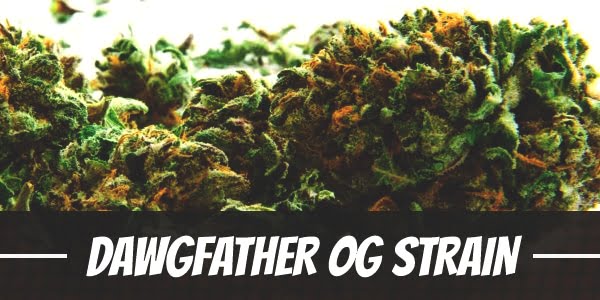 Chemdawg meets Sin City Kush to create the godfather of many ‘dawg hybrids to come – Dawgfather OG. This Sativa-leaning strain is potent, boasting THC levels beyond the 20% level.

It could easily overwhelm users with a soaring buzz that slams the head within minutes after the first few puffs.

Consequently, it also does not lock users to the couch completely stunned.

It has a gentle introduction that slowly improves the mood as it clears the mind which prepares users for the upcoming body high.

Its Indica effects shine through during this part. A tingling sensation settles into the limbs that eventually envelops users in relaxation. Its comedown is a drowsiness that leaves users feeling happy.

More than just a source of recreation, however, Dawgfather OG is a strain that provides reprieve against many health conditions.

Its uplifting head high, for instance, could give users a break against unstable emotions and overwhelming dread.

It is also an effective painkiller than ease away aches and pains.

Dawgfather OG is not one that strikes users within seconds after the first few puffs.

Instead, it takes its sweet time, around 15 minutes, before swarming the mind in a mild euphoria that gradually intensifies.

It clears the mind, calming the nerves against strong worries.

In its place, there is an innate sense of happiness that improves the mood. \Preparing snacks ahead of time is a good idea.

Although subtle, the mild invigoration stimulates the appetite. Having some food around removes the hassle of having to get up and go to the kitchen.

The Indica buzz starts two to three hours after the first puff. It relaxes the muscles, releases tension from the joints, and soothes the body. No doubt, one feels more limber with regard movement.

However, it does not entice users to move around or complete tasks.

At the end, the tingling sensation develops into a sedating heaviness that settles in the limbs. It makes the eyelids droop until, eventually, users fall fast asleep without even knowing it.

Dawgfather OG is a pungent strain. It emits a strong funky smell that many would consider to be gas-like.

With it are hints of pepper and wood along with a sharp Kush.

Some coughing can be expected from toking Dawgfather OG.

After all, it has sharp notes of Kush along with an equally distinguishable chemical taste of gas as well as spicy pepper.

Subtly counteracting it is an aftertaste of wood that comes on the exhale.

Dawgfather OG comes with very few side effects. Usually, it is limited to dry eyes and a cottonmouth, but the offshoots can sometimes branch out to dizziness.

All are mild though and can be easily ignored. But, to be safe, users should consume the bud in moderation to keep the high pleasant.

It is not wrong to assume that Dawgfather OG is a recreational strain. After all, that has been the assumption of cannabis for a long time.

Still, its therapeutic benefits are not to be discounted. Its uplifting high reduces stress levels while also managing psychological distress.

At the same time, it also helps calm the nerves and clear the mind. Thus, users suffering from depression, anxiety, and PTSD may find comfort in its soothing euphoria.

It could also be used in place of opioid-based medicine.

It has potent pain-relieving qualities that appease a wide variety of aches and pains without the negative side effects that come with synthetic drugs such as nausea.

In fact, it is able to appease gastrointestinal pains that could lead to problems to digestion and vomiting.

And, as an added bonus, it stimulates the appetite so patients with eating disorders may enjoy food without pain or guilt.

At the comedown, it induces a heavy-limbed buzz that makes users drowsy.

People with insomnia will find that it is an uncanny reprieve against the problems that may arise while trying to slip into unencumbered slumber.

Moreover, its sedating properties enhance the overall quality and quantity of sleep.

Dawgfather OG is a relatively tall plant that some home growers may have difficulty cultivating it indoors, especially when designated growing areas have low vertical space.

Thus, keeping it short is essential. Otherwise, it could cramp small spaces.

It works best under a Screen of Green setup which manages its height and brings up the lower nodes so that it absorbs similar amounts of light.

At the same time, it helps create a bushier plant by weaving the branches into a net situated above the current canopy.

Together with another technique called Topping, it could produce multiple budding sites that enhances the yield while shortening the vegetative period.

Outdoors, it has a preference for sunny and semi-humid environments similar to that of the Mediterranean.

However, this is not to say that the plant does not perform well in the northern hemisphere where the days are shorter, and the temperatures are lower.

It not only has a sturdy frame but also excellent immunity against many unpredictable elements such as light rains or a sudden breeze.

Exposing the plant to cooler temperatures will bring out its striking colors of azure and royal purple.

Against a backdrop of sparkling trichomes, it produces an eye-catching similarity to gems.

It takes Dawgfather OG between 8 to 10 weeks of flowering to fully mature into harvestable buds.

Once ready for harvest, growers can expect at least 12 to 16 ounces of buds per square meter.

Highly adaptable, it should come as no surprise that Dawgfather OG matures earlier than most Sativa-leaning strains.

By the second to the last week of October, each plant will produce up to 16 ounces of buds per plant.

Have you ever smoked or grown your own Dawgfather OG?