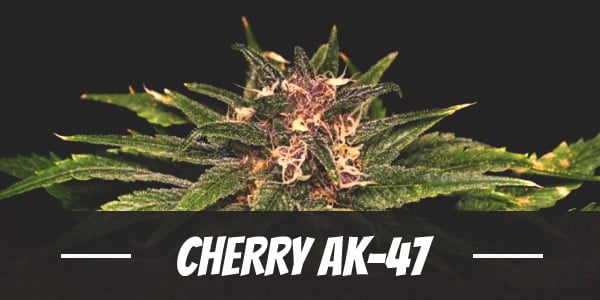 The AK-47 is one of the most popular and widely used assault rifles in the world. So, having a strain named Cherry AK-47 tells us a couple of things. One is that it likely has a cherry flavor. Another has got to have something to do with how it works.

As it turns out, this strain is aptly named as it could bring on an onslaught of head high that could border on being psychedelic. Like the assault rifle, use a small amount for a semi-automatic like cerebral high, or use to the max and let the strain go fully-automatic with the narcotic-like effects.

Cherry AK-47 is a rare phenotype of the hybrid strain AK-47. It was developed in the US and made available for the medical markets in California, Arizona, and Colorado.

The strain is not highly popular among recreational users who seek exceptional levels of potency and high. However, Cherry AK-47 is renowned for its medicinal value among patients suffering from various types of health conditions.

The strain is specially bred for its cherry appearance and flavor. Thus, the buds of Cherry AK-47 appears to be reddish-purple in color and its aroma is reminiscent of cherry.

One of the best things about most cannabis strains is in its ability to swing the mood. In the case of Cherry AK-47, it does a wondrous job of uplifting one’s mood.

The 70% Sativa-dominant Cherry AK-47 assaults the head at the onset, taking care of business by wiping away the negative forces. As a result, consumers are left feeling happy in the aftermath, or for some, even euphoric.

With a THC level that has been measured to reach up to 26%, this strain is not to be taken for granted. The psychoactive ingredients of Cherry AK-47 not only gives an intense mental high but one that could also feel psychedelic. For this reason, first-time users of cannabis are better off starting with a milder strain.

Although the Indica side of Cherry AK-47 is smaller, its effects on the body are evident as it starts to creep in. As the intensity level of the cerebral high tapers a little, consumers start feeling the body relaxing. As the intensity of the mental high continues to fade, consumers are more likely to feel tired and drowsy.

The Cherry AK-47 has quite an interesting aroma. It has a skunky and earthy smell, as well as the distinct smell of fuel and pine that is pleasant enough, with the addition of cherry that makes it even better.

Despite the strong odor it emits, the same aroma is not overwhelming to the taste. While the hint of diesel is easily detected in its fragrance, it tastes more like citrus with sweet cherry blended in.

Guns are not for everyone, let alone a powerful assault rifle. In the same manner, the Cherry AK-47 strain is also not for everyone. The intensity of the cerebral high can cause consumers to feel dizzy. For that reason alone, this is not the best strain to use during the day. Furthermore, it could also raise one’s anxiety level, as opposed to lessening, and to a certain degree, could also cause one to feel paranoid.

The best recommendation with the use of Cherry AK-47 is to use small amounts to test before progressing to using a little more. It would be dependent on how the body reacts. Even for seasoned cannabis users, it is in their best interest to follow this suggestion.

Besides the above-mentioned negative reactions, a couple of common reactions with the use of cannabis would be dry mouth and dry eyes.

After reading through the negative reactions, it is strange to see that there are medical cannabis users who use the Cherry AK-47 to help them deal with depression. It so happens that this strain is among the few that could reverse the benefits due to physiological response or in some cases, overusing.

Tutankhamon is a fairly easy plant to grow. Read our full review for attributes, yields, flowering period, origin and more!

Generally, most people who use this strain benefit greatly in reducing the stress levels. In turn, this helps some people manage other mental issues that cause the stress levels to go up in the first place such as depression. Another known benefit of using Cherry AK-47 is in pain relief.

The intense mental high and complete body relaxation are conducive to another popular use of this strain. It is likely that people who use this strain would feel sleepy, and this is something that should help those who have trouble falling asleep. It is for this reason, too, that the Cherry AK-47 might be better to use at the end of the day.

There is not a lot of information about cultivating the Cherry AK-47. Suffice to say, being a phenotype of AK-47, they should grow with the same climate or environment.

From the AK-47, we know this strain could be grown both outdoor and indoor, as well as in a greenhouse. This cannabis plant is susceptible to mold, which means that the humidity level has to be monitored closely, especially if grown indoor. As a matter of fact, most people do grow this plant indoor due to the strong odor it emits. Installing a carbon filter in a grow tent takes care of that and neighbors would have no idea what one is up to.

Growing indoor means that it is possible to restock ammunition in a shorter period of time. Within 53 to 63 days, this plant should give growers a yield of up to 17 ounces per square meter.

Cherry AK-47 should be ready for harvest by the third to fourth week of October and give the grower an ammunition of around 17 ounces per plant.

What is the Cherry AK-47 strain yield?

Cherry AK-47 yields 12 to 17 ounces per square meter indoors and 17 ounces or more per plant outdoors.

How much THC does Cherry AK-47 have?

What are the origins of the Cherry AK-47 strain?

Cherry AK-47 came from a rare AK-47 phenotype, and was first bred in the US.

Have you ever smoked or grown your own Cherry AK-47? Please let me know what you think about this marijuana strain in the comments below.