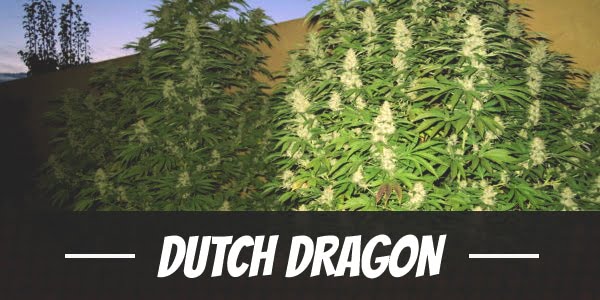 . For medical users, it often offers pain relief. Also, its mood-altering properties can also help in dealing with mental health issues. The same effects are also sought after by recreational users. For instance, using the Dutch Dragon is akin to getting a ride on these mystical creatures. In a while, we will show how it feels to use this strain.

From all accounts, it traces its lineage to an African Sativa. It appears that Paradise Seeds took a strain from Swaziland, Southern Africa and brought it to Netherlands. There, they used the Sativa strain to breed the Dutch Dragon in 1994.

It also appears that there is an improved version of the Dutch Dragon in 2002. In this case, it is a cross between Durban Skunk and an unknown Californian Indica. Exactly how this 2002 version relates to the original, we have no clue. As such, it is reasonable to assume that these are completely different strains.

From Paradise Seeds, the Dutch Dragon has already distinguished itself. Already, it has won the Bio Category of the 2006 High Times Cannabis Cup. As such, we can expect a vigorous growth and production.

Getting on the Dutch Dragon is a treat in itself. Users should hang on tight as the mighty animal soars to the sky. Such is how it feels as its effects start to kick in. It delivers an uplifting feeling that is boundless, and as they say, the sky is the limit. From feeling happy to euphoric, this strain does not let up.

Of course, many other strains can deliver the same effects. In the case of the Dutch Dragon, it does not become overwhelming nor does it cause a foggy mind. Instead, users tend to have a clearer focus. Even better, the boost in energy helps people finish tasks.

Dutch Dragon also comes with a small Indica side. All throughout the incredible cerebral high, it gently creeps in the body. As it envelops the whole body, users feel their muscles loosening. The complete body relaxation that this strain brings on blends in smoothly with the mental effects.

Imagine soaring in the sky and enjoying the freedom of movement. Using the Dutch Dragon takes away the limitations of the mind. Such is the experience of using this strain, and this will go on for two to three hours.

In spite of these extraordinary traits, Dutch Dragon also is not the easiest strain to use. We have more on this in another section.

If the mystical dragons were real, they must be dinosaurs. For that reason, they must be quite smelly. The Dutch Dragon, indeed, comes with a peculiar scent. But unlike the slimy odor of the modern day living dinosaurs, the strain emits a pleasant fruity sweet fragrance.

As pleasant as it smells, it is more delightful to the taste. The scent of Dutch Dragon carries over with a tangy hint of orange and tangerine. As a result, it is one of the better tasting cannabis ever created.

Dragons are cute, but they are also vicious animals and certainly not domesticated. As such, they can be tough to handle. Because of that, new and novice users will want to be aware of these reactions.

Many users have reported feeling more anxious or paranoid while using this strain. For this reason alone, those who are going through anxiety issues should refrain from using it. At the same time, it is also likely that users will have a headache. In some cases, too, some people feel dizzy.

These adverse reactions are a cause for a pause. Although manageable, they are also a nuisance. One thing to note is that these symptoms worsen when users smoke too much.

In spite of its adverse reactions, there are still plenty of reasons why the Dutch Dragon is useful. For medical marijuana users, its ability to uplift the mood is helpful in battling depression.

The Dutch Dragon can also breathe out a fire to wipe away pains and inflammations. Humor aside, the pain relief traits are beneficial to people with chronic illnesses.

One of the effects of using this strain is in appetite. Most people, an hour or two after using, are likely going to feel hungry. Anyone who needs help eating more can use a few tokes of the Dutch Dragon.

It is not easy to cultivate the Dutch Dragon as it has its quirks. Nonetheless, one grown to full maturity, it can be rewarding.

Indoor, the plant is fine using hydroponics, but the better option is to use soil as the medium. In this way, the buds can have the best flavors. Due to its vigorous growth, growers will tend to it more than usual. It also adapts well to the Screen of Green training method.

For growers who can cultivate marijuana in the open, the great news is that it will result in a bountiful harvest. The Dutch Dragon, true to its African lineage, will want a lot of sunshine.

The plant is ready for flowering from the 9th to 10th week. As an option, growers may delay it by a week or two to allow for more vegetative growth. Once it is ready for harvesting, each square meter will have a yield of 18 ounces.

Dutch Dragon starts its flowering stage during the third week of October. Aptly named, each plant produces a draconian yield of 36 ounces.