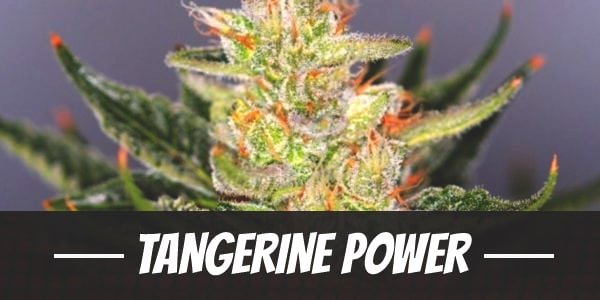 Tangerine Power lives up to its name. It smells like fruit and even tastes like one. Though it is highly coveted for its energizing terpene profile, many enthusiasts appreciate it for its powerful cerebral buzz that makes a dreadful day at work bearable.

Its intended use is therapeutic though. After all, its creator Sin City Seeds is a team made up of highly skilled medical marijuana breeders.

To develop such an herb, they took the top-notch Agent Orange for its citric flavors and mind-boggling effects then paired it Blue Power. The latter influenced the structure of its dense buds.

The resulting Sativa-dominant offspring lives up to its parent strains. Its potent THC levels average between 15% to 19% which make it perfect for recreational use as well.

It even won 1st Place in the Best Shatter category during the NorCal Secret Cup.

Tangerine Power is the go-to smoke for people who want to get high quickly. Unlike Indica-leaning creepers, its onset is a stimulating head high that begins almost immediately after the first puff.

Like a shot of espresso, it keeps users alert throughout the day while simultaneously inspiring a sense of happiness from within.

In time, the uplifting tingling sensation begins to trickle down from the temples to the rest of body. It relaxes the muscles and frees away tension so users can move with relative ease. All that is without the feeling of sedation.

Overall, Tangerine Power is a great wake-and-bake strain that is best used in the morning. Otherwise, it can keep users up in the dead of night.

Tangerine Power smells much like its namesake. It is fruity and sweet. Broken apart or combusted, it releases an earthy aroma that complements the earlier hints of citrus.

Flavor is one of Tangerine Power’s enticing selling points. Drawing in its smoke is almost like drinking fresh orange juice. Blending with its citric sweetness is a tanginess that is accentuated by an earthy aftertaste on the exhale.

The most common reaction to marijuana is dehydration. It is most notable in the eyes and the mouth especially once the moisture-inhibiting cannabinoids begin to interfere with the production of saliva.

Both usually go away after a few hours due to their mildness. Still, users may down a few glasses of water to stay hydrated all throughout the high.

At times, Tangerine Power can green users out. It is a condition characterized by either a mild headache or temporary dizziness and a keen sense of awareness which often triggers anxiety.

Apart from individual tolerance, one’s disposition is a huge factor in exacerbating the unpleasant outcome. For this reason, marijuana must always be used with caution.

Sin City Seeds dedicates itself to providing premium medical marijuana strains to patients and caregivers alike. Thus, it is not surprising to find that Tangerine Power carries sufficient therapeutic value.

Moreover, at 1%, its CBD content is already higher than most strains.

In doing so, it reduces stress levels by relieving the mind of overwhelming dread by inducing its happy high.

At the same time, it appeases symptoms of depression and mental health conditions like PTSD. It may even delay its early onset.

The same stimulating compound also appeases the physical manifestations of stress such as fatigue and headaches. From the temples, it delivers a soothing yet reinvigorating buzz that relaxes the muscles through and through.

Tangerine Power blends traits of its Sativa and Indica genes well. Its stalks grow tall but are thick. At the same time, its branches do break off easily due to the weight of its heavy buds.

Moreover, the plant itself can withstand problems brought by strong gusts of wind and pests.

Sturdiness, however, does not guarantee an easy grow. This is not to say Tangerine Power does not perform well outdoors but rather, it requires the constant care of an expert to flower successfully.

For this reason, many commercial growers prefer cultivating their strain in less volatile settings like greenhouses. Such controlled environments can easily be adjusted to suit the needs of the plant at a certain phase.

Applying the Screen of Green and Low-Stress Training methods will encourage lateral branching while keeping female plants from turning into hermaphrodites.

Unless, of course, the seeds were already in feminized form. As for mediums, soil brings out the best flavors but hydroponics will keep ensure the bud is free of chemicals.

Tangerine Power has an indoor flowering period of 8 to 9 weeks. Some experienced users may see their strain blossom as early as 7 weeks. Regardless, it yields between 12 to 19 ounces of buds per square meter.

Outdoor grown Tangerine Power blossoms around the last week of September to the second or third week of October with each plant yielding at least 12 ounces of buds.

Have you ever smoked or grown your own Tangerine Power? Please let me know what you think about this marijuana strain in the comments below.