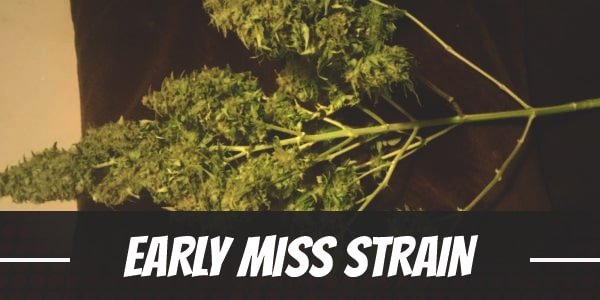 The emergence of autoflowering strains has revolutionized the cannabis industry. It streamlined the growing process by reducing the waiting time rather than waiting for months. Additionally, neither yields nor quality is compromised despite the shorter flowering period. As such, it comes as no surprise that it has won the hearts of many.

Early Miss falls under this group of strains. It is a sturdy quick-flowerer that entices many with its dense buds. Each is coated thickly in trichomes, alluding to its potency of up to 21%. While it is leans genetically toward the Indica side of the spectrum, it delivers an impactful cerebral high that increases sociability and boosts creativity without the feeling of heaviness.

First is Big Bud, which is a heavy yielding strain that produces huge buds. White Widow, on the other hand, was named after its almost white coat of trichomes.

Although predominantly Indica, Early Miss is not a slow starter. Its effects hit users immediately with users enjoying a light pressure that begins from between the temples. Swarming the mind as it intensifies, the euphoric rush leaves users feeling clearheaded and mentally stimulated.

The resulting upbeat disposition is often what pulls users into a creative trance. It inspires innovative ideas and allows thoughts to flow freely so one may see perspectives in a different light. Often, too, people feel more comfortable discussing concepts with peers or friends. Although, some prefer reminiscing happy memories instead.

Gradually, the same buzzing sensation ebbs down to the rest of the body. It soothes each muscle until users are fully enveloped in a wave of relaxation. In spite of its effects, it is not at all sedating. Rather, it keeps one from feeling tired while brainstorming.

Early Miss has a strong hold on enthusiasts with a nose for chemical strains. It has strong overtones of ammonia made even more pungent by cool notes of eucalyptus. Crushing the buds then combusting it releases herbal and spicy notes of pepper.

On the throat, the harsh smoke can sometimes lead to a coughing fit. When savored, it washes over the mouth with the spicy taste of mixed herbs accentuated by notes of pepper. On the exhale, it leaves the same chemical aftertaste of ammonia which rests on the palate for a while even after the last puff.

Even seasoned users should exercise caution when using Early Miss. Apart from causing dryness in the eyes and mouth, it has the capacity to green users out with symptoms of dizziness and a subtle feeling of paranoia especially when used outside of one’s limits. Although users only experience a headache most of the time, it is still important to practice pacing and moderation while staying hydrated throughout the session.

In delivering its head high, for example, it uplifts spirits, instills mental calm, and extinguishes stress. For the same reason, it is also effective at managing symptoms of depression along with other mental health issues such as PTSD.

On the physical aspect, Early Miss induces a soothing body buzz that helps ease aches all over the body. As it reaches the stomach, it relaxes hunger pangs that often interfere with one’s ability to eat. It stimulates the appetite as well as prevent users from vomiting with its antiemetic properties. As such, it is a great companion for users suffering from anorexia or cachexia.

A sturdy plant, Early Miss is great for enthusiasts aspiring to grow their own medicine. It rarely requires support because of its sturdy Indica genes. Fazed with strong gusts of wind, its stalks neither bend or break. Meanwhile, its branches do not snap at the weight of its heavy buds.

Moreover, it blossoms quickly regardless of when and where it is cultivated due to its ruderalis genes which is the main component of its autoflowering structure. Growers may need to prune the plant often though as its compact structure can sometimes harbor moisture brought about by humidity. If left alone, it can attract mold or mildew which possibly destroy the plant.

Like its predecessors, Early Miss is quite eye-catching. While it is not as large, it yields attractive buds that boast deep green colors with purple hues at times. On top of that, a rich coating of trichomes covers each.

To emphasize its flavor, one may take advantage of mediums like soil. For those who prefer producing cleaner buds, using mediums like hydroponics may be utilized. Regardless, the autoflowering feminized seeds from Crop King Seeds will produce an all-female batch.

Big Bud’s genetics has given Early Miss the ability to produce more yields than typical autoflowering strains. It can yield up to 7 ounces per square meter when it’s grown indoors. All of that will be ready in just 7 weeks after its seeds germinate.

Early Miss finishes up in exactly 7 weeks after it first sprouts outdoors. In the right conditions, the strain can produce up to 4 ounces per plant.

What is the Early Miss strain yield?

Early Miss yields Up to 7 ounces per square meter indoors and Up to 4 ounces per plant outdoors.

How much THC does Early Miss have?

What are the origins of the Early Miss strain?

Early Miss was created from a mix between Big Bud and White Widow.

Have you ever smoked or grown your own Early Miss? Please let me know what you think about this marijuana strain in the comments below.