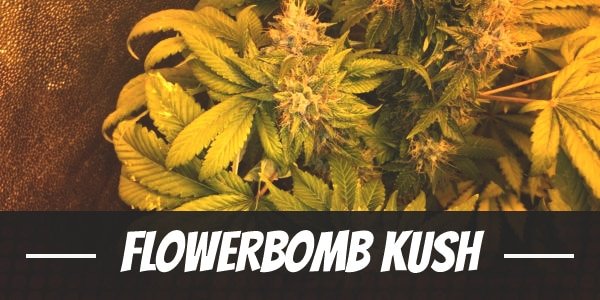 Flowerbomb Kush is one of the finest cannabis in the world. Credit goes to Strain Hunters Seed Bank. Some may be familiar with their TV show documenting their search and effort in collecting and preserving the best pure strains worldwide. They also take a lot of pride in only releasing what they feel are the best of the best.

To create Flowerbomb Kush, they used one notorious and one legendary hybrid.

The notoriety of Green Crack is mostly because of its name. Hence, some people now call it Green Cush. At any rate, where it is notorious is in the intensity of its energizing Sativa buzz. On the other hand, the other parent strain OG Kush has been around for at least two decades. It has proliferated well in Colorado and California where it has spawned several highly regarded hybrids. There are only a few lineages that have been dominating the cannabis scene, and OG is one of them.

Flowerbomb Kush leans towards the Indica side. Obviously, it is a trait inherited from OG Kush. Still, its Sativa effects are also not to be underestimated. Such is a testament to how potent Green Crack is and even with a small amount; it can be overwhelming.

Flowerbomb Kush is not a fast-acting strain. In some instances, it may take up to ten minutes or more before it exerts its full effects. Still, during the onset, users can also ready feel a steady, energetic buzz that tends to uplift their mood. This warm and calming sensation also helps sharpen the mind and focus.

Users tend to be more social with occasional bouts of laughter. It can also lead to people being more talkative especially as they seem to have ideas popping in and out of their head. In other words, the strain unlocks the creative side of its users.

Overall, the Sativa effects of Flowerbomb Kush is mild and soothing, but it does help in keeping users stay motivated.

And then the physical body effects kick in. The strain now delivers an intense relaxing high that complements well with the cerebral effects. Used in only a small amount, most users will have no trouble in getting up and completing their tasks. However, using a little more than one should, then it can cause an intense cerebral experience as well as couch-lock.

From mild and gentle to psychedelic and immobile, such seems to be the range of the effects of this strain. It is evident that this hybrid amplifies the best of its two parent strains.

Flowerbomb Kush has a very pungent and refreshing herbal odor that has a floral note with a mild spicy hint. Although its aroma is strong, it is also not overwhelming. Instead, most people find it intensely pleasant.

Even as it comes with a delightful aroma, so too are its flavors. Users describe the earthy taste as reminiscent of OG Kush, and it is followed by a fruity note.

During the onset of the cerebral effects, some users may feel a light pressure on the temple between the eyes. It then leads to dry eyes and possibly dry mouth. Such reactions are not entirely unexpected, though.

However, Flowerbomb Kush does come with a THC content of up to 19%. Because of that and the psychoactive traits inherited from Green Crack, users must be careful with the amount they consume.

The same trait that made OG Kush famous among medical cannabis users is also present here with Flowerbomb Kush. It can wipe out stress with ease. As a side benefit, it helps people with mental health disorders manage their emotion better.

The heavy-hitting Indica traits of this strain are also useful for pain relief. In particular, many of its uses is to help deal with spasticity and muscle spasms. Generally, the cerebral euphoria enhances the physical effects by taking the focus away from pains and aches.

People with trouble eating and needing help to stimulate their appetite can also use this strain. During the comedown, it is not unusual for users to feel hungry. But because most people may end up sleeping, then these people will wake up starving as if they have not eaten for days.

Flowerbomb Kush, in general, is not a difficult strain to grow. In fact, even beginners will be able to cultivate it successfully. It thrives well in both the indoor and outdoor environment.

In only 8 to 9 weeks, the plant is ready for flowering. One thing that growers will want to consider is using soil as a medium instead of hydroponics. That is to ensure that it has rich flavors. By harvest time, it will have a yield of as much as 28 ounces under 1000w of HPS grow light.

Left in an open area, Flowerbomb Kush can grow quite tall. It starts transitioning to the next stage before the start of October. Although conservative estimate puts its yield at some 16 ounces per plant, it can be twice as much under perfect conditions and the care of experts.

Have you ever smoked or grown your own Flowerbomb Kush? Please let me know what you think about this marijuana strain in the comments below.