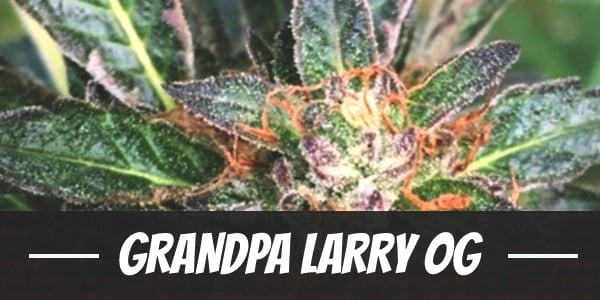 It goes without a doubt that Granddaddy Purple is one of the best strains ever. In fact, it once dominated the industry for months after its 2003 introduction by Ken Estes. It was, in almost every way, perfect – from its smooth smoke to its dreamy euphoria. However, in striving to achieve perfection, its breeders Grand Daddy Purp crossed it with the famous Larry OG which would further enhance its ability to relax users without possibly overwhelming them.

Interestingly, though the two produced a predominantly Indica genes, Grandpa Larry OG’s effects are more akin to that of a hybrid. It induces a cerebral high with impressive wake-and-bake qualities, which is rare for herbs similar to it. At the same time, it also produces a totally relaxing buzz that busts out stress from every inch and crevice of the body.

Though it is widely recognized for its recreational effects, Grandpa Larry OG is like everyone’s caring grandfather who is ready to ease away the aches and pains. Thus, making it an exceptional medicinal strain.

Grandpa Larry OG is a great strain to use in the late afternoon or early evening. Though predominantly Indica, its effects are not at all tranquilizing to the point of immobility. Rather, it is a soothing sense of calm that allows one to stay clearheaded throughout the day.

During the initial onset, it delivers an uplifting buzz that does not manifest until fifteen minutes after the first two to three puffs. However, once the euphoric high begins, it enhances the mood and stimulates the mind. The smooth flow of thoughts sparks creativity and allows one to come up with new ideas.

Accompanying the newfound happiness is a deep sense of relaxation that ebbs down from the temples as a light pressure. With each puff, it intensifies until each muscle is relieved of tension. The soothing sensation is also what allows one to work for longer periods of time without feeling tired.

Grandpa Larry OG has a THC level of 18%. As such, it is potent enough to impress but not to overwhelm novices looking to improve their tolerance.

A whiff of Grandpa Larry OG’s sweet scent of grapefruits is enough to tickle the nasal senses. Enhancing it are subtle notes of lemon and grape which are accentuated by the herbal fragrance of sage especially once the buds are crushed and combusted.

Grandpa Larry bursts with a myriad of flavors in the palate. It is sweetly citric with obvious tinges of grapefruit and lemons. Meanwhile, on the exhale, its rich smoke washes over the mouth with the taste of sage and other herbal spices.

Grandpa Larry OG has its fair share of side effects. One of which is dryness, which is an unavoidable reaction to marijuana’s moisture-inhibiting cannabinoids. Symptoms usually arise in the eyes and the mouth however, neither are a cause for concern due to their mildness. Still, users who experience discomfort may opt to stay hydrated by drinking a few glasses of water throughout the day.

In high doses, Grandpa Larry OG can also lead to greening out. The condition is mainly characterized by a temporary dizziness that can potentially lead to a subtle feeling of paranoia as sensitivities toward one’s surroundings heighten. Typically, though, users only experience a headache. Still, it is best to use the strain with caution.

It is not surprising for Grandpa Larry OG to contain multiple health benefits. After all, it was developed by breeders from Grand Daddy Purp who are dedicated to producing the best medical marijuana strains in the industry. True enough, through its cannabinoids, the Indica-dominant herb provides users and patients with a reprieve against various issues.

In inducing its calming head high, for example, Grandpa Larry OG effectively reduces stress levels as well as alleviate symptoms of depression. The two afflictions are vital to one’s well-being and, if left unattended, can snowball into a crippling feeling of anxiety and overwhelming helplessness.

A natural muscle relaxant, Grandpa Larry OG gets rid of tension in the body and reinvigorates it. In doing so, it eases away the feeling of exhaustion or fatigue. Meanwhile, its anti-inflammatory properties reduce redness and swelling which can sometimes trigger spasms depending on the area affected.

Typical of Indica-dominant strains, Grandpa Larry OG is a short and stocky plant. Its stalks are quite sturdy and will withstand strong gusts of wind. However, this does not guarantee a great grow.

The plant is quite sensitive to high levels of humidity with its compact structure harboring some of the moisture which will attract mold or mildew. Moreover, it is not a heavy feeder and will probably suffer from nutrient burn or root rot if such mistakes are continuously made.

This is not to discourage beginners from growing the strain. Rather, that it may pose quite a challenge. But, with the right techniques, precision, and the help of a seasoned grower, it is still possible to cultivate Grandpa Larry OG. Applying the Sea of Green, for example, will encourage better trichome production. Meanwhile, trimming the plant often will help distribute light, air, and nutrients better.

One can also utilize hydroponic systems to produce “cleaner” buds or use soil to bring out its full flavors. Regardless, the plant will produce buds with striking purple buds that are shaped like popcorn.

At the moment, Grand Daddy Purp sells Grandpa Larry OG’s seeds in regular form. As such, aspiring growers will have to add extra measures such as soaking to increase the chances of acquiring a female. Low-Stress Training, on the other hand, will ensure calyx-filled plants do not turn into hermaphrodites.

Grandpa Larry OG has a flowering period of 8 to 10 weeks. Once mature, it yields an average of 10 to 12 ounces of bus per square meter.

In the northern hemisphere, Grandpa Larry OG blossoms around October. Usually around the second to the last week. Once ready for harvest, it produces at least 12 ounces worth of cured buds per plant.

Have you ever smoked or grown your own Grandpa Larry OG? Please let me know what you think about this marijuana strain in the comments below.