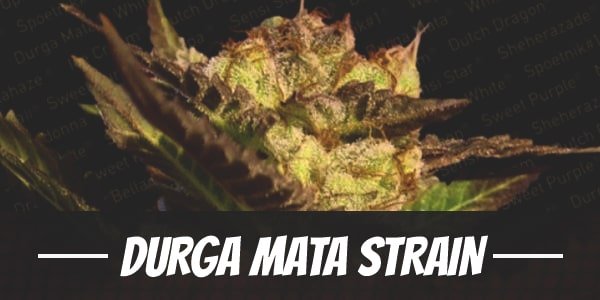 Durga Mata, like the Hindu warrior goddess, is praised for its robust resilience in the face of problems. And, true enough, its strength shines through in its ability to ward of pests and various diseases to keep the grow area safe.

In developing the Mother Goddess, Paradise Seeds took a variety of South Asian Indica and paired it with an unnamed strain resulting in the almost pure Indica. While its parents remain a mystery due to breeder secrecy, Durga Mata is beloved by many for its subtle mental stimulation and physical psychedelic effects which is a great recreational companion as well as medicinal relief.

However, unlike other Indica-leaning strains, its relaxing qualities do not come with the ability of to lock people to the couch in spite of its potent levels of THC which ranges from 18% to 22%.

Durga Mata begins slowly with a gentle cerebral buzz that puts users in the mood for a relaxing afternoon. It is pleasant and overall tranquil. And, as the initial onset fully manifests, it inspires a sense of happiness from within that lights the path to inner peace.

Though only mild, the head high is still stimulating to the brain and the stomach by extension. As such, it is best to prepare some snacks ahead of time to diminish the hassle of going to the kitchen. This is because the bud encourages a hearty appetite that helps users replenish any lost energy.

Gradually, a tingling sensation begins to manifest from the back of the head. It oozes slowly to the rest of the body as it intensifies with each puff. Calming and soothing, it relieves the muscles of tension. In moderate amounts, the physical buzz is not at all sedating. However, those who overconsume the strain will notice a heaviness in the limbs that makes the eyes droop until one is deeply asleep.

Safe to say, Durga Mata is best used during late afternoons or in the evening. Its psychedelic effects allow one to finish tasks before kicking back to a full-bodied relaxation. Although morning use is not advisable, users may still enjoy the strain provided it is used within limits.

Durga Mata is similar to incense. It hits the nose with a spicy herbal fragrance accentuated by a mild fruity aroma. When the buds are broken apart, it releases a pleasantly sweet and earthy fragrance into the air.

Savoring Durga Mata requires drawing it in and holding in its smoke. In the palate, its sweet fruity flavors burst into a myriad of citric goodness with subtle undertones of wood. Along with it are notes of herbs and spices that, upon exhale, develop into a fascinating tobacco-like aftertaste.

Due to its potency, Durga Mata can sometimes startle users with its heavy-hitting high. dizzy for a while before they adjust to the high. Additionally, most get a cottonmouth when they partake in prolonged sessions. With larger doses, it’s also possible to get a case of dry eyes. Luckily, an easy way to remedy the two side effects is to drink some water.

Durga Mata is of significant therapeutic value to patients and users alike. Its cannabinoids, such as THC, CBD, and terpenes, work together in synergy to provide relief against various afflictions including chronic stress.

In calming the mind with its happy high, Durga Mata appeases the overwhelming dread and anxiety that usually comes with being constantly exposed to stressors in life. In a similar manner, it also manages symptoms of certain mental health issues such as depression or PTSD.

However, as a predominantly Indica strain, Durga Mata’s best use is alleviating physical nuances. Among which is the pain caused by sudden contractions. And, with its anti-inflammatory properties, it reduces redness and swelling which can sometimes trigger unwanted muscular spasms.

Thoroughly relaxing, Durga Mata not only hastens the onset of sleep but also enhances its quality and quantity. As such, it is a great bedtime companion for users with insomnia. Regardless, it is certain that one will wake up the next day feeling refreshed

If left on its own, Durga Mata can probably flourish by itself, needing only water. It fits into most growing spaces and rarely requires an early topping unless the room were truly limited. In the outdoors, it can withstand various problems such as fluctuations in weather and pests. And, despite its affinity for a Mediterranean climate, it still flourishes in regions with cooler weather such as those in the north.

Still, growers may unlock its full potential by applying various growing techniques. An effective method to increase yields is to use the Sea of Green method. It also encourages the plant to grow more branches and produce an extra amount of budding sites.

Durga Mata, like most Indicas, flowers quickly at around 7 to 9 weeks. Cultivated under the care of a seasoned grower, it normally yields 14 to 16 ounces of buds per square meter.

Growers the northern hemisphere usually see flowers bloom from the last week of September to the middle of October. Those in southern latitudes, on the other hand, will see Durga Mata blossom around the first week of April. Regardless of where one grows the herb, however, each plant will produce at least 18 ounces of buds.

What is the Durga Mata strain yield?

How much THC does Durga Mata have?

What are the origins of the Durga Mata strain?

Have you ever smoked or grown your own Durga Mata? Please let me know what you think about this marijuana strain in the comments below.