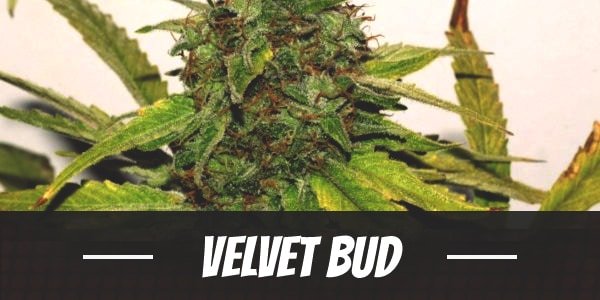 Velvet Bud is among the many recreational herbs that can pass as a daytime strain thanks to its great wake-and-bake qualities. Its high-flying head high, though intense, prioritizes a smooth stream of conscious that not only boosts creativity but also productivity. This makes it a perfect morning companion that helps one get through the day.

In genetically engineering its smooth smoke, its breeders took two of heavy-hitting strains that have dominated the industry. Since its introduction in the 70s, enthusiasts have raved about Blueberry for its stress-busting high and fruit-flavored terpenes. Meanwhile, Dutch Treat is the top bud of choice among goers of Amsterdam coffee shops for its refreshing aftertaste that soothed the throat. Moreover, it has an unforgettable cerebral high.

In using two Indica parents, Velvet Bud’s creators successfully developed a Sativa-leaning strain that could withstand the colder weather of northern latitudes. It is also quite potent, with THC levels averaging at 16%. With a smoke that is as smooth as velvet, enthusiasts have flocked to the offspring for its perfect mix of cerebral and bodily effects.

Users may need to double check the bud before putting it in the cart though. There is another Velvet Bud in the market that is an offshoot of Purple Bud. Though its name is the same, its heritage is completely different.

Velvet Bud’s effects begin to unravel not long after it is first smoked. Beginning with an incredibly uplifting surge that will most likely reinvigorate the mind almost immediately after just the first few puffs. It clears away mindless thoughts that only serve to distract users from fully taking advantage of one’s mental faculties.

For users stuck in a creative rut, the mental clarity is a transformative experience. Thoughts transition into ideas smoother as each flow and form freely. With a renewed sense of motivation, it is not uncommon to find oneself completely immersed in tasks or projects. Some even find themselves engaging in conversation to further develop concepts or simply socialize among peers. Regardless, the talkativeness arises as one feels the need to share their newfound theories.

In time, the same invigorating effects find its way to the body. It oozes from the temples as a subtle rush of energy that, with each toke, intensifies until it becomes a stream that fuels users’ need to complete activities. It keeps one from feeling tired in spite of the hours of concentrated work have passed, making Velvet Bud a great wake-and-bake strain.

Velvet Bud blends together the complementary fragrances of blueberries and pine. It is sweet at the first whiff but quickly turns into a refreshing wood as the buds are broken apart through a grinder or combusted.

Every seasoned user knows that to fully savor a strain, it must be drawn in. This is especially true for Velvet Bud which bursts in the palate with the sweet flavors of ripe blueberry at just the first puff. Savoring it reveals the bud’s refreshing undertones of woody pine which leave a smooth aftertaste on the mouth.

It is best to have a drink in hand while using Velvet Bud as it can lead to a cottonmouth and dry eyes. Nothing alcoholic though as it can exacerbate the problem. This is because its cannabinoids interfere with moisture production. Although experienced users usually allow it to go away on its own, the dryness can be quite irritating for many beginners. For this reason, staying hydrated is a must.

The worst effect Velvet Bud has on its users is increasing levels of anxiety. Often, such is a result of overconsuming the strain. However, one’s disposition before the high is also a major factor. Thankfully, pacing and moderation will keep the effects at bay.

Depression is one of the world’s leading disabilities with over 300 million people affected globally. Without intervention, it can worsen until, finally, it takes away the life of the person affected. And, for this reason, it is important to provide a buffer that helps appease or prevent it from developing into overwhelming hopelessness. To this end, Velvet Bud works perfectly.

Its cerebral high not only clears the mind of negativity but also replenishes any lost motivation. Apart from that, it calms feelings of dread which are also commonly present in people exposed to chronic stress. As such, one may also use Velvet Bud as a stress reliever.

A natural painkiller, Velvet Bud also appeases the cramps and pains that come with over exhaustion or fatigue. In inducing soothing body high, it relaxes agonizing pangs in the stomach before encouraging a hearty appetite in even those with eating disorders such as anorexia.

Velvet Bud is perfect for tropical areas where it is exposed to constant sunshine. A resilient plant, it has acclimatized to the hot and humid conditions of many equatorial regions. But, when subjected to colder temperatures, it may need some time to adapt to the new weather. Still, the hardy herb flowers early.

Blue Velvet was bred by DJ Short in the Bay Area decades ago. Read our full Blue Velvet review for more information

For this reason, many growers from the northern hemisphere prefer cultivating the Sativa-dominant in more controlled environments. Apart from added protection against pests, indoor growing spaces allow one to mimic a Mediterranean climate by simply adjusting factors like lighting, temperature, and humidity.

Velvet Bud is set apart by other Sativas because of its size. It grows to a medium height and can fit into most indoor growing spaces. Still, one may top the plant early to keep it short. It may also need some trimming or pruning. This will not only allow light to reach lower-end branches, but also ensure proper air circulation and nutrient distribution.

It takes 7 to 9 weeks for Velvet Bud to finish once the flowering stage is initiated. Each square meter yields 12 to 16 ounces of buds per square meter on average.

Climate and location are two important factors to consider when growing Velvet Bud in the northern hemisphere. In cooler climates, Velvet Bud flowers from the last week of September to the middle of October. Each plant yields at least 16 ounces of buds per plant.

Have you ever smoked or grown your own Velvet Bud? Please let me know what you think about this marijuana strain in the comments below.