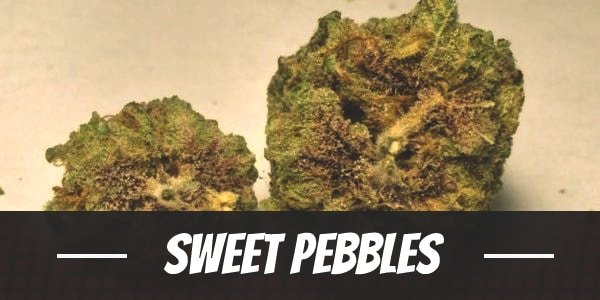 Sweet Pebbles is similar to rock candies in many ways. They are both small, colorful, and delicious. While the latter comes in all the colors of the rainbow, the bud boasts crystal-coated shades of green, blue, and purple. And, when consumed, it bursts in the mouth with an energizing citrus.

With so many options available in the market, it was not difficult to create this strain. First, Fire Bros. took the limited edition Fruity Pebbles for its berry flavors and stunning purple hues.

The Washington-based breeders then paired it with their very own Sour Pebbles. An award-winning strain, it gained popularity as a potent Sativa leaning hybrid with euphoric psychedelic effects.

In essence, Sweet Pebbles is a sweeter, more colorful version of its parent Sour Pebbles. It delivers a classic Sativa high that brightens one’s day.

At up to 21%, Sweet Pebbles is undoubtedly a potent Sativa leaning bud with fast-acting effects. Its initial onset, for example, is characterized by a cerebral buzz that begins almost immediately after the first puff.

As it spreads, a euphoric rush sparks a sense of happiness from within. It reinvigorates users and leaves them feeling upbeat. But, that is not all. The mental stimulation transforms one’s behavior.

Instead of dreading work, many come into the office feeling motivated. After all, the clearheaded high does inspire fresh ideas. And, together with the keener focus, it facilitates the free-flow of thoughts for long periods of time.

In about an hour or two, the Indica effects start to creep up. From between the temples, it sends a tingling sensation coursing through the muscles. As it spreads to each and every crevice of the body, it envelops the user in total relaxation. Instead of being devastating, however, the soothing buzz rewards people with a well-deserved rest.

Overall, the hybrid is a great wake-and-bake strain. As such, it is best enjoyed early on during the day. In moderation, of course. Otherwise, the effects are counterproductive.

Sweet Pebbles has a remarkably unique fragrance. Its earthy aroma and citric scent give off the illusion of freshly picked berries. When grounded or combusted, floral and sour notes fill the air.

As astounding as its fragrance is its strong flavor of blueberries. Drawn in, the citric fruitiness is energizing. On the exhale, the strain gives off a sweet, sugary aftertaste.

Sweet Pebbles, like other strains, causes dehydration. This is typical of marijuana as its cannabinoids usually interfere with the production of saliva. With that said, users end up with a cottonmouth and, to some degree, red eyes.

When used beyond the limit of one’s tolerance, experiencing paranoia is plausible. As a potent Sativa-leaning hybrid, Sweet Pebbles’ clearheaded high can overstimulate the brain. Pacing and moderation, however, will keep the heightened awareness at bay.

Though presumably used for recreation, Sweet Pebbles carries immense therapeutic value. For one, its high levels of THC appease symptoms of stress including irritability, depression, and anxiety.

A natural mood-enhancer, it brings balance to the chaotic mind and instills a sense of well-being. The clearheaded high allows users with ADD or ADHD to focus their attention on one task instead of overwhelming themselves. It is best to prepare snacks, though. After all, the brain does eat up loads of energy.

An effective analgesic, Sweet Pebbles’ relaxing body buzz irons out contractions in the muscles as well as the sharp, stinging pain caused by it. Its anti-inflammatory properties also soothe redness and swelling.

Sweet Pebbles’ growth structure was heavily influenced by its Indica genes. It is hardy and can withstand problems caused by moisture in the air, including bud rot and mildew. Not only that, at 8 to 9 weeks, its blossoms faster than most Sativa-leaning hybrids.

As it enters the flowering stage, temperatures should be lowered to anywhere between 18°C and 26°C. Anything too hot will slow down the plant’s growth and hamper its resin production. It might also accidentally burn away terpenes, the cannabinoid responsible for a plant’s fragrance and flavor.

Sour Pebbles is a sweet and sour hybrid strain from the Washington state area, and is not in for its award-winning properties that have helped this strain garner the respect it deserves. Read our full review!

Once mature, its shape retains the small but dense buds of Indicas. When exposed to cooler temperatures, its once minty green colors turn into a magnificent blue and purple. Against a backdrop of dark leaves, its crystal trichomes make it look almost candy-like.

As alluded to earlier, it takes Sweet Pebbles anywhere between 8 and 9 weeks to finish flowering. Each square meter typically produces up to 16 ounces of buds. Applying the Screen of Green method, however, can drastically increase this number.

Bringing out Sweet Pebbles’ colors outdoors can be a little bit finicky. It requires acute knowledge of when seasons and temperatures change. Generally speaking, each plant should yield at least 16 ounces of buds by the second or third week of October.

Have you ever smoked or grown your own Sweet Pebbles? Please let me know what you think about this marijuana strain in the comments below.