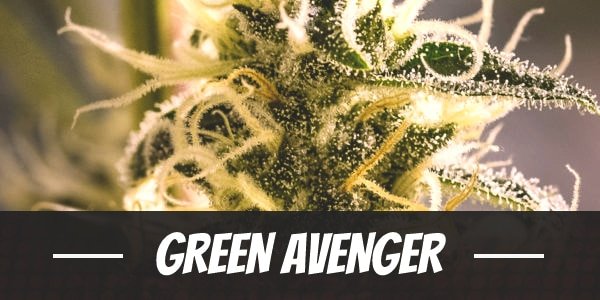 Brothers Grimm has been away for far too long. In their absence, another company TGA Subcool Seeds has continued to create new strains using many from the former. Finally, the long-gone breeder is back, and in designing a new hybrid, they named it after TGA (The Green Avenger).

More than just the name, the Green Avenger brings on a set of wonderful effects that make it a favorite among recreational users. Even in the medical cannabis community, some of its notable traits have not gone unnoticed.

Such is the result of careful selection and adherence to excellence when breeding. To begin with, Brothers Grimm used a male seed from TGA. Using this special male, they then crossed it with Genius. It is one of the best phenotypes of their own Apollo 11 strain.

Some people may recognize Vortex. It is one of the few strains that can literally place one in a whirlpool of Sativa high and has itself, won the 2010 High Times Cannabis Cup Sativa. Meanwhile, the Apollo 11 is one that takes users on an intense journey to space, and the plant grows fast too.

Having mentioned some of the notable traits of the parent strains, it is not hard to imagine what the Green Avenger can do.

All good things must come to an end. Such is the case with the use of the Green Avenger. After hours, its effects will subside. But before that, it takes one to an incredible high before bringing back to a state of bliss and finally ending in deep slumber.

The Green Avenger seems to be always charged and pumped to unleash its raw power on the users. It acts very quick by sending an intense energizing buzz that not only uplifts the mood. It also sends users to a state of euphoria. At the same time, it also unlocks the creative side of the mind ushering in a flood of ideas.

During this time, doing tasks become more comfortable. Even when one is feeling tired, the temporary boost in energy seems endless. In more ways than one, this strain sparks and inspires people to act on their motivations.

Meanwhile, as the mind races, the body settles down as the body high creeps in. It does not take too long once it begins to manifest itself before users find themselves completely relaxed. It does a great job of stabilizing the mental high without going overboard and knocking people out. As such, the Green Avenger is perfect for daytime use.

Besides the remarkable effects it delivers, the Green Avenger also has an insanely pleasant odor. The sweet and earthy scent it emits is influenced by a note of nuts, and that combination can certainly entice people to roll one and use.

Even better than its scent, it is how it tastes that makes it even more delightful. A note of honey while exhaling the smoke makes it so tempting to keep using more.

Some people think that the use of cannabis causes no harm. Although it is true that it comes with side effects, it appears that there are no long-term consequences. Still, these concerns can be quite annoying at times.

Feeling the eyes drying is one of them, and so is having cotton mouth. About the only way to deal with this is to keep hydrated. Despite the minor inconvenience, most people actually end up not noticing because they are drowning in the uplifting mental buzz.

One thing that may also be a cause for concern is that some people reported having a headache. Of course, it lasts temporarily, but nonetheless, it is an inconvenience at best.

Not much people have reported and shared their experience with the use of the Green Avenger. But even if this is a relatively new strain, there are already good indications.

One is that the energizing buzz it generates efficiently wipes away stress. As such, it is not only useful in getting rid of the troubles of the world, but it is also helpful for people with depression and PTSD, ADHD, and other mental health disorders.

Another is that the same energizing buzz is also a good way to counter the effects of fatigue. As mentioned, it is as if users found a way to tap into a source of unlimited renewable energy.

Here is where it does get a little tricky. With regards to cultivating the plant, there is not a lot of details. But based on the few sources we could find, it appears that the plant thrives better indoor than it will be outdoor. Not that it does not grow well in open space, but it seems to have better yields inside the house. Of course, that is subjective and is dependent on the equipment used and the expertise level of the growers.

The plant tends to be bushy with a lot of lateral branching. It should be ready for flowering in eight weeks. Under 1,000 watts of light, it is possible to produce anywhere from 16 to 32 ounces of buds.

As far as we can tell, it grows up to more than 6 feet when planted outdoor. The Green Avenger may not produce as much yield as it can if using hydroponics and powerful lights. One estimate pegs it at around 6 ounces per plant. It should start to flower in the last week of September.

Have you ever smoked or grown your own Green Avenger? Please let me know what you think about this marijuana strain in the comments below.