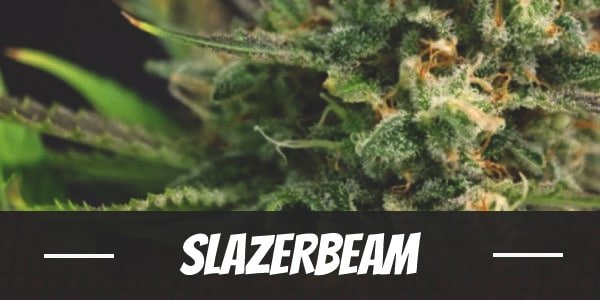 From is not as important as the what. Here is an example, when we say that a cannabis strain comes from Colorado, that is not what people want to know. Instead, it is what it can do that matters. With that, here is a look at Slazerbeam, a relaxing but incredibly energizing cannabis that takes cerebral effects to greater heights.

One of the prominent names in the world of marijuana is Dr. Sanjay Gupta. He is a neurosurgeon and a known advocate of the use of cannabis for medical purposes. In honor of the good doctor, Colorado Seeds not only created a strain but also named it after him. And that is how Gupta Kush came to be, a potent hybrid that can calm the nerves as well as provide pain relief.

Colorado Seeds then use a strain from Green House Seeds, Super Lemon Haze to cross it with their own Gupta Kush.

Super Lemon Haze is a force to reckon with, and it has won two Cannabis Cups to back it up. Known for giving an energizing buzz, much of its Sativa heritage was passed on to Slazerbeam.

Slazerbeam is a Sativa-dominant strain. As such, much of its effects are on the mind and behavior. But that is not to say that it does not deliver physical effects as well. At any rate, it is also a very potent cannabis hybrid. As such, use only a small amount when trying it out for the first time.

Almost as soon as one inhales it, an energizing sensation comes surging into the mind and the body. In an instant, not only does it uplifts the spirit, but it also induces happiness and euphoria. As it continues to intensify, it does not cause haziness or mental confusion. Instead, most of its users feel clear headed with the ability to zero in on their tasks. In other words, it heightens the sense of focus.

Feeling motivated, the cerebral effects of Slazerbeam can help users complete one task after the other. And throughout its effects, it also makes people feel more talkative. As such, it is a perfect cannabis to share with friends. For sure, there is a never-ending topic to talk about as another thing it does is unlock the creative thought process. As a result, ideas come and go in succession.

Meanwhile, its Indica traits creep into the body to provide a soothing feeling and sense of relaxation. It does not cause one to feel lethargic or lazy. But what it does is to keep the cerebral effects in check.

The sweet and spicy odor of Slazerbeam sets the tone for a delightful scent filled with notes of citrus and an earthy freshness. If one were to smell it with eyes closed, then it would not be hard to imagine being in a plantation where lemons are grown.

Adding to the allure and desirability of the Slazerbeam is its pleasant flavors that are reminiscent of ice cold lemon tea with a pinch of sage. When it comes to the aroma and taste department, this strain is a winner.

So, what else is new when it comes to cannabis hybrids, both the old and the new? Hence, one can expect to experience dry eyes and mouth when using Slazerbeam. Of course, the more one uses, then the more pronounced the symptoms are. But it is not only that which is a cause for concern.

Although at this time, there are not many reports as of yet as this is a relatively new strain, there is a chance that some people may feel a little paranoid with its use. That is because it is one of the traits of Super Lemon Haze.

To avoid any complications in an otherwise enjoyable experience, avoid using too much.

Colorado Seeds has had success with strains that are widely accepted by the medical cannabis community. One is the parent strain, Gupta Kush. It then follows that the Slazerbeam would also inherit traits that are useful to patients.

One of its best benefits is the ability to induce happiness and overall general sense of well-being. Hence, it helps in squashing stress. It can also help people with depression manage their mental health issue.

Because it seems to keep energizing users making them more productive, it can be used to combat fatigue as well.

As for pain relief, it does not have the same numbing sedative-like properties of other strains. So, at best, it can only be useful in mild pains and aches.

Slazerbeam is an easy strain to grow, according to Colorado Seeds. Having said that, it does need a little bit of work but nothing that even beginners cannot handle. It also grows well enough outdoors or indoors.

One peculiar thing about this strain is this. While growing it from a batch of seeds, it may result in two phenotypes where one is shorter and the other one taller. One possible reason for that is because the roots of the shorter one are slower to grow. Hence it is shorter, in the first place. Meanwhile, for the taller one, the breeder recommends topping it early.

Inside the house, the plant should grow fine using hydroponics. Although the shorter phenotype can have a week earlier, the recommended flowering time is at least 8 weeks. Each square meter may have a yield of 10 to 12 ounces.

Flowering time for the Slazerbeam when planted outdoors is during the first week of October. Each of these plants can produce at least 12 ounces of buds.

Have you ever smoked or grown your own Slazerbeam? Please let me know what you think about this marijuana strain in the comments below.