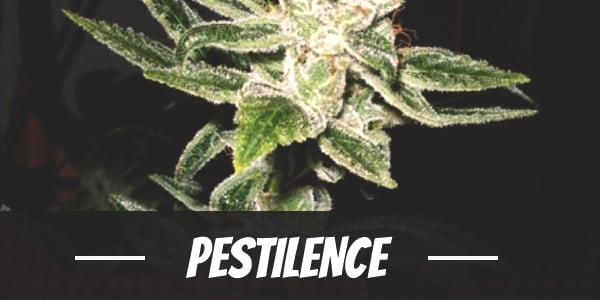 The Four Horsemen of the Apocalypse sounds ominous. Immediately, what comes to mind are wars and famines, destruction and death. So, why the hell would anyone want to have anything to do with that? The answer to that question is simple. Pestilence destroys those that keeps one on edge.

In a sense, Illuminati Seeds did well in choosing Pestilence for its name. For the uninitiated, he is the first of the four. To create something that can wipe out stress, the breeder used two notorious strains.

West Coast Dawg, a descendant of Chemdawg, is one. Among the traits that made it famous is its powerful sedative-like effects. Meanwhile, the other strain Abusive OG sounds vicious but is, in fact, a gentle yet potent strain. It helps people deal with stress and pain, but at the same time, can cause mental haziness. Both of these parent strains are Indica-dominant, a trait passed on to Pestilence.

No one knows when the four horsemen will come. Given a choice, no one wants them to. But in the case of Pestilence, people who used it wishes it could be more accessible. Unfortunately, it may prove to be elusive. One of the last things we learned is that the breeder has gone underground.

Although it is possible to find an online reseller of its seeds, there is a high chance that it is a fake.

Due to the difficulty in finding Pestilence in dispensaries and seed banks, we do not know all its traits. For instance, we are not aware of its THC content having undergone lab tests. From how its past users describe it, we do have a fair idea of what users can expect.

On its onset, most people feel a gentle rush of uplifting sensation. It further continues to weave its spell by unlocking creative thinking. Rather than draining the soul and sucking out the life force, Pestilence also delivers an energizing buzz. Soon enough, most users find themselves feeling happy and able to function.

Like many others, its Sativa effects may have made its presence felt first. Not only that, but many of its users also note how from happiness, they became euphoric. As the mood-altering sensation creeps in on the body, it becomes evident to users that the strain does pack a punch. Negating some of the mental effects, Pestilence makes people feel relaxed.

Soon, the users find themselves too relaxed to move. In essence, they are confined to where they are and unwilling or reluctant to move. As a result of the inactivity and pure bliss, it is not long before their eyelids become heavier than usual. In other words, it makes people feel drowsy, and most people end up falling asleep without a thought or even knowing.

Upon waking up, there better be foods nearby. It is because the strain causes users to feel very hungry.

Instead of smelling like burned fuel or death, the air in its environment brings with it an earthy with a note of coffee and caramel.

There are no surprises here. Pestilence has a sweet taste laced with coffee, caramel, and vanilla. It may not be famous for its flavors but were it not for the difficulty in finding it in the market then that is one area where it excels.

As mentioned, there is not a lot of materials or user feedbacks. As such, it is not easy learning of its benefits. But using marijuana, if one were not careful, might lead to obvious symptoms that are more annoying rather than harmful.

As one can expect, Pestilence is cannabis. Hence, cotton mouth and dry eyes are two conditions that may manifest. It is not a big deal, though, as they do not cause any real harm. Drinking a lot of water can help, but the most important thing is to use well within limits.

In some cases, the buzzing effects some feel may be a little overwhelming. As such, they might feel a bit dizzy. It should not last long, though.

The pestilence of the cannabis community is not going to kill anyone. What it seeks to destroy are the negative thoughts that are causing too much stress. For this reason, we assume it is also useful for people with mental health concerns.

Pestilence delivers a massive sedative-like effect on users. Because of that, patients suffering from chronic pains and aches will find it useful. Of course, such trait also has other reactions. One is that even before its effects have faded away, most people feel sleepy. People having a hard time falling asleep will be happy to know that.

Pestilence can also stimulate appetite. Since most people end up sleeping without intending to, then they wake up feeling extremely hungry. Other uses of the strain include managing nausea and headaches.

As alluded to, we do not know much about this plant as it is relatively new compared to others. So, anything we can say about its cultivation is based on a few factors including taking the parent strains.

Pestilence does not need to get on a horse. Instead, it is possible to cultivate some regardless if it is outdoor or indoor. Either way, this plant tends to grow more like a typical Indica strain.

We know that growers can trigger the bloom stage by changing the light cycle. Instead of turning on the lamp for 18 hours during the vegetative stage, it can now follow the 12/12 period on the tenth week. After triggering the flowering stage, it will not be long before it is ready for harvesting. Our estimate of its indoor yield ranges from 8 to 14 ounces per square meter.

At some point during October, this cannabis plant will begin its flowering stage. Tended to with care, the Pestilence offers backs an average yield of buds in the vicinity of 14 ounces per plant.

Have you ever smoked or grown your own Pestilence? Please let me know what you think about this marijuana strain in the comments below.