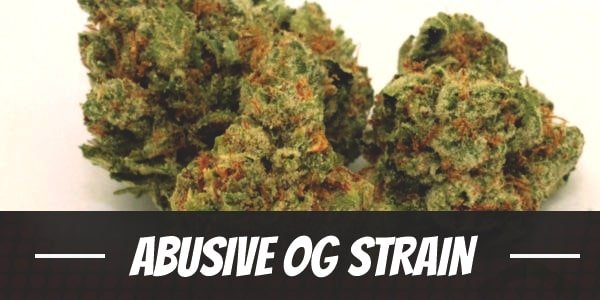 In the west coast of USA, it is a sin for cannabis connoisseurs not to have heard of OG Kush. As a matter of fact, since it became available more than two decades ago, breeders had used it to create new hybrids. Today, not even the experts can say how many strains came to exist because of OG Kush.

Among the strains that came out from its line is the Abusive OG strain. Despite its sinister name, the effects it delivers is complete relaxation. But make no mistake about this strain. People who try to use a little too much will find themselves being abused by the hybrid, in a good way, of course.

Abusive OG is a cut from OG Kush. As such, it retains much of the traits of the legendary strain. There is also some confusion in how potent the strain is at best. For instance, in most tests, its THC content hovers around the 18% to 19% range. But at least one source claims that its THC content is up to a whopping 32%.

Another confusion is in its CBD content. In most tests, it hovers in the 0.3% range. But there are also sources claiming it is between 2% to 5%. On that note, it is better to stay on the conservative side. Use only a small amount, in the beginning, to test it first.

In spite of being an Indica strain, Abusive OG still delivers a little Sativa-like effect. For instance, once it starts to manifest itself, users often feel a gentle buzz in the head. Soon, a warm, uplifting feeling starts to creep in causing some to feel happy, or even euphoric.

These effects often last for at least a couple of hours. Even at the more consistent figure of 17% to 18% THC, that is more than potent enough to cause most users to feel lazy. At the same time, there is a high chance of not wanting to move at all. Finally, before the effects ultimately leave the body, sleepiness follows.

The variations in the measurement of THC content is understandable. Each plant cannot be grown the same. Not to mention, different people are cultivating the same cannabis plant. As such, it is normal to see its potency level fluctuate. But one source cites that the Abusive OG consistently measured at 32% range. Because of that, it is best to be cautious when using this strain.

It does not matter if the user is a beginner or very experienced. An extremely potent cannabis is not to joke around with, so always stay on the safe side.

As expected, of course, the Abusive OG, being a cut of OG Kush, would smell the same. For those who are familiar with OG Kush, then the earthy and skunky odor with a hint of lemon should be recognizable.

It may smell like a skunk mixed with earth. But it does not carry over to its taste. Instead, Abusive OG has both a sweet and spicy flavor with the added blend of lemon herbal tea.

There is not much to be concerned about with the use of Abusive OG. It does come with the customary dry mouth and eyes if one were to use too much. Such is the price to pay when using marijuana and to use a tad bit too much. Note that these symptoms may be present even when using in moderation. As such, the best way to deal with it, or avoid experiencing is also to drink a lot of water.

The heavy body buzz it delivers to users may also cause some people to feel a little dizzy. It’s a rare occurrence, but if it does, it only lasts for a few minutes.

Abusive OG is a master of the body buzz. It also contains some analgesic properties which benefits patients will illnesses. For that reason, it is sought after for its pain-relieving properties. At the same time, by inducing body relaxation, it helps in reducing stress levels too. In some ways, this may be helpful for patients with depression.

The heavy hitting Indica is almost guaranteed to induce drowsiness. For that reason, it is not the best strain to use to begin the day. But on lazy days or during evenings, it makes for a great companion before calling it a day.

The choice of cultivating Abusive OG cannabis plant could be outdoor or indoor. In both areas, the plant does seem to thrive well. Also, because it is a forgiving plant in that it is tolerant, it makes for a good strain for beginners in cultivating marijuana.

A beautiful thing about its dense forest green buds covered by a fine layer of crystals and orange hairs is this. Around the time of flowering or just before, if exposed to lower temperature, it may some blue and lavender hues appearing on its leaves.

Tokyo OG is a short and thick growing plant with strong indica effects, albeit being energizing. Read our full review!

Although there are seeds available online, some people are warning others to only buy from trusted sellers.

Being an Indica strain, we can expect it to have a short flowering time. At it turns out, Abusive OG is ready in as little as eight weeks. At this period, each square meter can have a yield of slightly over .

For beginners, it is easier to grow Abusive OG outdoor where it is resistant to mold and mildew. When September transitions to October, the plant should also be ready. Each of them can yield around 8 ounces or more.

What is the Abusive OG strain yield?

How much THC does Abusive OG have?

What are the origins of the Abusive OG strain?

Have you ever smoked or grown your own Abusive OG? Please let me know what you think about this marijuana strain in the comments below.