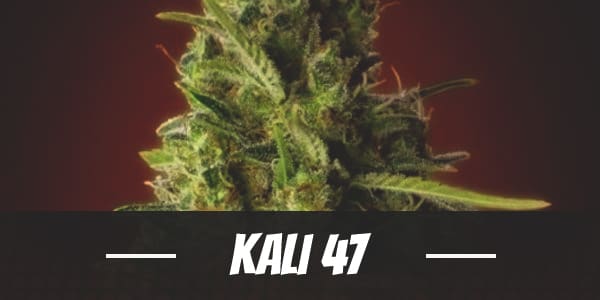 It is easy to determine a plant’s heritage by examining its name. After all, many breeders prefer using a designate a portion of its parents’ name to the hybrid developed. Kali 47, for example, is obviously a reference to the two industry mainstays – Kali Mist and AK-47. After all, top breeders such as Advanced Seeds would prefer using strains that have created an impact on users all over the world.

Kali Mist is believed to have emerged around the 1990s. Although that fact is disputable, no one can argue that it has remained a popular choice among enthusiasts for its energizing buzz that not only promotes mental stimulation but also clarity. AK-47, on the other hand, is a Sativa-dominant bud that maintains a sturdy structure.

In combining the two, Advanced Seeds produced the ever-popular Kali 47. Like its parents, it is highly potent with THC levels test as high as 19%. It induces a fast-acting, long-lasting high which encourage deep thinking as well as better movement. Not only that, it inherits the hardiness of its guerilla parent.

By now, it should come as no surprise that a Sativa-dominant strain like Kali 47 hits fast. In just a few puffs, it swarms the mind with a rush of euphoria that may be too intense for some. This is not to insinuate the beginners should avoid high THC herbs, but that all enthusiasts, regardless of experience, should use the bud with caution as it can be quite overwhelming.

The effects are almost immediately visible once the initial onset has begun. Smiles seem to grow brighter as an innate sense of happiness radiates from the inside out. The resulting clarity, as one’s worries dissipate into thin air, is also a catalyst for creativity.

An influx of profound thoughts floods the mind as users begin to wander off in the land of rumination. It is not uncommon for innovative ideas to emerge during this time. In fact, some even take advantage of its mentally stimulating effects to come up with solutions or reach conclusions to work-related problems. In any case, the added cerebral upliftment is a welcome addition to one’s daily routine.

Usually within an hour or two, the strain’s physical effects begin to manifest. It starts as a light pressure from behind the temples that ebbs down to the rest of the body. With each puff, it gradually intensifies until it develops into a surge of energy that reinvigorates tired muscles. Through it, users stay upbeat and alert throughout the day.

Its energizing effects, as well as wake-and-bake qualities, make Kali 47 a great daytime companion. At night, it can be used to spice up conversations at social gatherings like parties.

Kali 47 has a pleasing aroma with sweet overtones of vanilla accentuated by a familiar note of caramel. Broken apart or combusted, a candied fruity scent fills the room.

Kali 47’s taste is equally as pleasing as its smell. When first drawn in, it is delightfully sweet. Overtones of vanilla and caramel accentuate its candied flavors. On the exhale, fruity undertones of citrus wash over the mouth.

A cottonmouth and red eyes are two unavoidable reactions that come with using Kali 47 or any strain for that matter. Though many users ignore for its mildness, the dry spell is still a source of discomfort for beginners. Staying hydrated, however, will help manage such effects for as long as it persists.

It is always best to practice caution while using a high THC strain like Kali 47. This is because overconsumption usually leads to negative side effect such as ‘greening out,’ which is a condition characterized by temporary dizziness due to heightened perception. At times, it can also trigger anxiety to the point wherein users may feel a little paranoid.

Presumably, Kali 47 was developed to cater to recreational users. However, this does not diminish its medicinal potential. In fact, through the combined effects of its THC, CBD, and other cannabinoids like terpenes, it provides a reprieve against a variety of mental and physical afflictions.

In inducing its happy high, for example, Kali 47 reduces high stress levels which can complicate already existing health conditions such as hypertension. It can also accelerate the onset or further development of depression. For this reason, the Sativa-dominant herb can also be used to alleviate symptoms of said mental health issue albeit temporarily.

Meanwhile, Kali 47’s stimulating effects make it a great choice for relieving mental and physical fatigue which is usually a result of chronic stress. However, in relaxing the body, it effectively reinvigorates users a well as gets rid of the various pains that come with over exhaustion.

Climate and location are two important factors to consider when growing Kali 47. Like other Sativa-dominant strains, it prefers the warm, semi-humid weather of many Mediterranean regions. The constant sunlight is also a source of essential nutrients that help the plant yield high as it stretches up to 10 feet.

In spite of this, it still grows well when exposed to the colder weather of countries north of the equator. AK-47’s influence on the strain makes it hardier compared to other predominantly Sativa-leaning strains. Still, there are many commercial growers who would like to make the most out of the plant by growing it indoors.

Controllable environments make mimicking a Mediterranean climate easier for growers as factors such as temperature, lighting, and humidity are readily adjustable. However, due to its growth spurt during the flowering phase, many are prompted to top the plant early or cut the vegetative period short so its height is easily managed.

Luckily, Kali 47 is available in feminized form which assures aspiring growers harvest a full batch of female plants each time.

Kali 47 is the ideal strain for Sativa loving growers with little patience. It has a short flowering period of 7 to 9 weeks with each square meter producing between 14 to 16 ounces of buds. Applying the Screen of Green, as well as delaying harvest, will encourage the plant to yield more.

In the northern hemisphere, Kali 47 usually blooms from the last week of September to the second or third week of October. Once ready for harvest, it yields at least 16 ounces of buds per plant.

Have you ever smoked or grown your own Kali 47? Please let me know what you think about this marijuana strain in the comments below.