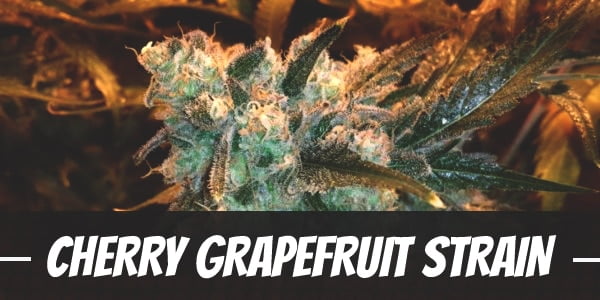 Cherry Grapefruit is quite a unique strain. Not just because of its sweet-smelling terpene profile but also for its lineage. Rather than being a by-product of two parents, the Indica-dominant is hybrid is a rare four way cross of legendary herbs.

In creating Cherry Grapefruit, Kera Seeds combed through the list of top strains that dominated the industry for many years. And, what better choices were there than OG Kush, Chemdawg, Sour Diesel, and White Widow? The first is the backbone of many Californian strains. The second and third are revered for their one-of-a-kind smoke and effects. Meanwhile, the latter is a sturdy plant with impressive trichome production.

Combining all three resulted in the fruit-flavored Cherry Grapefruit which is quickly gaining traction in Europe, Canada and the USA. Like its parents, its highly potent THC levels of 20% is alluded to by its heavy coat of resin and trichomes. Often, it is experienced users that enjoy its full effects but beginners may still try it with the help of a seasoned friend.

Fast-acting and long-lasting are two words that best describe Cherry Grapefruit’s effects. Almost immediately after the first two to three puffs is an uplifting buzz that swarms the mind and invigorates users through and through. But, unlike other strains, its head and body high last long after the last puff.

Its initial onset inspires a sense of happiness from within and boosts mental stimulation. As a result, a creative spark ignites a free flow of thoughts which eventually form into profound ideas or innovative solutions that help users out of a rut.

In time, a tingling sensation manifests from behind the eyes. It soothes each muscle as it spreads throughout the body in waves. In spite of its intensity, it is not at all numbing and neither is it sedating. In all likelihood, the deep relaxation glues users to their seats to work on tasks for longer periods of time without breaking concentration. Lounging about on the couch is also an option for casual users though.

Cherry Grapefruit makes for a great mid-morning or early afternoon because of its great wake-and-bake qualities. It is best to use it in small increments though as too much can interfere with the day’s schedules and obligations.

Cherry Grapefruit is a pungent strain with overtones of apple, apricot, and cherry. Blending with it is an undertone of wet soil which make the bud seem freshly picked from a grove of fruits especially when it is crushed or combusted.

Cherry Grapefruit, as its name implies, tastes like fresh cherries and ripe grapefruit. Hints of apples and apricots also present itself when the bud is savored. On the exhale, an earthy aftertaste lingers in the mouth even after the last puff.

Users always experience a cottonmouth while using Cherry Grapefruit. Typical of marijuana, it contains cannabinoids that interfere with the body’s ability to produce saliva. Though the dryness usually subsides on its own, the discomfort can be bothersome. In such cases, it is best to down a few glasses of water or stay hydrated throughout and after the high.

Stress relief is among the top cited reasons as to why enthusiasts turn to marijuana. And, to this end, Cherry Grapefruit works perfectly. Its uplifting head high calms turbulent emotions and eases the overwhelming dread that those under constant stress commonly experience. For the same reasons, it is also used as an antidepressant or anxiolytic to manage depression and other mental health issues such as PTSD.

On the physical, stress can also manifest as over exhaustion or fatigue. Those plagued by it usually feels random aches and pains all over the body due to strain or tension. In easing the muscles, Cherry Grapefruit relaxes the body through and through beginning from the temples

One of the best times to use Cherry Grapefruit is right before a meal. This is because it encourages a hearty appetite. As such, it is a great companion for users seeking reprieve from eating disorders such as anorexia or for patients suffering from cachexia.

Cherry Grapefruit is guaranteed to be an easy grow. From its White Widow parent, it inherited is sturdy Indica structure. The plant, too, has thick stalks and strong branches which do not break off easily either due to the weight of its heavy buds, sudden fluctuations in weather, or powerful gusts of wind. A heavy feeder, it is tolerant of nutrient burn – which is a common mistake among first-time growers.

Grown indoors, breeders may want to top the plant early or shorten its vegetative period to stunt its growth spurt. This will keep its height under control and improve light or air circulation. One may also apply the Screen of Green method which utilizes bending to encourage better trichome production as well as even distribution of light among various budding sites.

Kera Seeds sells its creation in feminized form which aspiring growers may avail of through the company website or through licensed physical stores. This hastens the growing process as one need not apply a multitude of techniques to harvest more female plants.

Cherry Grapefruit has an indoor flowering period of 9 weeks. However, it can also bloom as early as 7 or 8 weeks depending on the skill level of the grower. It should produce 12 to 16 ounces per square meter.

In the northern hemisphere, Cherry Grapefruit flowers from the last week of September to the second or third week of October. Usually, growers harvest around 12 to 14 ounces of buds per plant.

What is the Cherry Grapefruit strain yield?

Cherry Grapefruit yields 12 to 16 ounces per square meter indoors and 12 to 14 ounces per plant outdoors.

How much THC does Cherry Grapefruit have?

What are the origins of the Cherry Grapefruit strain?

Cherry Grapefruit was created from a mix of OG Kush, Chemdawg, Sour Diesel and White Widow.

Have you ever smoked or grown your own Cherry Grapefruit? Please let me know what you think about this marijuana strain in the comments below.