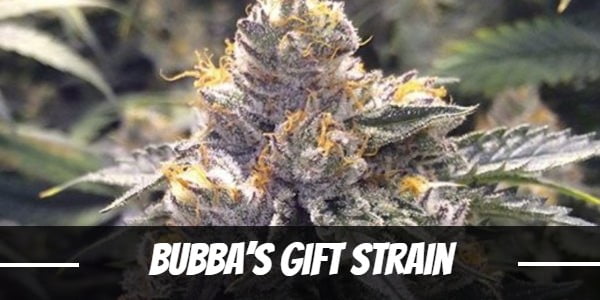 Humboldt Seed Organization truly bestowed a gift to the world when it released Bubba’s Gift in 2007. The Indica-leaning bud is an impressive strain with potent THC levels of 17% to 20%. Not only that, it is a great plant to have in the grow room. Each of its calyxes are filled to the brim with resin while its buds are covered in a sugary coat of trichome. Catching people’s attention, too, is its colorful flashes of purple and green.

Though it has not been long since it first hit the market, Bubba’s Gift has already made an impact among enthusiasts. And, rightly so. After all, it gently stimulates the mind with a surprisingly energizing buzz in spite of its Indica-dominant genes. Still, it does not fail to ease the one of aches and pains with its relaxing body high.

Of course, nothing short is expected of the Bubba Kush with God’s Gift cross. Both parents are predominantly Indica but it is from the latter that Bubba’s Gift garnered its delicious fruity flavors. Meanwhile, the dreamy euphoria as well as heavily tranquilizing effects are an obvious trait of the former.

Like many Indica-dominant strains, Bubba’s Gift has effects that take a while or about 15 to 20 minutes to manifest. Though most do not notice its creeping high until after it has set in, those who deliberately take note of the initial onset report feeling a wave of euphoria gently crashing into the mind’s shores before developing into a buzz of energy.

The behavioral change is immediately visible. A smile is painted on each user’s face as an uplifting buzz brings back joyful memories. The initial onset, which leaves one feeling genuinely happy, also prepares enthusiasts for the upcoming Indica effects of the bud by placing one in a calm disposition.

After about an hour or three, a light pressure travels down from the temples. It is the same energizing sensation from earlier. Subtle at first, it later intensifies as it frees each muscle of tension and envelops users in a deep relaxation. In all likelihood, those who overconsume the strain will feel the heaviness anchor the body into the couch.

For this reason, it is better to use the strain at night or during days off. Its hard-hitting high can interfere with work or productivity.

Bubba’s Gift has a sweet fragrance reminiscent of grapes and berries. Its fruity scent is accentuated by the aroma of wet soil which make the bud seem freshly picked especially when it is crushed or combusted.

Bubba’s Gift floods the palate with the sweet taste of ripened berries and grapes even at the first draw. Enhancing it is a faint woody undertone that turns into a rich earthy aftertaste on the exhale.

Experiencing dryness and dehydration is usually a complaint many enthusiasts have. Sadly, these effects are unavoidable as the cannabinoids in marijuana interfere with the receptors responsible for the production of moisture. The eyes and the mouth, in particular, are two susceptible areas. With that said, it is better to stay hydrated during sessions.

Sometimes, users will experience a temporary dizziness when Bubba’s Gift begins takes effect. Additionally, using large amounts can increase anxiety levels or induce paranoia. But, through pacing and moderation, users can both stay away or manage the side effects.

Bubba’s Gift belongs to one of the many medicinal cannabis products developed by Humboldt Seed Company. As such, it should come as no surprise that it contains significant therapeutic value which help patients cope with various health issues.

Looking to buy seeds like Bubba’s Gift? Check out our marijuana seed bank.

Among its best users is as a stress reliever and anti-depressant. In inducing its happy high, it enhances the mood while simultaneously clearing the mind of worries. It can also stabilize turbulent emotions which is a key factor in managing symptoms of mental health issues such as depression and PTSD.

It has positive effects on the body as well. Through its relaxing effects, it soothes away aches and pains beginning from the temples. In doing so, it not only reinvigorates users but also gets rid of fatigue and tension.

Some users begin to feel a little drowsy as the deeply comforting effects persist. And, as the beckon to go to bed grows stronger, users fall asleep and wake up feeling refreshed the next day.

Bubba’s Gift is among the easiest strains to grow in the cannabis industry. It is sturdy, compact, and yields high after a few short weeks. As such, it is a great choice for beginners. Not to mention, its stunningly alluring colors of deep green and royal purple catch the eye of many enthusiasts. And, for this reason, it is a staple among seasoned growers as well.

In spite of its hardiness, the plant is not a fan of humid climates. Its density can sometimes harbor moisture which later develops into mildew or, worse, mold. However, installing a powerful ventilation system will help aerate its growing area. It also encourages better air circulation so the plant is thoroughly dry. Slightly thinning out the plant by pruning away dead branches or leaves also helps. This will also help light reach lower-end budding sites for added nutrition.

Fortunately, Bubba’s Gift is available in feminized form. Applying techniques like the Sea of Green and Low Stress Training will help the full batch of female plants reach its full potential.

Bubba’s Gift has an exceptionally short flowering period that usually lasts about 6 to 7 weeks. However, many growers prefer delaying it by a week to increase yields. Still, even if one were to harvest early, it would still produce an impressive 14 to 21 ounces worth of cured buds per square meter.

Garden grown Bubba’s Gifts flowers exceptionally well with yields ranging from 35 to 106 ounces of buds depending on the climate, location, and skill level of the grower. Usually, the plant blossoms from the middle of September to the first week of October.

Have you ever smoked or grown your own Bubba’s Gift? Please let me know what you think about this marijuana strain in the comments below.

What is the Bubba’s Gift strain yield?

How much THC does Bubba’s Gift have?

What are the origins of the Bubba’s Gift strain?

Bubba’s Gift was created from a mix between Bubba Kush and God’s Gift.